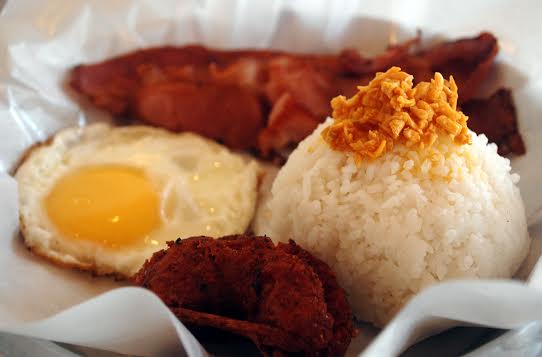 The tortillas are satisfyingly crunchy even when slathered with cheese and a good few minutes have already passed, and the jalapeños are plentiful (you can ask for less if you’re not so hot on spicy food).

The nachos are good enough for a meal, but we’re Filipinos and, as hearty Asian eaters, there’s one thing that can truly satisfy us: rice.

The bacon strips are perfectly crispy and huge. The longganisa, meanwhile, is tasty and a perfect complement to the eggs and rice.

With 64 branches around the country and counting, Army Navy has already made a name for itself as a favorite food stop for hungry Pinoys.

In 2009, the first Army Navy branch opened in Tagaytay City. It was here where the owners decided on the military-looking concept, including its menu and recipes.

The Bully Burger, a humongous serving of three patties, one on top of the other, was described as the result of American sailors’ intense love for beef.

The restaurant’s famous iced tea, the Libertea, was a playful take on the term used by US Army servicemen for their 48-hour shore leaves.

Soft and hard tacos are also offered, as well as Mexican quesadilla.

Dessert is also something to look forward to. My favorite is the Freedom Toast, a deliciously fluffy and chewy egg-dipped, fried bread brioche, slathered with blueberries or maple syrup, and then topped with vanilla ice cream.

It is, in my opinion, the best-tasting a la mode-style fried bread dessert out there. Surprise—its price has been slashed from P99 to P65!