Suddenly, sneakers are for the boardroom | Inquirer Lifestyle ❮ ❯ 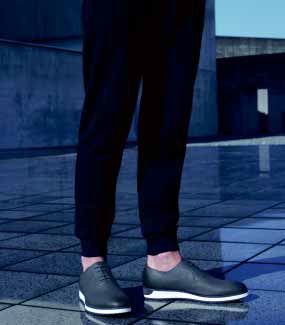 Relaxed sartorial codes, or the concept of "athleisure," have made tracksuits and sneakers acceptable outside the gym. Rubber-soled derby shoes from Pedro. (Photos courtesy of Pedro)

Suddenly, sneakers are for the boardroom

Hear this out: Sneakers are now deemed appropriate for the boardroom.

The fashion buzzword is “athleisure,” that marketing concept that has elevated tracksuits and running shoes to a whole new category.

Put simply, it’s activewear and shoes  designed and styled to go beyond their use in the gym—into the streets, and even to the office.

People these days go about their daily lives at such a fast pace, sprinting from one activity to the next, that abiding by old sartorial codes has become not only fusty but also unrealistic. So why can’t you go to that cocktail party in your leggings? Or to that contract signing in your trainers?

This has been the trend in recent seasons, from luxury to high street. Think Chanel and Dior and their much-coveted sneakers, or Alexander Wang designing an entire collection for H&M centered on gym clothes.

Pedro, the sister brand of the more famous fast-fashion Charles & Keith shoes from Singapore, has rolled out the Spring-Summer 2015 collection of men’s shoes that have athleisure written all over it.

Imagine double monkstrap shoes, but instead of the usual buckle straps of the dressy footwear, they have plastic push locks akin to  adjustable straps used in luggage and backpacks. They’re in two-tone black synthetic material  suitable for a workwear suit (though they also come in other colors—all-white, for instance), but have rubber soles that make them comfy enough to run around in from one meeting to the next.

There are also rubber-soled derby styles that can take men from commute to elevator, as well as casual-to-workwear plimsolls and slip-ons.

Pedro, distributed locally by Suyen Corp. and with nine outlets to date, is Charles & Keith’s “more polished” sister, according to company executive  Sherleen Lim, who was in town to present the new collection. It’s designed primarily for the 25-and-up demographic, yuppies or corporate warriors.

It has men’s totes and clutches, and a distinctly large black backpack that has business written all over it.