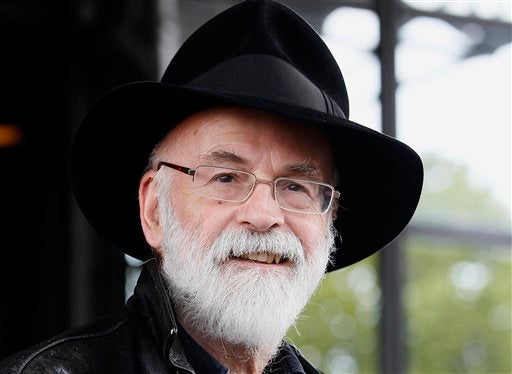 LONDON—Fantasy writer Terry Pratchett, creator of the “Discworld” series and author of more than 70 books, has died. He was 66.

Pratchett, who suffered from a rare form of early onset Alzheimer’s disease, had earned wide respect in Britain and beyond with his dignified campaign for the right of critically ill patients to choose assisted suicide.

Transworld Publishers said Pratchett died Thursday at his home, “with his cat sleeping on his bed surrounded by his family.”

Transworld’s managing director Larry Finlay said “the world has lost one of its brightest, sharpest minds.”

Pratchett’s ability to write and speak had deteriorated in recent years as the disease progressed. But with his characteristic black fedora and neatly trimmed white beard he remained a familiar figure in the public eye. He completed his final book in the summer of 2014.

Pratchett was best known for “Discworld,” a series of more than 40 comic novels set in a teeming fantasy world. He has sold more than 65 million books worldwide, and his novels have been translated into several dozen languages.

The author disclosed his condition in 2007. His doctors at first believed he had suffered a stroke, but found him to have an unusual form of Alzheimer’s.

He tried to be optimistic with his millions of fans, assuring them on his website that the condition didn’t seem to be immediately life-threatening.

“Frankly, I would prefer it if people kept things cheerful,” he said.

As he lost the ability to write on a computer, he turned to a dictation system that allowed him to keep producing fictional works, his agent Colin Smythe said.

“It may have changed his prose style slightly,” Smythe said. “The real problem is the difficulty of revising it.”

Pratchett didn’t shy away from the emotional public debate about assisted suicide.

He used the prestigious Richard Dimbleby lecture in February 2010 to argue the logic of allowing people to end their lives at a time they chose. He said assisted suicide should be decriminalized and that suicide panels should be set up to judge cases, and offered his own case as an example.

In the lecture, Pratchett said there was no reason to believe a cure for his disease was imminent. He said he could live his remaining years more fully if he knew he would be allowed to end his life before the disease claimed him.

“I have vowed that rather than let Alzheimer’s take me, I would take it,” he said. “I would live my life as ever to the full and die, before the disease mounted its last attack, in my own home, in a chair on the lawn, with a brandy in my hand to wash down whatever modern version of the Brompton Cocktail some helpful medic could supply. And with Thomas Tallis on my iPod, I would shake hands with death.”

Pratchett was born and raised in the town of Beaconsfield, northwest of London. He described himself as a nondescript student who attended a technical high school because he felt woodwork would be more interesting than Latin. He was also interested in radios and computers.

His first short story, “The Hades Business,” was published in a school magazine when he was 13 and was published commercially two years later. He used his proceeds to buy a typewriter and wrote regularly for the rest of the life, turning to journalism and writing novels in his spare time until the success of his fictional works allowed him to concentrate on them full time.

The “Discworld” series began in 1983 with the publication of “The Colour of Magic.” It became more popular over time as the imaginary world Pratchett created became more detailed and complex.

He received a knighthood from Queen Elizabeth II at Buckingham Palace in 2009 for his services to literature.

He also contributed $1 million to Alzheimer’s disease research and urged the scientific community to make it a higher priority.

Pratchett is survived by his wife and their daughter, Rhianna.–Gregory Katz