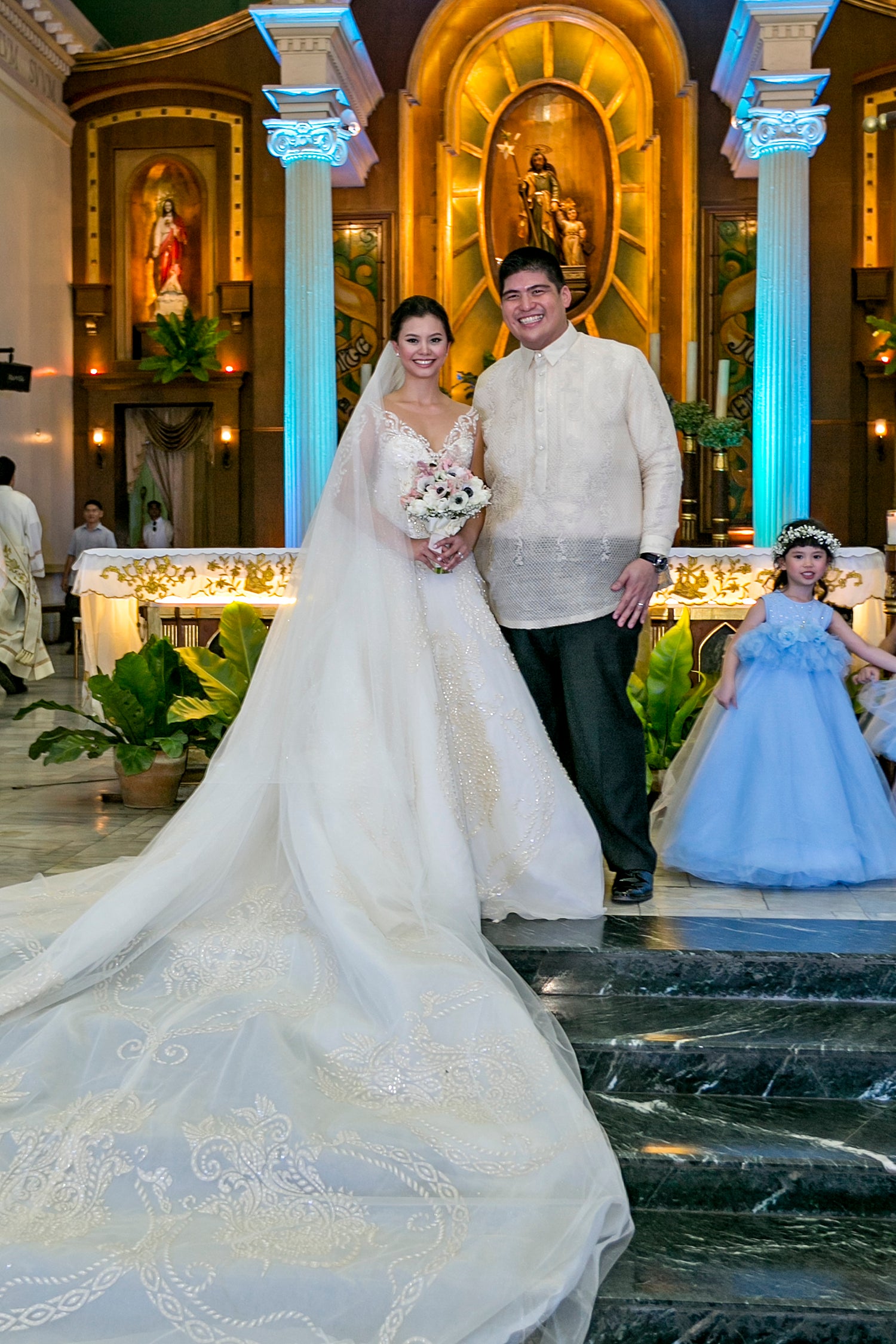 … And, if I may add… weds my tennis buddy, Ma. Carmen Carmela “Maricar” Hofileña. But that is getting ahead of the story.

But what we found notable in both the church rites and in the fun reception afterwards at the Radisson Blu was how some of the country’s young legislators—who stood as groomsmen—had fun cajoling their colleague about his new marital status.

Rep. Romero Federico “Miro” Quimbo, when he emceed the reception with Rep. Cutie del Mar, noted how “Luigi is the last man standing in Congress, the last bachelor to get married.”

In truth, Quimbo was referring only to their group of congressmen; Quisumbing was the last to get married—in their group. The others, all groomsmen in this wedding, got hitched only in the last few years.

Of course, there remain a few other bachelors in the House.

Quimbo was quick to add: “But of course, we still have the most eligible bachelor in the House, the Speaker.” Then all eyes turned to Speaker Feliciano “Sonny” Belmonte Jr., who clearly loved the moment.

“Most eligible emeritus,” the groom would tell us of the well-loved Speaker, the afternoon after his wedding as he saw us off at the Radisson lobby.

Aside from Quimbo, the other groomsmen were representatives Dakila Carlo Cua, Karlo Alexei Nograles, Mark Aeron Sambar, Lord Allan Jay Velasco and the lone nonlegislator among them, Michael Ramiro Hofileña.

“Luigi is one of the most well-liked in Congress,” Rep. Lucy Torres-Gomez told us earlier at the Radisson lobby as we got ready to go to the wedding. Torres-Gomez did the Second Reading and the Prayers of the Faithful at the nuptial Mass.

Quisumbing is also apparently well loved in Cebu, not only by his constituents but also by the province’s who’s who—the colleagues and friends of his parents Louie and Betsy (nee Romualdez) Quisumbing who see him as a good son and a very affable guy.

Only 35, Quisumbing apparently has had his eyes set on government service even shortly after school. After a stint in the family businesses (Norkis Group), he served in the Cebu provincial board, then ran for Congress. He’s on his second term.

They’re only two in the family. His sister, lawyer Julia Francesca Q. Lorenzana, got married way ahead of him. Her toddler, Javier, was the ring bearer in the stroller Congress’ ‘last man standing’ weds that carried a sign, “My favorite uncle is getting married today.” (Luigi is his only uncle.)

People say that Hofileña is lucky to have Quisumbing for a husband. We say both are lucky and blessed to have found each other. As any rom-com heroine would say—it’s fate.

“We” means the bride’s tennis buddies. The bride was working for her MBA when she joined her family’s various businesses in construction and real estate and school. The Hofileñas are a landed clan in Silay, Negros Occidental.

Maricar is an introvert on and off the tennis court (her backhand could do real damage). She’s soft-spoken and quiet—or our group is just too noisy to let her cut in—and is simple, when girls her age seem genetically predisposed to luxury brands. She wears no makeup, except for lip gloss.

Like Quisumbing, they’re only two in the family, with her sister Luchien marrying also ahead of her.

Her mom, Marilou, walked her to the altar, with her uncle, Felix Hofileña. Her dad, Luis Hofileña Jr., died two years ago at a relatively young age.

The two had known each other from way back, in high school, when Maricar was at Woodrose. She was Quisumbing’s crush. But the two grew into young adulthood in separate worlds, with Quisumbing living abroad for a few years.

They met up again last year, at the wake of Quisumbing’s grandmother, and lost no time in being together.

When the couple announced their decision to wed, it was as if half of Cebu, led by Quisumbing’s mother Betsy, went into action preparing for the big day. Betsy is known to be one of Cebu’s most fastidious hostesses, so why not for her only son’s wedding?

As early as late last year, a tour itinerary of Cebu had been prepared for guests from out of town.

A day or two before the wedding, as guests settled in their hotel rooms, greeting them was the sight of a pretty handcarry made of hard paper, on which was printed Cebu’s map, and containing the yummies Cebu is known for, starting with, you guessed it, chicharon and dried mangoes.

For the reception, the Radisson ballroom was decked in white. The stage backdrop was a transparent platform mounted on which were white blooms, from calla lilies to roses, in crystal vases. Table centerpieces consisted of white blooms and crystals, a clean setting for the small boxes in pastel blue containing the wedding keepsakes of scented candles. The decor was done by Teresin Mendezona and her partner Pinky Chang.

The bride and her entourage wore Cary Santiago. The bride’s hair and makeup was by Teng Roma.

During the Mass, someone made a quip that if some accident were to happen in the church, knock on wood, the government would skip a beat—that was how high the power wattage was of the list of principal sponsors.

Also in the wedding were Sen. Bongbong Marcos, Gov. Imee Marcos, and Rep. Anton Lagdameo. Earlier at the hotel lobby, Sen. Marcos told us how Betsy was related to the Marcoses. She’s the niece of Bongbong, making the groom his grandnephew.

President Aquino, who was announced as the guest of honor, couldn’t make it either, and perhaps disappointed his critics waiting at bay to turn the wedding into another anti-P-Noy issue.

At the reception, Rep. Quimbo had a nice aside. He said that Senator Poe was wondering why she was a principal sponsor (when she’s not that old) and not a secondary sponsor like Ejercito and Angara.

Perhaps, the whimsical Quimbo said, such leveling up was looking ahead into the “future.” (Senator Poe is said to be eyeing the vice presidency, if not the presidency, in 2016.)

And, he said, given the attendance, they could already have a House quorum. He was exaggerating, of course.

At the end of the reception, the newlyweds led the solons and their spouses in line dancing. Ejercito was a standout. He danced rather well.

Such sights and sounds make Filipino weddings an interesting sidebar to politics.