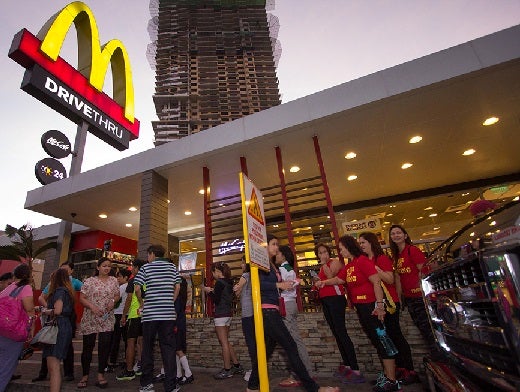 MANILA, Philippines—McDonald’s treated thousands of Filipinos to free McMuffin sandwiches on March 9 during the celebration of the biggest breakfast event in the country—the National Breakfast Day (NBD).

Close to 400 McDonald’s stores participated in the activity which started at 6 a.m. Each store gave away 1,000 free McMuffin sandwiches.

Most stores were able to serve all 1,000 free McMuffin sandwiches as early as 7 a.m.

This year, McDonald’s made NBD even more special by honoring the country’s early risers. These include PUV drivers, barangay tanods, traffic enforcers, security guards and public health workers. Each participating store gave away 100 more free Sausage McMuffin sandwiches to these early risers as a way of saying “thank you” for their hard work.

Asked why McDonald’s has been keen on encouraging people to appreciate mornings even more, McDonald’s PR and communications manager Adi Timbol said, “McDonald believes that how you start your day really dictates how the rest of your day goes. So if you start your day on a positive note and a great breakfast, you will really have a better day ahead.”

Meanwhile, McDonald’s president and chief executive officer Kenneth Yang, a self-confessed morning person himself, said celebrating NBD with everyone makes him “very energetic and happy.” In fact, in the morning of March 9 alone, he visited six stores that participated in the NBD celebration.

“On our third year of NBD, the entire McDonald’s family is happy that even more Filipinos were able to join the celebration. We hope that both our customers and our early risers enjoyed the goodness of a McDonald’s breakfast,” Yang said.