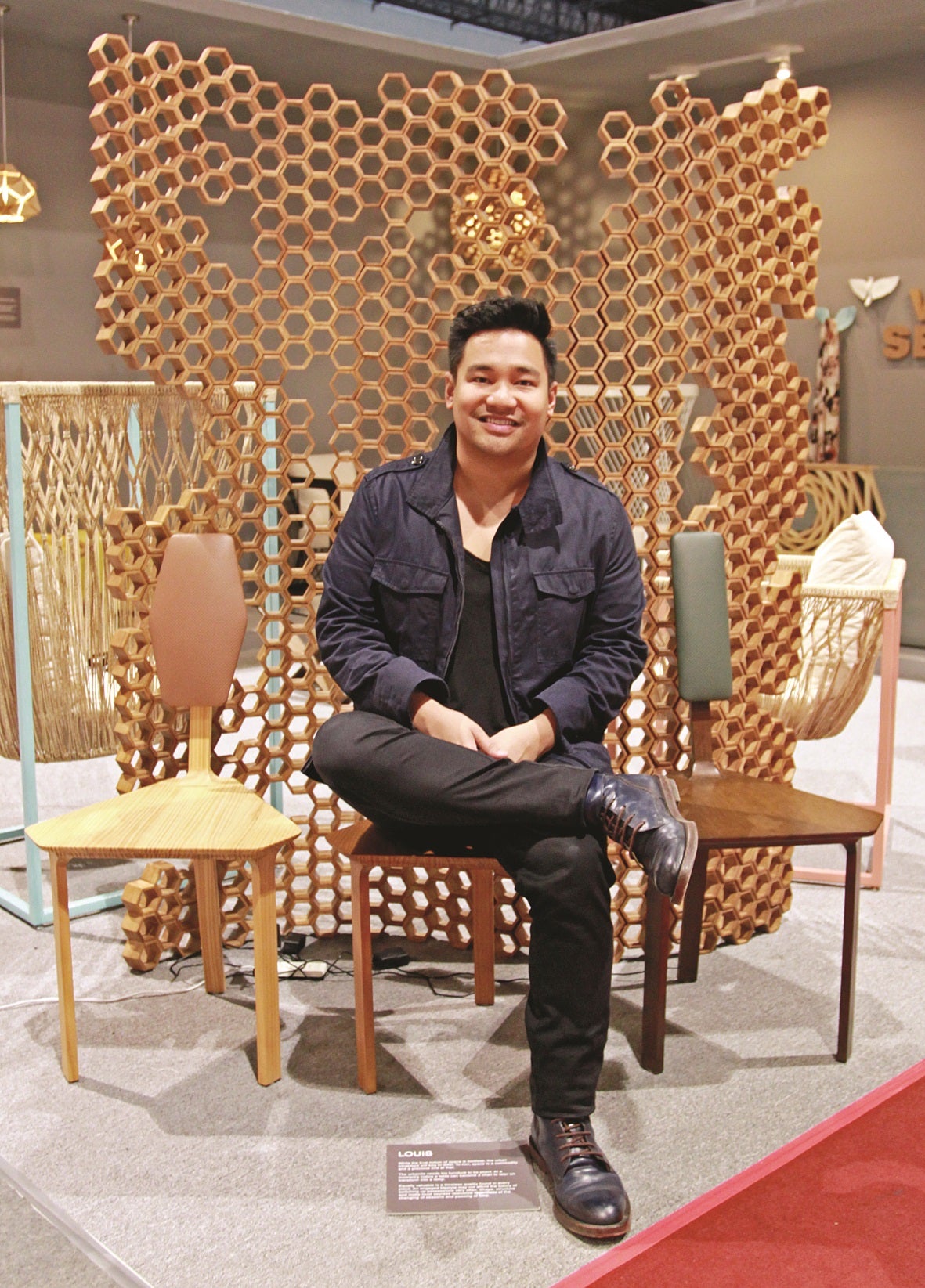 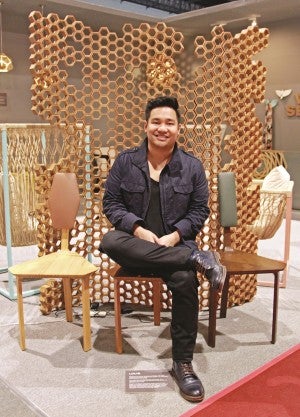 The growing popularity of condo living among Filipinos has had a huge influence on two of the four winners in Katha Awards, one of the highlights of the recently concluded Manila FAME at SMX Convention Center in Pasay City.

Apart from its sleek design, the three-legged chair made of sturdy “ethically harvested” pinewood from New Zealand doubles as a bedside table and, with a flip of its back support, night lamp.

It comes with a triangular seat with blunted edges to fit odd corners, said Selma. The back support, which comes in three shapes, is wrapped in Italian leather akin to car upholstery.

Underneath the back support is a set of cool, energy-efficient LED bulbs. The wood’s color comes either in medium or dark brown.

“I was inspired by people’s need to maximize space, especially now that space is getting smaller as condo living becomes more common and acceptable,” said Selma.

Such a modern-day challenge has become more evident for people who live in studio-type units. Most of the time, they only have enough room for a bed and small table.

“A lot of my older furniture pieces actually morph into different shapes,” he said. “Even if, say, a table changes into a different shape, it’s still a table. This is the first time I’ve designed something that can change functions.”

The set of brooms, collapsible dustpans and carpet beater— “pampagpag,” as Samson put it—come with stained bamboo handles and are anchored on a rattan frame that could be hung behind a door.

In fact, the neatly trimmed brooms, which come in such colors as orange, fuchsia, green and midnight blue, are attractive enough to decorate an empty wall.

Apart from bamboo and rattan, the duo used leather binding and plastic for the two dustpans. The smaller dustpan comes with a miniature broom designed to clean the table of food debris.

“This product is really meant for apartment living,” said Samson. “You don’t have to take out an old and ugly broom whenever you need to do some cleaning. Instead, you could use these functional accent pieces.”

It took the women almost two years to design and manufacture the product because they were bogged down by certain details during prototyping. Finding the right manufacturer for their collapsible dustpan also took time.

“We couldn’t even decide on a specific shape for our brooms,” said Samson. “Patty was always giving prototype brooms a haircut.”

Since the products have natural and handmade components, no two sets are exactly alike. E. Murio will offer replacement brooms once the original brooms that came with the set get worn out.

Evening clutches
For Best Product Design for Fashion, designer Carissa Cruz Evangelista of Beatriz Accessories won for her “Space Collection” of ladies’ evening clutches made of sandblasted and hammered brass dipped either in silver or gold.

Although she got cited for her bags, the collection also includes iPad cases, wallets and coin purses. Since there’s also a handmade component involved, no two bags look exactly the same.

And despite the collection’s name, Evangelista’s clutches are modern, but not futuristic. She considers them timeless.

“They’re something you could probably use in the 1950s up to now, and still manage to look modern,” Evangelista said.

She and 11 other designers were part of this edition of Manila Wear, a grouping selected and curated by New York-based Filipino-American designer Josie Natori for Manila FAME.

The group tasked to judge the Best Product Design for Holiday Décor and Gifts found no deserving winner in the category.

Rounding off this edition’s set of winners was Maricris Floirendo-Brias, creative director of Davao-based Tadeco, who won Best Booth Display.

Given by Manila FAME, the country’s leading lifestyle and design show since 1983, the biannual Katha Awards recognize new and sometimes groundbreaking designs in the said categories.

Like in previous years, this edition’s contest (Manila FAME is held every March and October) was open to all exhibitors and designers. Rosevi Gaetos, executive director of Manila FAME, invited separate sets of judges for each category.