Who should have won Bb. Pilipinas 2015–according to Super readers | Inquirer Lifestyle ❮ ❯ 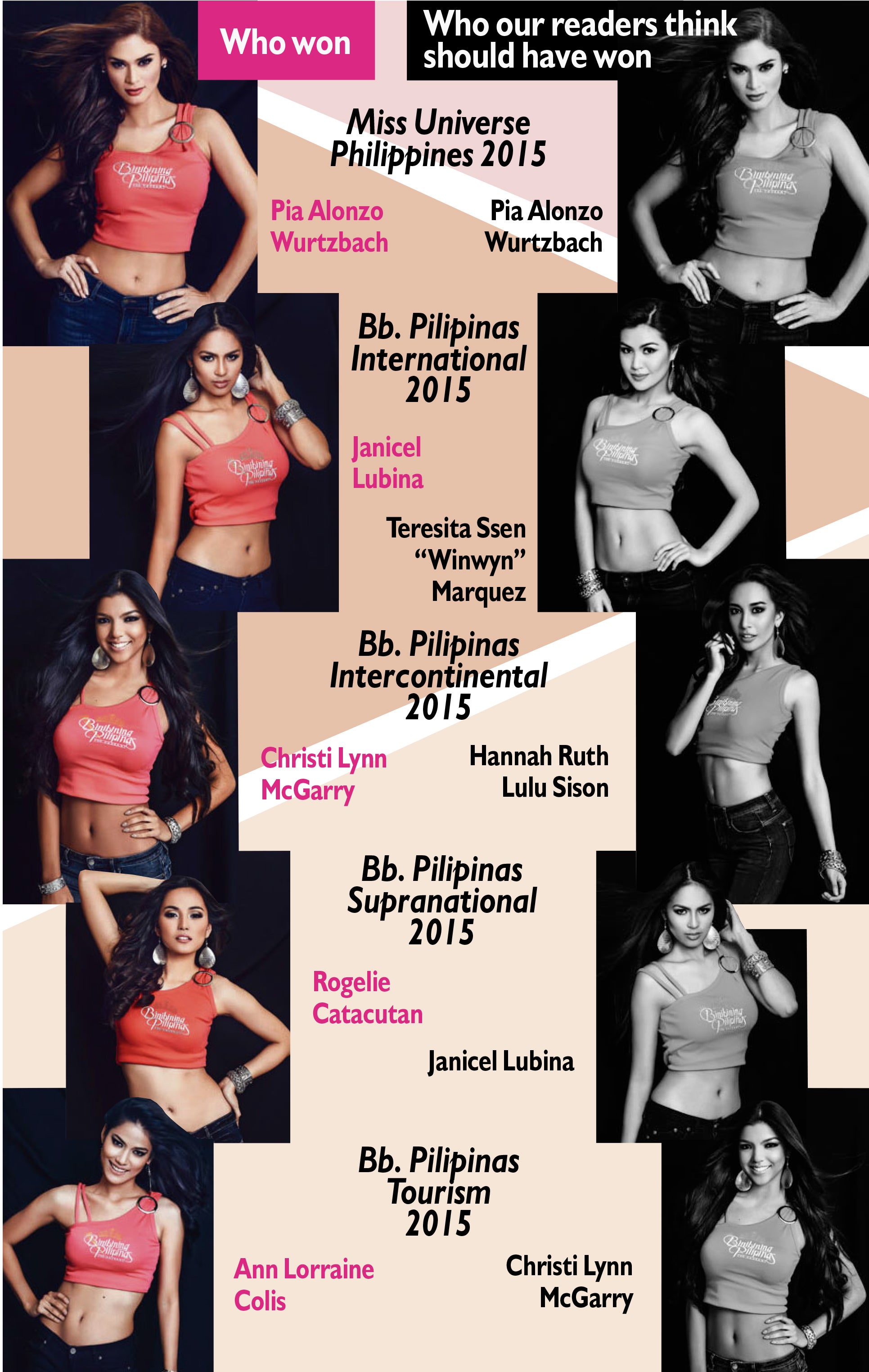 Who should have won Bb. Pilipinas 2015–according to Super readers

A few days later, our online poll drew hundreds of entries, and an overwhelming 90.53 percent of the respondents placed Binibini 10 (Pia Alonzo Wurtzbach) in their magic circle. To our fellow non-math geeks, that’s, like, 9 of 10 people saying she’d score a crown this time—her third and last try. (One of us has a sister, a heavy Pianatic, and that sister cried a river Sunday night.)

If this poll were to be an indication, there’s just so much love for Pia. Just next to her in pre-pageant photos, Janicel Lubina landed in second place, with 75.23 percent of respondents believing she would go home with one of the crowns.

The 19-year-old ex-kasambahay from Palawan could have easily done that, because among all 34 candidates, she was best in both swimsuit and evening gown, and had the crowd’s backing at the live show.

Oh, if only she did better at the question-and-answer portion. She would have been some sort of Venus Raj Take 2 at Miss Universe

We understand the liking for this girl, who makes Nabua, Camarines Sur, sound like a gated community in upscale Makati. 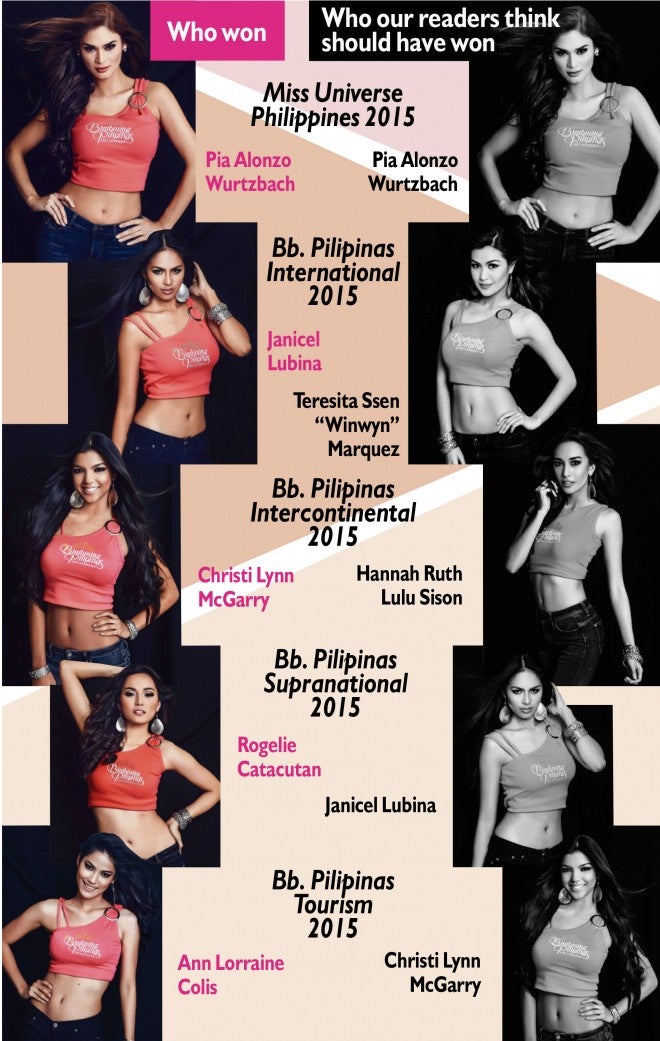 Who would win Miss Philippines Universe 2015, we asked. Some 33 percent believed Pia would take it home. They were right.

A close 26.4 percent of the votes went to Janicel, while 11.1 percent thought Christi would bag it.

Pia also emerged on top when we  asked who should win Bb. Pilipinas International; 23.3 percent chose her for the title.

For this crown, Teresita Ssen “Winwyn” Marquez got the second highest number of votes—18.6 percent. Christi was again in third place with 14.2 percent. Janicel, who eventually won Bb. Pilipinas International, got 10.4 percent of the votes.

Pia was named Bb. Pilipinas Intercontinental by 21.9 percent of the respondents while 17.7 percent picked another third-timer, Hannah Ruth Lulu Sison, who ended up winning first runner-up—or the biggest heartbreak of 2015, since it was her last outing. Kylie Verzosa was chosen by 9.8 percent.

Christi, who won in the actual pageant, was picked by 6.4 percent.

Rogelie Catacutan, who won Bb. Pilipinas Supranational on coronation night with her “love is more of feelings” (which does not sit well with both of us), had received only 2.2 percent in the same category at the online poll, her second highest rating by 0.2 percent, or just two votes lower than her Miss Intercontinental votes. She was just not popular with the fans.

Our readers picked Hannah as the winner of Bb. Pilipinas 2015 Tourism—she got 16.8 percent of the votes. Winwyn came in second, with 14.6 percent. Christi got 13.3 percent.

The girl who really won, Ann Lorraine Colis, had only gotten 3.3 percent of the votes, equal to her votes for Miss International. She had only 7.3 percent for Miss Universe, which we do not understand because she is very, very pretty.

At the end of the pageant night and for days to come, a lot of people—especially through rants on Facebook and Twitter—were asking one question: What happened to Winwyn? Why didn’t she win? 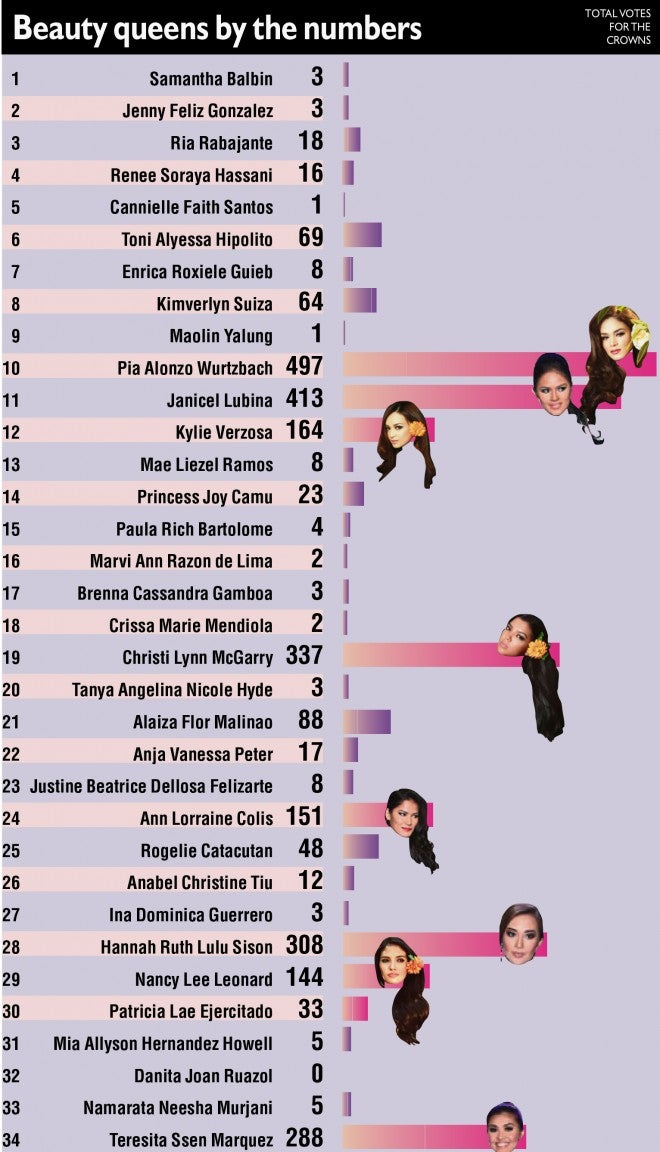 He predicted 3 out of the 5 Bb. Pilipinas winners

We’ve received entries from across the country, and as far as Afghanistan, Saudi Arabia, Libya, Canada, US and the United Kingdom. Sadly, no one succeeded in predicting the five Binibining Pilipinas winners correctly. The closest guesses were from three Inquirer readers who each made three correct picks. Using a random online drawing system, we have selected the person who will receive P10,000 gift certificates from SM Beauty, P5,000 gift certificates from Bench and a new phone from O+ Philippines.

Congratulations to Roland R. de Guzman of Rizal province! You were right, Pia Alonzo Wurtzbach, Janicel Lubina and Christi Lynn McGarry made it. We will be in touch about how you can claim your prizes.