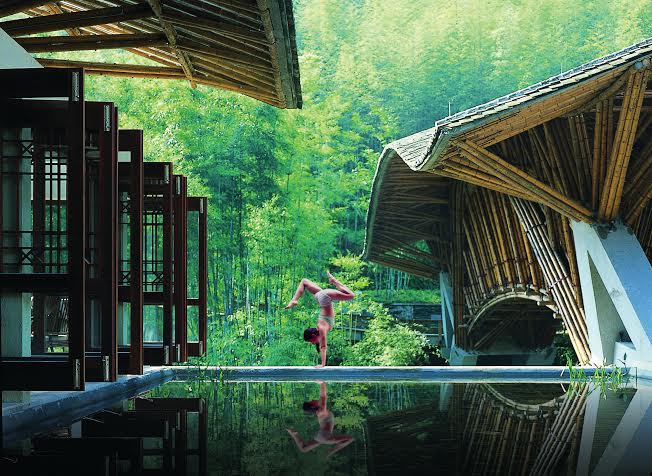 THE FENG SHUI principle of water and prosperity is reflected in Crosswaters, an ecolodge in China.

In 1977, Kenyan-born Indian Hitesh Mehta fell in love with Tagaytay’s bucolic countryside—the volcano in a lake, the pine-covered ridges, grassy open fields and the cerulean skies.

“It was my first time to see a lake within a lake,” he recalled, referring to the lake in the crater of Taal Volcano.

An accomplished cricket player, Mehta is in Kenya’s Hall of Fame in sports. He is also an architect. The Kenyan team was on an Asian tour, and the   Philippines was part of the sightseeing adventure.

Although tourism generates income, it can also leave damaging effects on the environment.

Mehta has been touring the globe not only to design ecolodges but more so to impart the principles of ecotourism. He has been named one of the world’s five Sustainable Tourism Pioneers and is on Men’s Journal list of “25 Most Powerful People in Adventure.”

In 1994, he wrote the first research paper on ecotourism, “Towards Ecolodges in Kenya.” It revealed how traditional lodges and resorts were poisoning the rivers, affecting the lives of the Maasai tribes, the crocodiles and the hippos.

In 2007, he left his architecture job and traveled to six continents to write “Authentic Ecolodges,” the first book on sustainable tourism accommodations.

“My job is to connect your soul with nature,” he said.

One reason for the popularity of ecotourism is that travelers are now seeking unique experiences. “If you want to do something great, you’ve got to give people something they won’t forget,” he said.

Mehta visited the country recently to conduct the Ecolodge Planning and Design Workshop and Charette, organized by the grand dame of travel and trade, Mina Gabor, and architect Emmanuel “Manny” Miñana.

The workshop aims to win over the architects and designers to adopt a holistic, albeit metaphysical, approach to tourist facilities.

Raised as a Jain, he adopted the principle of nonviolence as foundation for his guidelines in building a sustainable environment.

In his lecture, he showed his disdain for a posting of a woman who had killed a lion after it had been drugged, and a picture of trophy animals that had been beheaded and displayed on the wall.

Mehta said tourism should shift from being homocentric—“We decide as humans and everything else is beneath us”—to ecocentric. “We are one planet. How can we deliver a project that benefits all.”

He cited the three main pillars of sustainable, low-impact tourism.

Protection of nature. It should preserve the natural wildlife, indigenous plants and water supply, not endanger them.

Benefits the local people. Locals should be involved in the construction and operation of facilities since they know the place better. A common practice is to use local guides for tours. “You save money and help the local economy if you bring their expertise,” said Mehta.

Offering interpretative programs. Tourists should be exposed to cultural programs, nature-based recreation and outdoor activities such as local dances, bird watching and crafts.

Ecotourism started in Kenya when the species at the base of Mount Kilimanjaro, the highest peak in Kenya, were being threatened by human contact. The government has since been vigilant about protecting its natural attractions and not disturbing the ecosystem.

The activities, whether snorkeling in the Indian Ocean or game-watching safaris, support conservation and enhance the well-being of the people. Some of the lodges are built by the Maasai tribe using local materials.

Mehta noted that the industry has been dominated by developers seeking quick returns at the expense of the environment. Cruise ships, for instance, were throwing used cooking oil and wastes into the ocean. “With technology, today’s cruise ships are better built in treating wastes and sewage,” he said.

Still, population density results in high energy consumption. “With 6,000 people on board, it’s like having 30 hotels. I call them the floating ‘Las Vegases’ because people gamble. Some don’t want to leave so the ship itself becomes the destination. They don’t see much of the islands because they leave at 7 a.m. and come back at 5 p.m. You can’t experience much,” said Mehta.

A study on ecotourism in Belize in Central America reported that it drew 800,000 tourists from cruise ships that paid an average of $20 to $30.

In contrast, the 30,000 tourists who stayed on land spent a more significant amount. “The ecotourists spend more money because they stay at the lodgings and stay longer,” said Mehta.

Another example of environmental impact was the Mount Sinai in Egypt where the Ten Commandments was revealed to Moses. During his first trek, Mehta saw the place littered with poop and toilet paper and garbage as there were no toilets and trash cans.

Today, the mount has been cleaned up. The toilets were built with stone to harmonize with the surrounding. Metal waste baskets were concealed by stone wells.

He also warned against green washing, when a company uses eco-friendly strategies to promote itself but it actually operates in a manner that damages the environment.

He pointed out that developers tend to look at potential profits and opt to build accommodations with plenty of rooms, rather than how density can impact the environment.

“Picture the stretch of land. People see money not turtles that come to lay their eggs and how they will be affected,” he said.

“The bigger the number, the more potential damage. The more rooms, the more water, the more electricity and solid waste is generated.   You need land, but it can destroy the native species. It depends on how you build it. If you’ve got 75 rooms spread out on 30 to 50 acres of land, that’s fine, but if there are 75 units on two acres, that’s not an ecolodge.

“Aside from low density, an ecolodge has to provide a spiritual union with nature and culture.”

That’s not to say that Mehta is against progress. “Boracay and Phuket are realities. There is a large population of people with families that dream of vacations but don’t always have the money. You need the Phukets and Boracays. To say forget that you can’t have a cruise ship on Boracay is not going to work. You have to be realistic. We are trying to educate that traditional industry.

“Go and have 300 resorts, but do it in a social way. Make sure the locals benefit, and don’t destroy the environment.”

Waxing philosophical on his mission, Mehta used the imagery of the river. “If you take a drop of water from the river, it is one that flows. At times, it is on the surface and other times it is below. We go up and down as we go through destinations. I look at myself as that drop of water,” he said.

Mehta has designed or led projects on honest-to-goodness ecolodges. The process entails evaluating the sacredness of the site, involvement of the surrounding communities and the local’s knowledge of local construction and experience.

The approach to design begins with one’s immersion in the site using all the senses.

For a proposed resort or tent camp along the Voi River in Coast Province, Kenya, Mehta floated naked on the water. While contemplating in the buff, he felt at one with the water.

“I became the river. It said to me, ‘Look, this is the land of the species. They live here and the locals bring their cattle here. All will be disturbed if you bring tourists.’”

Upon Mehta’s advice, the project was scrapped. “Instead of going for money, I was guided by principles,” he said.

“Developers want to make a profit. They want over 50 rooms even if the site cannot take it.”

When he designed the Lobolo Ecolodge in Lake Turkana, Kenya, Mehta consulted with the locals. Since their cows grazed around the lake, he created a path for them and built gutterless buildings to expedite the flow of rain to them.

The number of rooms was determined by the existing water flow from the spring so that there was enough for humans and for cow grazing.

Through his travels, Mehta has developed a criteria for a genuine ecolodge: design that has a sense of place, conservation and resourcing of water and energy, solid waste management and recycling, eco-friendly sewage treatment and disposal, involvement of the local community in the planning stage and use of sustainable materials and construction technique.

Crosswaters Ecolodge in Guangdong, China, has won awards for using bamboo, the most sustainable construction material.

As project head, Mehta worked with the world’s top bamboo architect Simon Velez from Colombia and feng shui master architect Michael Chang from Hong Kong. The architecture reflects the Chinese history, and is rooted on the local vernacular and the gardens, planted to native species.

“Guests don’t want to go inside their units. Their feedback is that they experience the garden,” he said. The paths also follow the feng shui longevity axis.

Named by National Geographic as one of the top 50 ecolodges in the world, the Laguna Lodge in Guatemala is situated along Lake Atitlán, with its own nature reserve.

“Their property is the last of remaining rainforests and uses solar power. The owners, who are vegetarians, protect it. They help local communities by providing clinics and scholarships. They hire local interpreters to take guests to the rainforest and climb volcanoes,” he says.

Mehta recommends Galapagos Island in Ecuador to be in one’s bucket list. His client, Cerro Verde Ecolodge in Galapagos Island, Ecuador, is surrounded by pristine beaches and animals who commune with humans. The management partners with local establishments.

For his second book on authentic ecolodges, he will include the rustic Miniloc, one of the resorts in El Nido,Palawan.

The resort’s sewage treatment plant guarantees that no raw sewage and grey water are expelled to the sea. The materials recover facility segregates recyclable waste and sends it to a junk dealer for recycling. Organic waste is used as compost for the garden and organic farms.

Aside from its water and energy conservation, the resort is vigilant about its marine and ecosystem preservation which includes reef assessment and environmental education for the staff and guests.