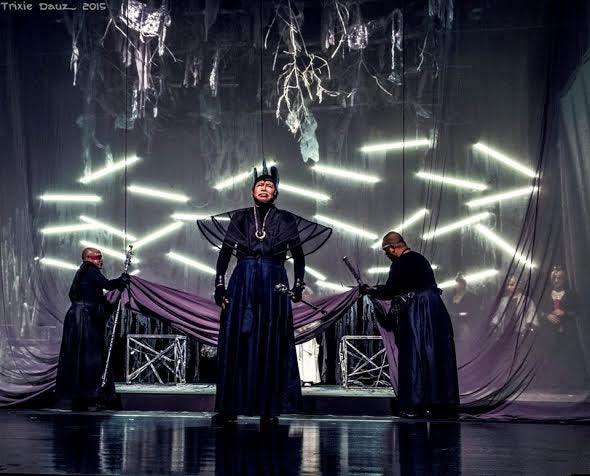 Gino Gonzales created the apocalyptic, withered landscape that emphasized the contrast of good and evil, or, better yet, the innocent and the guilty. PHOTO BY TRIXIE DAUZ

It was unfortunate that acting stalwart Bernardo Bernardo succumbed to illness before  “Haring Lear,” a production of the newly minted theater company Studio Connections International, could complete its run.

The show was cancelled, and theater viewers were deprived of seeing a seasoned thespian, in a tour-de-force performance, incarnate the fall from grace of a stubborn, vainglorious monarch who saw the truth only when it was far too late.

This version of Shakespeare’s “King Lear,” translated by Bienvenido Lumbera and directed by Nonon Padilla, wove the elements of truth and falsehood as undercurrents in its characters’ lives. A sense of foreboding hung like a cloud of gloom from the start, the darkness on the stage and in the auditorium emphasizing the inherent blindness that was a shared flaw among the many players.

Like any other parent who is confident that his children will take care of him, the retiring monarch dispenses the three parts of his kingdom to his three daughters, their portion dependent on how much they can flatter him. Immediately, Shakespeare makes us see that this is a court and a royal family built  on well-entrenched loyalty and sycophancy.

Shunted to the side and banished in anger for telling their  honest truths are the Earl of Kent (Lambert de Jesus) and Lear’s youngest Cordelia (Abner Delina Jr.). Meanwhile, rising to power are Lear’s two older scheming daughters, Goneril and Regan, played to the hilt as mistresses of intrigue and panting bitches in heat by Buddy Caramat and George de Jesus, respectively.

The manipulation is not confined to Lear’s court. Gloucester (Garry Lim), Lear’s friend and a nobleman who in all instances appears to be an upright character, inexplicably condemns his legitimate son and heir Edgardo  (Nico Dans) without trial or a fair hearing. All because of a false report by his bastard Edmundo (Rhenwyn Gabalonzo) who has set his sights on far grander prizes.

Things fall downhill from there. Lear is literally driven away from his kingdom, without money and men, supported only by fellow fugitives Kent and Edgar, who both disguise themselves as a serf and a madman to escape the attack dogs of Goneril and company.

No shades of grey

There were no shades of grey in this production. Gino Gonzales’ apocalyptic stage created a withered landscape and a near-barren backdrop that emphasized the contrast of good and evil, or, better yet, the innocent and the guilty. The royal robes were either a clear black or white.

On a very superficial level, watching “Haring Lear” could be compared to going through a season of “Game of Thrones.” The valiant good are persecuted and meet failure after failure.  Even the attempt of Cordelia, married to the King of France, to rescue her father and restore his throne ends in defeat.

Gloucester, his eyes literally clawed out of their sockets by the evil sisters, is told that his Judas is none other than the bastard he has exalted over his true heir.

Meanwhile, at least until the last act, the greedy Edmundo wins one war after another, capturing Lear and Cordelia in the process. Regan and Goneril, no longer linked by common enemies and a common cause, try to kill each other (and their respective husbands) to get into his pants. All of them eventually implode; Edmundo finally meets his just desserts at Edgardo’s hands, while the evil sisters commit suicide.

The characters that the audience sympathizes with learn their lessons, but at a very harsh price. The fallen aristocrats like Lear and Gloucester come to grips with their humanity and see the truth only after everything had been stripped from them. The mock trial that Lear conducts in the cave could have injected some element of humor if only to lighten things up, but Bernardo and his fellow actors wring every inch of despair and helpless anger out of it.

The reunion of the blind Gloucester and an Edgardo disguised as a fool had its touching moments, but the redemption arising from this scene came at a slow pace. (On the other hand, one could argue that not enough background and time were given for Gloucester and Edgardo to bond prior to their fall.)

The execution of Cordelia, perpetually dressed in virgin white, ends the tragedy on an unforgiving note. Bernardo pulled out all the stops as he carried his daughter’s dead body out of their cell. By this time he stripped his character to the bone, revealing the former thundering sovereign as an old powerless man hounded to the end by his mistakes.

“Haring Lear” started on a heavy note and ended in the same way. Padilla attempted to take the bite out of the more harrowing scenes like the blinding of Gloucester by inserting some off-the-wall numbers like the appearance of a Hulk-like executioner dancing a burlesque. These scenes felt unnecessary and ultimately diluted the more painful scenes of their integrity.

Shakespeare’s material, the compelling performances of the ensemble, and the set’s mood and lighting were enough to drive home the message. There was no need to add, subtract from or embellish it. That includes the biggest head-scratcher of all, the call to sing the national anthem at the end.