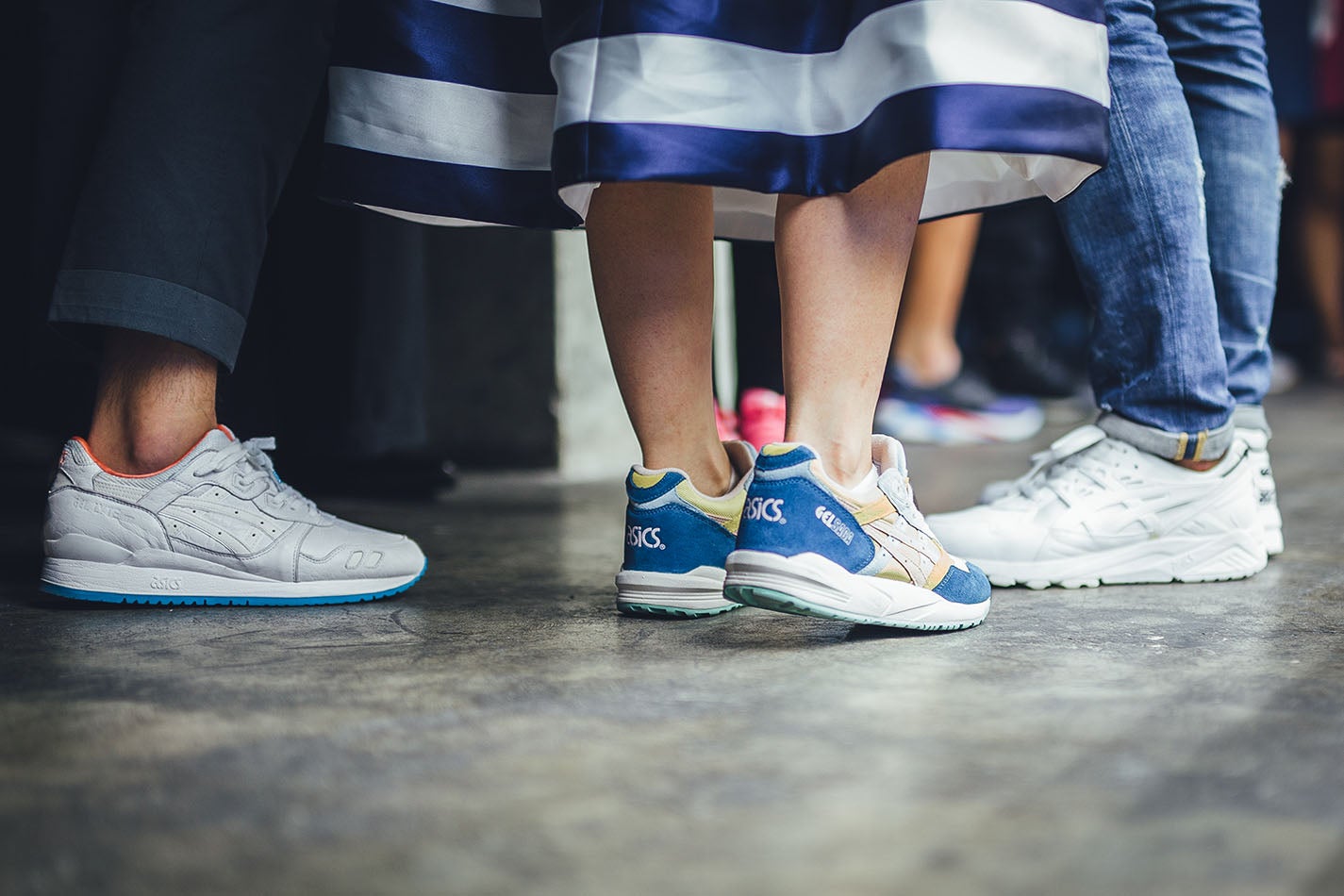 Shoes that ‘symbolize the great power and flexibility of Japan’

ON A QUIET street along Singapore’s Kallang River, an unremarkable, eight-story building was throbbing with the mighty boom of bass music. The structure’s uninspired, quotidian architecture, akin to an abandoned building, belied the club scene at its topmost floor which had been transformed, for one night, into a sneakerhead fantasyland warehouse party.

The invite-only Asian relaunch of Asics Tiger, the Japanese brand that gave street cred to sneakers way before the hip-hop music industry coined the term, was celebrated with free-flowing cocktails, wine and beer at one of Singapore’s hottest speakeasy bars, Kilo Lounge.

The ride up the eighth floor in an industrial-grade elevator, replete with graffiti-strewn walls and with a manual safety gate, was slow but fascinating enough to intrigue the curious guests. The elevator exit on the left side of the club, just across its quasi-whitewashed windows, greeted guests with a vintage-collection exhibit of Asics Tiger, some more than two decades old. The guests included the city-state’s most influential shoe collectors, business associates and partners, and fans.

“The relaunch of Asics Tiger for Southeast Asia offers us new shapes with a lifestyle element attached to it. Our brand will evolve over a period of time and will become very strong in the lifestyle category,” Yogesh Gandhi, Asics general manager, said.

Asics is an acronym for the Latin phrase Anima Sana In Corpore Sano (meaning “sound mind in a sound body”). Under this are three brands: the Japanese heritage lifestyle segment Onitsuka Tiger with a distinct European-luxury look, established in 1949; Asics, the sports performance brand that is the choice of many elite athletes around the world, established in 1977; and Asics Tiger, the sports lifestyle brand that combines Japanese sports technology with global street style.

“Asics Tiger is the lifestyle expression of our performance brand. It’s not only vintage, but it also represents the new styles of the future. Our logo symbolizes the great power and flexibility of Japan,” Gandhi said.

Asics Tiger has been busy bringing back its modern take on some classic models over the past few years. This year, in celebration of the 25th anniversary of the Asics Tiger Gel-Lyte III, Gandhi said the style will be coming out with design collaborations from top sneaker designers.

A 25-year-old Gel-Lyte III, famous for its split tongue, was among those on exhibit from the collection of Singaporean Rashid Rahman. Rahman, who has been collecting sneakers since he was 17 years old, said the Zillion x Asics Gel-Lyte III was among his favorites.

The clean color palette of the Zillion x Asics Gel-Lyte III is designed by David Guarino of the Japanese shoelace brand Zillion. Its laces are made of beige suede and ivory mesh, and the shoes from the traditional Japanese kimono fabric. Rahman’s pair comes with the original wooden tags.

Also on display was his Patta x Asics Gelsaga that he acquired for 350 euros, designed with trademark Amsterdam colors of red, black and white, with embroidered St. Andrew crosses on the tongue. It is made of pony hair, rubberized leather and perforated suede.

The high-grade nubuck, leather and pigskin of the navy blue upper of the limited-edition Ronnie Fieg x Asics Gel-Lyte III Salmon Toe is, however, his most coveted Asics Tiger collection. Only 40 signed boxes were released of this model.

“I collect Asics because I like the brand, even before it became well-known around the world,” said Rahman.

His sneaker collection—about 300 overall, half of it Asics Tiger—is pampered inside an air-conditioned storage room, with dehumidifier and loads of silica gel packs. He “airs” his sneakers once in a while, keeps them out of direct sunlight and stores them in boxes stacked on shelves.

Kenji Oh, Asics marketing manager for Southeast Asia, said the Asian market, especially in fashion-forward countries like Japan and South Korea, can be quite challenging to please. But Asics Tiger, with its line of collaborations with like-minded artists, has consistently come out with designs and materials that have been hits in the market.

“The design sensibilities of Asia have always been at the forefront of our brand. I believe we imbibe a distinct fashionable lifestyle that is quite different from our European friends. Sometimes we combine designs peculiar to a country’s traditional colors. Asics Tiger infuses these design styles into our shoes so that they’re neither Asian nor European nor American, and so they have a broader appeal,” he said.

The new Asics Tiger has been recreated using the same original materials and colors. The global street-fashion line is a new addition, but its models remain true to the vintage form. Gandhi said they will be bringing in new models each month.

“We won’t restrict our product elements to old products. A new collection with collaboration from top artists will be launching soon, to ensure that we have a strong product portfolio and that we stay ahead of the competition,” Gandhi said.

The basic running shoe introduced in 1993, Gel-Lyte V, that featured a monosock construction with leather upper and a highly elastic tongue, now has a number of design variations available, including nylon and suede models. The distinct split tongue of the Gel-Lyte III, originally designed laterally to keep it steady during movement, introduced new collaboration models developed and constructed in Japan, and will also have a limited edition each month of 2015.

Asics Tiger may have added a lifestyle element into its design, but all the models are still designed to perform accordingly should the demand arise. That means shoes that go from the gym to the streets and way into the night during weekend club-hopping.

There were no purchases allowed during the relaunch night, but the sneakerheads were busy jotting down models of shoes they planned to order. Limited editions tend to disappear from the racks minutes after they go on sale.