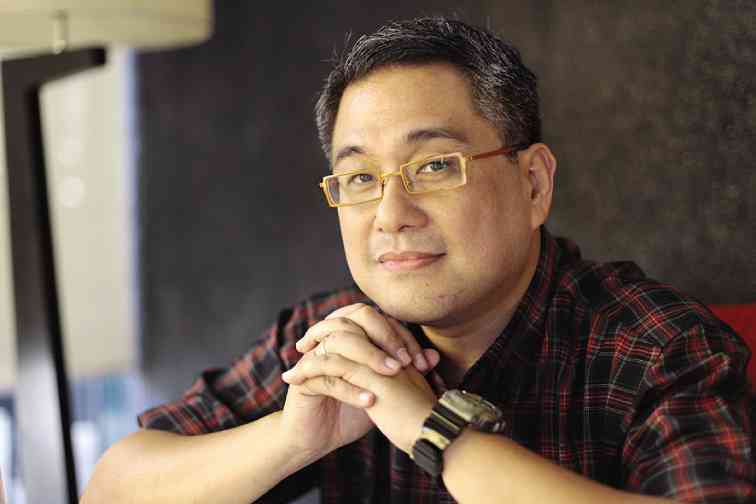 HIZON: “I am not a celebrity. I’m a journalist.” JILSON SECKLER TIU

Over lunch with BBC anchor Rico Hizon after the holidays, one thing struck me—this news celebrity isn’t a slave to social media. And that is a rare find, in this time of media celebs who post everything they do because they’re expected to build their following, just like any celebrity.

Although he has thousands of friends in Facebook and thousands of followers in Instagram and Twitter, he says he’s not really “crazy about posting on social media.”

“I am not a celebrity. I’m a journalist,” he tells us. “If people want to follow me, thanks. If not, well…

“What’s important is the substance of what I do… would I like the world to know what I’m eating for breakfast, etc.? …I’d like to keep my life private, and keep that distance between me and the public.”

That “public” is an audience of more than 300 million worldwide. Hizon, the only Filipino news anchor with a reach this big, was recently awarded  Best News Presenter/Anchor at the Asian TV Awards in Singapore. He does the country proud, and apparently the success and accolades have not gone to his head. He hasn’t lost sight of his basic role in life, which is to be a journalist.

On mornings when I tune in to BBC and see him on TV, what strikes me, always, is the enthusiasm, indeed the passion, he shows for the news. I knew that one day I’d be able to sit down with him and ask him, how come he doesn’t seem to get bored, ever, with what he’s doing day in and day out?

I finally got to ask him at this lunch. “It’s a different story every day. We live in a very dynamic world, whether in business or politics. You have to be interested in the news, know it inside out.”

What not many people know is that Hizon started his journalism career about two decades ago covering entertainment, and from there, did sports, the hard news and business for local networks. Such a wholistic background opened up his interests beyond the stock market and the business stories that he reports on daily.

Here is one award-winning journalist who doesn’t look down on lifestyle coverage, even as he pursues the hard news. I found him cool as early as the early 2000s, when he helped us work on the BenCab coffee-table book by organizing the book launch/exhibit in Singapore where he was and is still based.

As the art circle knows, Hizon is an avid collector of paintings of BenCab and has become a good friend of the National Artist. It all started early in Hizon’s career, when he covered the art exhibit at Luz Gallery.

“When I entered the door, this painting spoke to me,” he recalled the moment that got him hooked on collecting the works of BenCab and other contemporary artists such as Mark Justiniani, John Santos and Elmer Borlongan.

“Now, when I come home, I walk through that door [and see the paintings] and my day is fulfilled.”

Hizon is quick to clarify, however, that his collection of contemporary artists isn’t massive or extravagant compared to those of big-time collectors. “Whatever we acquire, my wife (Melanie, a former flight attendant), has to agree 100 percent.”

He notes how today’s visual arts scene is vibrant but a bit commercial for regular art-lovers like him.

I found it interesting that his love of news began when, as a child, he would watch the news because his mother (he’s the youngest of four) was always watching the news. That interest developed into a professional commitment.

A broadcast journalist like Hizon, who has remained ethical while passionate about the news, is rare today, when a few broadcasters have turned into attack dogs of vested political interests, who manipulate their mass audiences to their desired ends—broadcasters who have a set of deliverables to their “trapo” bosses.

It’s also noteworthy how Hizon hasn’t turned himself into an out-and-out celebrity, again in an era that demands celebrityhood out of journalists. At least he knows how to draw the line between the need to keep and expand one’s audience and just to pander to it.

Speaking of mass, Hizon—and this I also found interesting—is into teleserye, again another habit he developed growing up, seeing his mother watch teleserye.

After a hard day’s work in the newsroom—he plans his stories and coverages and researches on his content—he comes home to watch his favorite teleserye, “Forevermore,” starring Kim Chiu and Xian Lim. He says, not only does he love it; that’s also how he keeps connected to Manila, from his base in Singapore.

Finding out these things about Hizon, I am now able to put the character into the face of the BBC News I see in the morning.

Although I don’t really hang out with this group, it’s always a lovely experience to join the “original” ladies who lunch—Imelda Cojuangco, Nene Leonor and friends.

I say “original,” because these were the women who brought glamour into leisure, particularly in the previous decades when lunch could still be had at leisure.

These women would spend a good deal of time prettying themselves up—and their homes (with more than ample help, of course)—to entertain friends. That was during their downtime. Their real time was spent pampering their husbands and raising their kids.

Now their kids aren’t only grown up; chances are, they’re titans of business and industry or leaders in their fields.

Mrs. Leonor organized the luncheon at Makati Shangri-La’s Shang Palace not only to celebrate her birthday, but also to take advantage of the rare occasion that Mrs. Cojuangco could venture out of the house. I saw it as my perfect chance to be with this high society icon and patron of the arts and Church, whom I have come to admire.

I was happy to sit beside Mrs. Cojuangco and discover that she was in fine health, in high spirits and of keen mind. Still as demure as ever—although she’s a steely woman who can run house, family and her charitable/religious causes—she told me how blessed she felt to be alive and well. She survived multiple aneurysms, a miracle that people attributed to her piousness and unflinching faith.

Perhaps a measure of how she remains one of Manila’s style icons, and one of its most enigmatic women, was how, in a benefit vintage bazaar last year, her formal clothes, which she donated, sold out. A former fashion designer bought them all (they weren’t that many), and perhaps will put them up on exhibit in the near future.

She gave me an update on her family, even her grandchildren. What we found striking was how she’s kept abreast of what was going on in society, indeed, in the country.

She said she loved to watch cable TV, and had her favorite drama series.

To be ageless, one has to stay tuned, and smile while one is at it. That’s the “Meldy Co” way.

At another lunch, this time, with ladies who hardly have time to lunch, a woman in her 40s said something that left us chuckling. She said that every time she felt down and at her wits’ end, heavy with burden, she’d think of the President and his burdens, and in an instant she’d feel better.

Why, we asked. “I realize I’m not the only one getting the raw end of the deal. I imagine how much worse stuff he has to cope with—alone, and with no rewards in sight,” she said.

And this friend with a rather inordinate insight added, “I call it my P-Noy therapy.”

What a pre-Lenten thought.