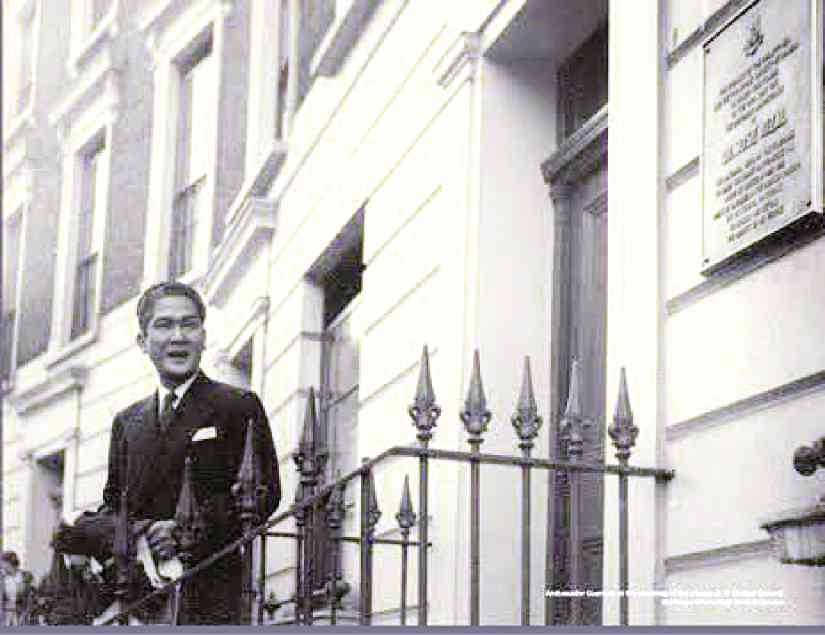 GUERRERO was ambassador to the Court of St. James.

This year marks the birth centenary of the late diplomat and intellectual, perhaps best known for authoring the famous Rizal bio, ‘The First Filipino’

There are many stories told about the late Ambassador Leon Ma. Guerrero III (1915-1982), writer, novelist, thinker and diplomat whose service in the government spanned 40 years.

The most popular, according to Manila Bulletin columnist Beth Day Romulo, was that during martial law, Guerrero would surrender his fountain pen to guards at entrances of government buildings because it was his “weapon.”

His sister—author, historian and Malaya columnist Carmen Guerrero Nakpil—quoted him saying, “All it takes to succeed in government service is complete honesty and yes, some patriotism and a little intelligence.”

When Guerrero lay dying at the Lung Center in 1982, Nakpil said President Ferdinand Marcos sent word asking the recently retired ambassador whether he wanted a considerable pension or a government contract for his books.

All her brother wanted, Nakpil said, was the Mabini medal named after Apolinario Mabini, foreign minister of the First Philippine Republic.

Guerrero, his sister added, “never looked happier than the day Marcos came to his deathbed and pinned the medal on his chest. He said he accepted it in the name of all the many other public servants who were like him.”

Most locals know Guerrero as the writer of “The First Filipino,” the biography of José Rizal that won grand prize at the Rizal Centennial Biography Contest held in 1961.

Students most likely encountered his translations of Rizal’s “Noli Me Tangere” and “El Filibusterismo” in school.

Fondly called “Leoni” by close friends and kin, he was reputedly the highest-paid prewar journalist while writing for the Philippines Free Press, where he often skewered upper-crust Manila.

Guerrero volunteered to fight the Japanese during World War II. After the war, Guerrero courted national attention when as assistant solicitor general, he locked horns with Marcos during the controversial Nalundasan case, where the future president was indicted for the death of his father’s political opponent.

But Guerrero’s star shone brightest when he entered the diplomatic corps beginning 1954, serving as the country’s premier envoy to Great Britain and Northern Ireland.

His earlier tussle with Marcos did not discourage the president from recognizing Guerrero’s capabilities, especially in foreign affairs.

Guerrero made headlines in 1968 when as the country’s ambassador to India, he made an appearance in bilateral talks with Sabah and alleged that British “backroom boys” were aiding the Malaysian panel.

He asserted before Indian media that the Philippine claim “rests on solid documentary evidence in the archives of the United Kingdom, Spain and other countries.”

He also questioned Malaysia’s refusal to “submit the issue to the International Court of Justice” for a resolution.

Despite his death more than 30 years ago, the dot.com generation will be offered a glimpse into Guerrero’s treasure trove

of quotes, insights and wit through “History in 100 Tweets,” an exhibit celebrating his 100th birthday at the Filipinas Heritage Library using the Twitter format beginning March 24, LMG’s actual birthday.

“This exhibit imagines how he may have tried to reach today’s generation. And distills some of his writing into the 140-character platform we have become so familiar with,” Guerrero’s son David told Inquirer Lifestyle via e-mail.

David, head of the BBDO Guerrero advertising agency, said the exhibit “aims to provide visitors with the chance to discover, share and discuss the topics raised” by his father in the Twitter messages.

“This was in part because he wrote the translations of ‘Noli’ and ‘Fili’ ‘for the modern reader.’ So it got me thinking what today’s modern reader would be looking for. And since we are more time-starved, technology-obsessed and have shorter attention spans than before, the idea of distilling things down to 140 characters was appealing,” he explained.

David added it was his idea sifting through his father’s works and coming up with the tweets.

“While I made the first selection of tweets, I shared them with a few other trusted people to get their feedback. Thanks to them, we were able to compile what seems like a reasonable list! However, I’m sure the list might change as time passes,” he noted.

Since Twitter messages are short, he pointed out that “so much of the context is lost.”

“The tweets leave a lot of context unsaid,” said David. “So we are providing links in the exhibit, for people to go online with their phones and read more. Of course, they may even be tempted to read some of (my father’s) books. Which seems like a good outcome.”

Asked how Guerrero would react to current events, the son said: “I’m sure he would always be on the side of the Philippines and Filipinos, although he would not be uncritical of current events.”

“Perhaps that’s why it’s interesting to look at his view on the past,” he said. “We can judge more objectively. And maybe allow ourselves to consider how much has changed. Or if things have really changed at all.”