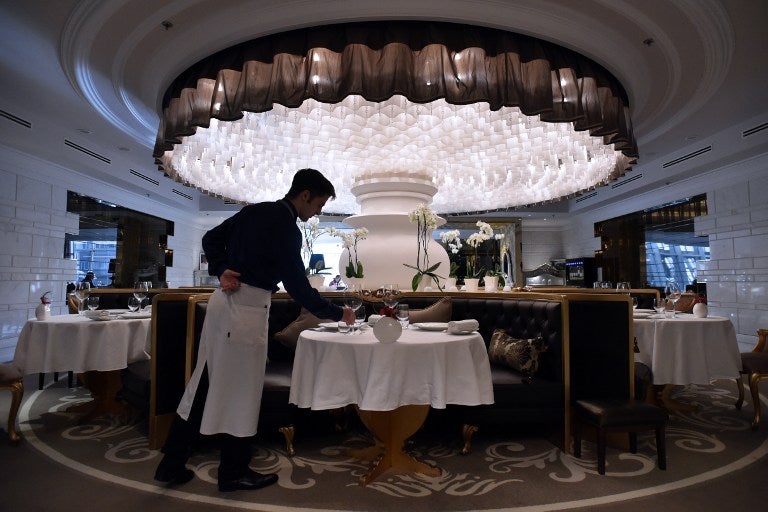 MOSCOW–Michelin-starred French chef Pierre Gagnaire is to close his restaurant in a Moscow luxury hotel, a spokeswoman said Monday, with Russian media blaming the economic crisis and the embargo on many Western foods for the decision.

“After five years of fruitful cooperation with Pierre Gagnaire, Les Menus restaurant is closing because of the agreement running out at the end of March,” a spokeswoman for Lotte Hotel, which houses the restaurant, said.

Business daily Vedomosti suggested the reason for the closure was the difficulty in obtaining many Western food products due to the embargo imposed by Russia in retaliation for Western sanctions over the conflict in Ukraine.

The report also said the economic crisis, which has seen inflation soar as the ruble plunged in value was to blame–most luxury foods have to be imported to Russia.

Alexei Zimin, the editor of Afisha-Yeda food magazine, told Vedomosti that haute cuisine failed to see growth in Moscow even during the years of economic stability.

“Now when business activity is falling, the demand is shrinking all the more,” he said.

Gagnaire, one of France’s superstar chiefs, is known for his innovative molecular cuisine. His Paris restaurant gained three Michelin stars in 1998 and has retained them ever since. He has 11 restaurants in cities across the world from Dubai to Las Vegas.

He is among a number of top chefs to have opened restaurants in Russia during the years of economic prosperity fueled by high oil prices.

French chef Helene Darroze, whose restaurant “Helen Darroze” in Paris has gained one Michelin star and whose London restaurant in the prestigious Connaught Hotel has two stars, opened a Moscow restaurant in 2012.

Numerous attempts to transplant Michelin-starred chefs to Moscow have ended in failure in recent years, however.

Jeroboam restaurant, which opened in the Ritz Carlton hotel under German chef Heinz Winkler closed in 2009. Koumir restaurant, a franchise of the Maison Troisgros restaurant in Roanne, central France, launched in 2006 but closed its doors after a year.

The current economic crisis in Russia has led to rampant inflation, particularly of food prices, amid falling spending power.

It has already led to the closure of hundreds of restaurants in Moscow and fueled a trend for restaurants using high-quality fresh local produce.