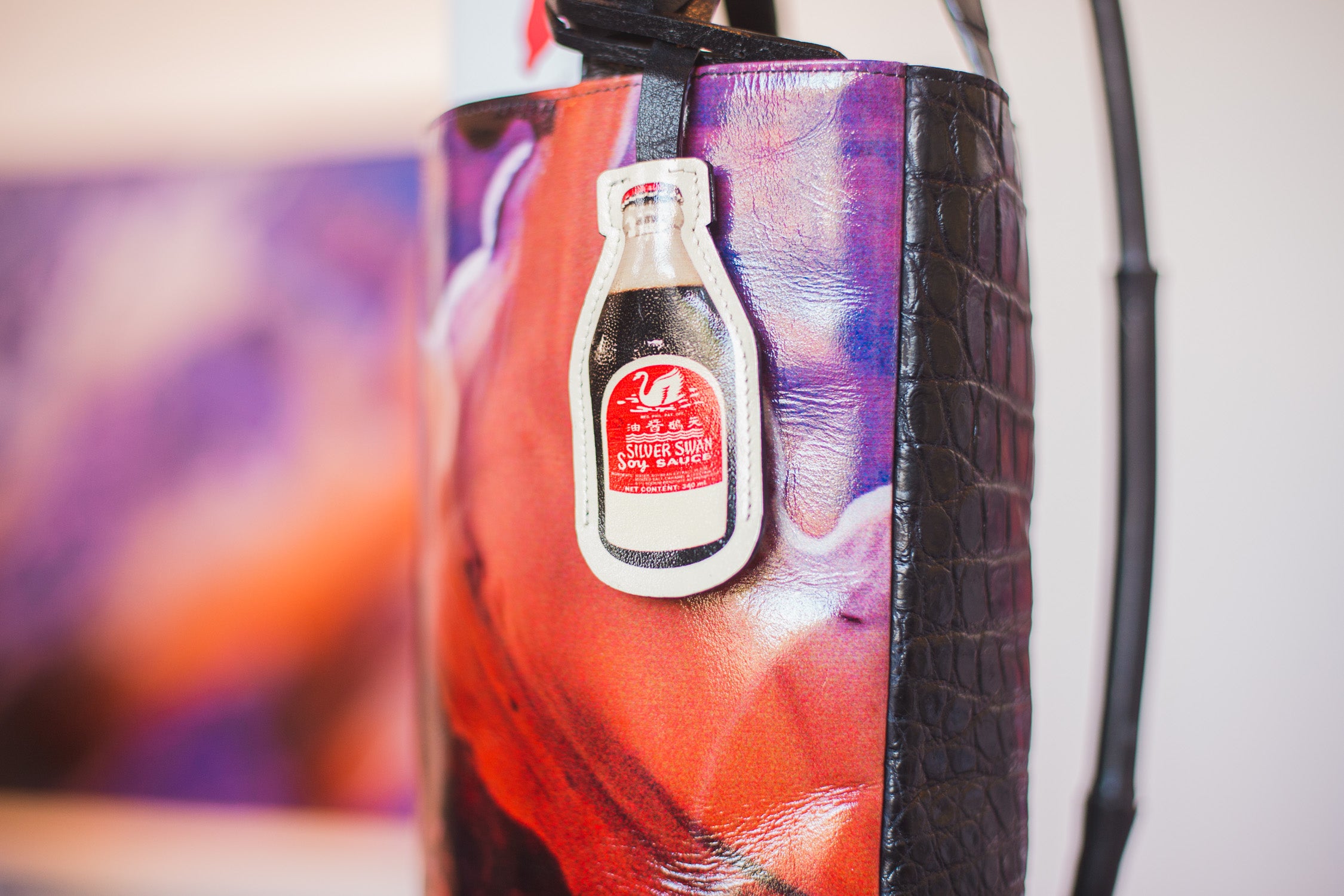 JUST a dash of kitsch turns this Celestina bag into a show-stopping fashion statement.

There are bags that speak of luxury. How about luxurious bags that tell a story?

Celestina, the global Filipino brand, has whipped up four designs for a genuine crocodile tote bag, patterned after the lowly bayong, that mixes food, yearning and the Filipino diaspora.

The front of each design features a dreamlike shot of clouds superimposed with a hazy impression of the drippings of a specific condiment. The images are abstract but also calming. Photographer Jay Yao said it was “kinda ironic” that the “skyscapes” or cloud photographs he took while on a plane years ago that were “appropriated and manually manipulated” by visual-arts company B+C using Nutri-Asia condiments had this effect.

In lieu of logo-embossed bag tags, the handles are accessorized with pictures of local condiments like soy sauce, vinegar, banana ketchup and lechon sarsa.

These bag tags, a brainchild of model-designer Tina Maristela Ocampo, add wit and surprise. It is not every day that one sees a miniature bottle of toyo hanging on the handle base of an expensive crocodile bag.

Ocampo said it was husband Ricco who brought the spark to the whole project. Some time ago, Celestina’s shop in Greenbelt 5 had an art installation using hundreds of cans of a leading local beer brand.

Why clouds on the background? Yao used to stay in Vancouver, a city that hosts a significant population of overseas Filipino workers (OFWs). Clouds are the main attraction when one looks out of the plane that takes an OFW away from the family back home.

Tapped by Celestina for the project, Yao immediately connected clouds and condiments to the toiling fellows he met abroad.

“They eventually find roots abroad and send back home about 90 percent of their salaries,” he pointed out.

Pinoy sawsawan have already found their way to these overseas workers’ kitchen tables.

Ocampo credits Damien Anne and Baby Imperial, the couple behind B+C, as the geniuses that merged Yao’s photographs with the sauces to create interesting art.

“We painted and photographed at the same time because all the ink would be spreading on the paper, so it’s kind of like a moment,” Yao said.

The photographer would pour vinegar, for example, and watch how it would react with the surface. “What you see [in the bag design] is the final [image]. These are all documentations, we did not Photoshop,” he stressed.

Ocampo said the initial batch of red-themed bags that featured UFC ketchup was quickly snapped up during the last Art Fair Philippines gig at The Link in Ayala Center in Makati City.

Ocampo and Teach for the Philippines (TFTP) cofounder Lizzie Zobel gamely posed with the Silver Swan and Mang Tomas bags on exhibit at the Celestina store Tuesday.

Ocampo said Celestina has chosen TFTP, modeled after the Teach for America effort in the United States, to receive 20 percent of the proceeds of its Memory Stains bags.

“This started three years ago, and our intention is to go nationwide. We are working in urban and suburban municipalities [in Metro Manila]. We go out and identify talented young men and women who are willing to give two years of their lives to teach public-school children and help us close the gap in teacher resource,” Zobel said.

She pointed out that one specific objective is to help close the gap created by the new K+12 program of the Department of Education.

“We find teachers for K+12. Some municipalities want to have teachers to fill [vacant] positions, and we help them,” Zobel added.

“Our biggest partner is the Department of Education. We were asked to help in K+12,” Delgado said.

“Education is one way of lifting people out of poverty. TFTP is great in raising the education level of people, to create more [members of the] middle class, which is what the Philippines needs,” he said.