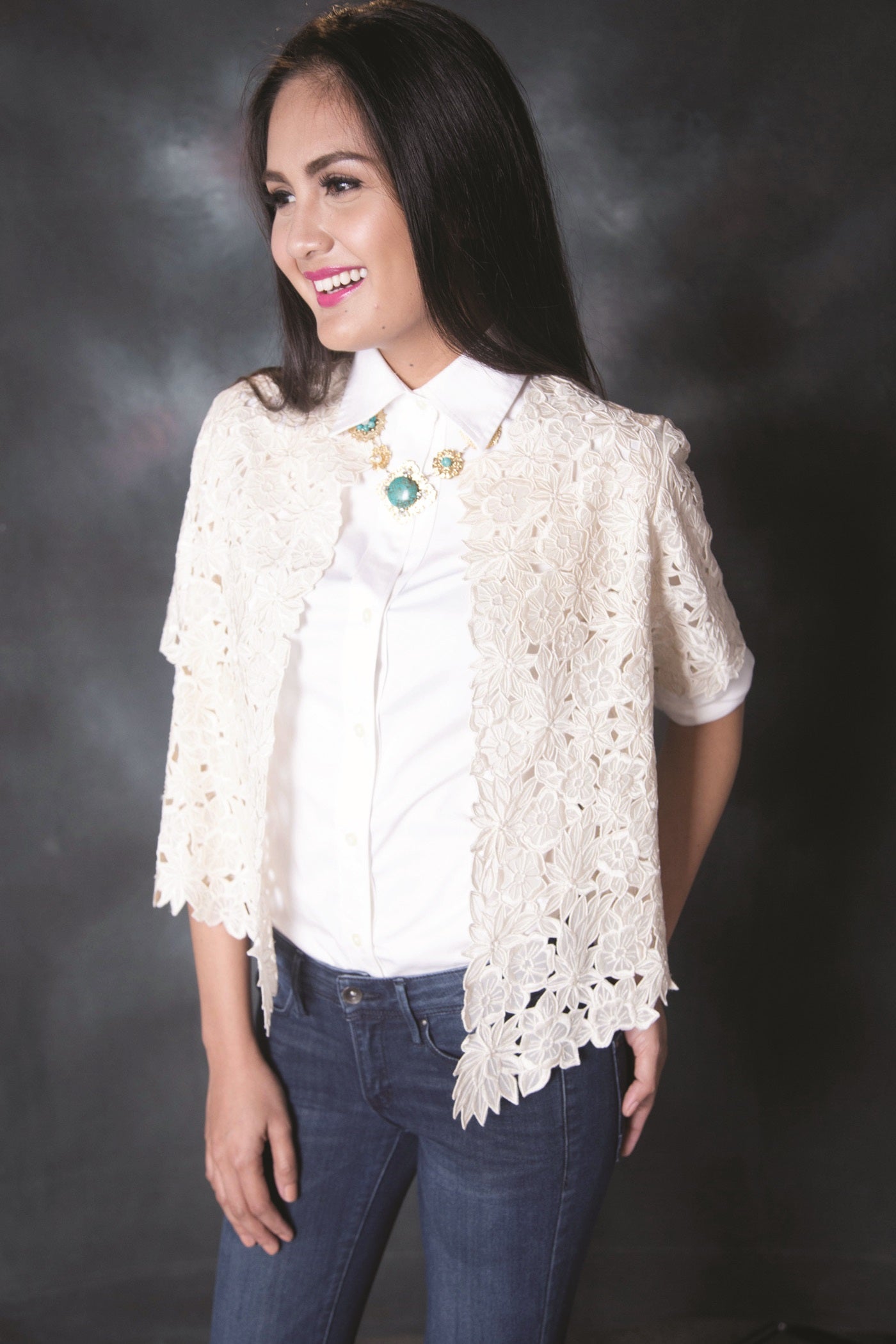 When Tesoro’s Philippine Handicrafts marked the birth centennial of its founder, Salud Tesoro, members of Manila’s café society went to the celebration in their Filipiniana finery.

While the famous store itself is turning 70 this year, the second-generation Tesoro is producing items that appeal more to a younger market.

Maria Isabel Tesoro, CEO and the youngest of Doña Salud’s nine children, wore a shift wrapped with a jusi-piña shoulder kerchief. She explained that she modernized the traditional alampay, or shawl, with a streamlined cut. It could be draped on a basic dress to make it formal for an after-office party. Still, the shawl maintains the traditional embroidered lace with cutouts and filled needlework.

Moreover, it can be paired with a kamagong wrist bag or minaudières made of water snakeskin or sinamay with hand-beaded clasps.

Her mother started the business in 1945 as Sally’s Gift Shop in the old Manila business hub of Escolta. Her father, Nestor, worked at the back of the house handling the finances, while Salud dealt with the clients.

The store was renamed Tesoro’s when it adapted the one-stop-shop concept of handicrafts, clothes and food items made by artisans from all over the Philippines.

“Mom was intuitive. She always thought of what the market wanted,” Maria Isabel recounted.

Evelyn Lim-Forbes recalled that her father P.L. Lim sold laces to Salud before he became an industrialist: “She understood the vision—to continue to sell the best of what the Filipinos made.”

American missionary Donna Lyons, who has been living in the Philippines since 1965, was a regular customer in all the Tesoro’s branches. The expat remembered Salud standing behind the cash register, educating customers on the tradition behind the store’s items.

“She sat patiently, explaining about the culture,” said Donna. “She taught me how callado and the hats were made. I learned to tell the different kinds of wood just by looking. My house is filled with Filipino products that it looks like the store. When I host dinner, I use native tableware. I have a house in the States, and it’s filled with Filipiniana. The best way to promote the country is to get the foreigners to enjoy the local crafts.”

This year, Tesoro’s relaunched its Makati store with a new building façade, adorned with embroidery patterns on the skin and capiz shell balls on the canopy. It also introduced Tommy’s Café, a coffee shop where customers can enjoy local brews with pastries.

Aside from running the family business, Maria Isabel is in charge of product development. One of the innovations is to incorporate traditional fabric designs such as the pis from Cotabato, the insukit from Abra and the inabel from Ilocos in canvas totes, mugs, tumblers, pencil cases and liquor shot glasses.

The pricier items for corporate gifts are made of golden capiz and coconut shells.

Portraits of Filipino families are hand-painted on coconut husks and certified for authenticity.

French glassware is given special effects with raffia.

Anodized copper wires are entwined on capiz napkin holders with Art Deco patterns, reminiscent of the architecture of prewar Escolta.

Since many of its clients play bridge, the store developed wood and capiz laminate containers.

“All our items are sustainable,” said Maria Isabel. “We don’t have large carvings of endangered wood, and our shells are not on the list of the Convention on International Trade in Endangered Species,” she said while looking at the display of a tridacna, a giant clam shell done in resin.

There will always be the classic merchandise, products that have been driving sales since 1945, such as the kamagong salt and pepper holders, wooden salad bowls and platters, and the mother-of-pearl spoons.

Capiz takes on many forms. “Our capiz placements are sturdier than what is on the market,” said Maria Isabel. Capiz chargers can be customized to match the owner’s plates.

The capiz coaster with paintings of local orchids and flowers can be bought as a single item. “We used to sell them by six per set but people don’t get married anymore,” she said.

The store has always been known to cater to formal events, for people of all ages. Embroidered christening gowns come in all price points, from the affordable cotton to the elegant piña. The children’s wear specializes in bold-colored gowns with patterns inspired by fairy tales for the girls and a range of barong for the young boys. The barong styles for the adults can be as official as a uniform for the bodyguard and as fashionable for the bridegroom.

“You can have any color of jusi, piña, jusi-piña blend or jusi-cotton, and our sewing department can make it for you,” said Maria Isabel.

For something hip, the traditional fabrics are made into contemporary apparel. The inaul, a Maguindanao fabric, is shaped into a fitted jacket and has been enjoying brisk sales from young women.

The South Sea-pearl necklaces are genuinely sourced from Muslims. “We don’t carry freshwater pearls. They are not cultivated here,” she said.

She also pointed out that the delicatessen items such as herbal teas, tablea, mango otap, mango bars, crispy squid and ginger cookies are all approved by the Food and Drug Administration. The boxes are marked with dates of manufacturing and expiration.

Then there’s a book section which, despite its modest size, is more extensive than a bookstore’s. It covers a variety of subjects and authors. It even has rare books.

On the store’s longevity, Maria Isabel explained: “Tesoro’s has endured because it gets the best, gives the fairest price and provides excellent service. Filipinos have been our main market. I’ve never seen such a level of interest from young people who have more awareness what it means to be Filipino. In this age of globalization where there is uniformity, these artisan products make us unique. We are more than a store. We are an experience. You come here to appreciate Filipino legacy.”