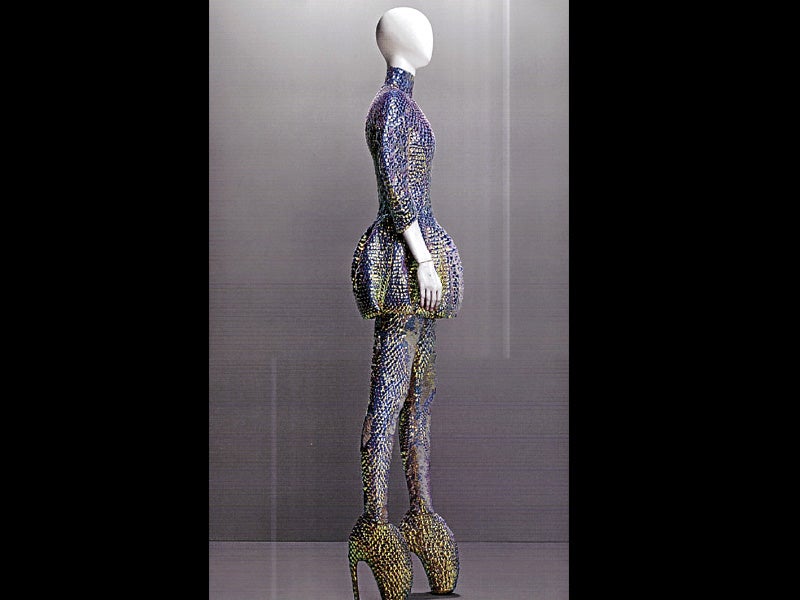 New book on Alexander McQueen is portrait of manic genius

If, like us, there’s no plane ticket in your name bound for New York before July 31, which is when the “Alexander McQueen: Savage Beauty” exhibit at the Metropolitan Museum of New York closes, some consolation can be found in the eponymous accompanying catalog by Andrew Bolton, curator of The Costume Institute at the Met.

Burton, who famously designed the wedding dress of Catherine Middleton when she wed Prince William last month, provides a rare, intimate account of her mentor’s thought and creative process, the man dubbed as London fashion’s enfant terrible – he who defied The Establishment, creating garments that broke conventions and provoked questions, clothes that were not only magnificent to behold but were social and political commentaries, as well – but whose genius tragically ended too soon.

Fashion mourned the loss of McQueen, who committed suicide just over a week after his mother’s own death in February last year. He was only 40.

Born Lee Alexander McQueen on March 17, 1969, in Lewisham, London, to a cab driver and a genealogist, he had said in an interview that, even as a young boy, he knew he would “be something in fashion.” He dropped out of school in 1985 and sought apprenticeship on Savile Row, where he mastered the craft of bespoke men’s tailoring. The techniques of haute couture, the softness of his later works, he credited to his stint at Givenchy, where he took over after John Galliano moved to Dior.

“I don’t think you can become a good designer, or a great designer… To me, you are just one. To know about color, proportion, shape, cut, balance, is part of a gene,” McQueen said, responding to the image that, according to him, the media had created of his provenance and success. “At the end of the day you’re a good designer or not and it doesn’t matter where you come from.”

At the age of 20, he traveled to Milan to seek placement at Romeo Gigli, a famous designer at the time. The young Brit was fascinated with the media attention generated by the Italian designer. “It had very little to do with the clothes and more to do of him as a person… You need to know that you’re a good designer as well, though… If you can’t design, what’s the point of generating all the hype in the first place?”

He later taught pattern-cutting at Central Saint Martins, where he was convinced to enroll in the masters program. His graduation collection was famously bought by the stylist Isabella Blow, who would become his muse. (Blow, like her friend, committed suicide in 2007.) 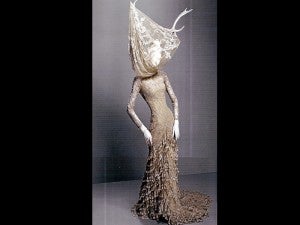 For McQueen, it was all about the clothes. He was about provoking emotional response. A collection began with how he pictured the clothes would appear in the show. In that way, he was a performance artist, staging some of the most extravagant fashion shows. (Perhaps, to some measure, the images in the book stir as much emotion.)

“Highland Rape,” his Fall-Winter 1995-’96 collection, was among his seminal works, and one of the most controversial, referencing the Scottish Highland’s massacre by the British. It was a tribute to his Scottish heritage.

No stranger to controversy

McQueen was no stranger to controversy. The press continuously recounts, to this day, his claim that he had scrawled obscenities in the lining of a jacket intended for Prince Charles while he was working on Savile Row. The tailor, Anderson &amp; Sheppard, recalled all the pieces they had made for the royal, only to find nothing.

But his antics were no more confounding as his designs. He famously created the “bumster” skirt and trousers, cut so low at the back to reveal the cleavage of the bum. He said it was intended to elongate the female torso.

McQueen designed to “empower” women. “…There’s a certain hardness to the clothes that makes her powerful. It kind of fends people off… It’s almost like putting armor on a woman,” he said. Burton says he was all about the waist.

“Lee loved strong women,” says Burton. “The minute I started standing up and expressing my own opinion, he respected me more.” 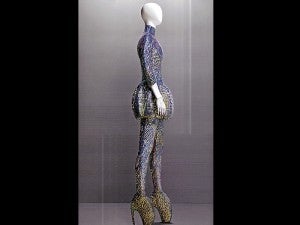 He was inspired by anything, she adds, collecting bits and ends to create a dress – clam shells, beach mats, a pack of cards – but he never bought a vintage piece to use as reference.

For “Plato’s Atlantis” (which had the famous “Armadillo” shoes), McQueen had told Burton, “I don’t want to look at any shapes. I don’t want to reference anything… I want it all to be new.” He did just that.

“I spent a long time learning how to construct clothes, which is important to do before you can deconstruct them,” he once said. “You’ve got to know the rules to break them. That’s what I’m here for, to demolish the rules but to keep the tradition.”

It’s hard to wrap one’s head around McQueen’s creative process, as Burton describes it. You picture the manic intensity of a genius – ”I don’t remember him sitting still that much,” Burton recalls – draping, cutting fabrics 3D, producing an exquisite garment before your eyes, and just as quickly he would take it apart and start all over.

“He rarely changed whole collections, but a collection would evolve alongside his imagination,” Burton says. “Sometimes the deadlines were so tight… [But] he knew that in the fitting he was completely capable of making a whole collection out of nothing.”

On mimicking her mentor’s process, she adds: “I tried to do it recently, and I thought, ‘Oh no, I’ve cut the wrong bit off.’”

And it is, perhaps, this McQueen singularity, his kind of creative instinct, that spectators of fashion will never see again.