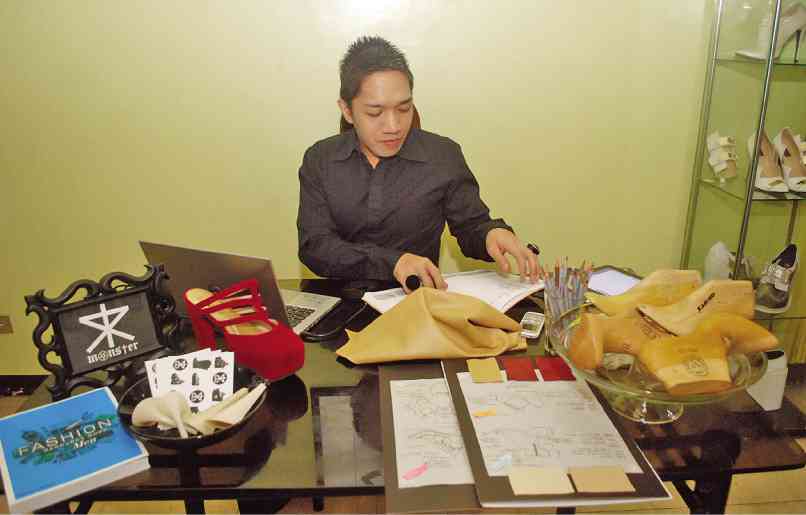 SHOE designer Ron Ramiro has his gadgets within reach when designing a new collection and uploading photos on Instagram. PHOTOS BY ARNOLD ALMACEN

From family living room to design area and shoe showcase

Like most millennials, shoe designer Ron Ramiro is wired to the Internet. Ever since he opened his shoe business in 2012, this former call center agent considers his laptop, smartphone and iPad as indispensable tools of the trade.

“My smartphone and tablet allow me to instantly upload stuff on Instagram,” he says. “My following on Instagram isn’t really huge, but it’s huge enough to hook me up with fans and international buyers.”

While he and his partner Yen Salamoding sell directly to local clients, Ramiro has firmed up a number of partnerships with resellers abroad. Online shoe distributors like solestruck.com have been carrying his shoes since he started out three years ago.

“I’m now attending to their third purchase order,” he says. “And when they order, they really order in bulk, sometimes more than 100 pairs.”

It took him a while to realize that despite the reach, convenience and freedom of movement the digital age offers, he still needed a reputable and accessible business address to personally entertain certain clients and show his range as a designer.

Soon after he diversified late last year by adding Ramiro, a more formal and upscale brand, to his avant-garde maiden venture dubbed Monster, the shoe designer decided to turn the family’s living room in Parañaque into a showroom and work area.

“I didn’t have to knock down walls to convert the place,” he says. “It simply involved planning, putting certain things away and rearranging.”

Vying for space on his medium-size worktable are Ramiro’s gadgets and more traditional tools of the trade such as pencils, drawing pads, mood boards, leather swatches and several

Ramiro also converted his father’s unused bar, which sits in one corner of the living room, into a showcase for his edgier and bulkier pieces grouped under the Monster label.

Since the Ramiro line is barely four months old, he decided to initially invest in a pair of vertical glass showcases to feature his luxury collection.

That would do for now, Ramiro says, since he’s still in the process of establishing his collection for a more upscale market. But judging from the public’s initial response, Ramiro, the brand, seems to be exceeding the designer’s expectations.

“There was really a need for separate brands because it was impossible to merge the two. Since I wanted to tap a bigger market, I also had to cater to women who prefer simpler, more classic and wearable pieces. Not everyone can wear edgy platforms,” he says.

And where do Ramiro’s gadgets come into the creative process?

The designer says he does not trawl the Internet in search of shoe designs to copy. On the contrary, he doesn’t look at other shoe designers’ current works.

“When I sit down to work on a collection, I don’t want to be influenced in any way by others, as I might subconsciously end up copying their designs,” he reasons.

Instead, he uses his laptop to research on possible design inspirations to help him produce a fresh collection. His main sources of inspiration for Monster shoes, for instance, are street

“I took my cue from such luxury brands as Celine and Prada,” he says. “They get ideas from the streets, but they upgrade them by giving their products a more luxurious take.”

As for his Instagram posts (monster_shoes), Ramiro already has an entire month’s supply of materials. By sharing his work and snippets of his personal life on social media, the designer is able not only to promote his shoes but also get important feedback from followers the world over.

“Feedback is important to me,” he says. “Whether they buy my shoes or not, I make it a point to listen to other people.”

Ramiro, one of the finalists in the 2013 Look of Style Awards’ accessories division, began professionally designing shoes in 2012 after years of designing shoes for himself.

“No matter where I searched, I couldn’t find ready-to-wear shoes that I really liked,” he says. “I ended up designing my own shoes after I found the ideal manufacturers in Marikina. I still tap these manufacturers today to do shoes for my two brands.”

It was simply a matter of time before this interior design graduate from the Philippine School of Interior Design parlayed his passion for shoes into a lucrative business.

After shocking people with his edgy and sometimes over-the-top designs for Monster shoes, Ramiro felt that it was high time to dial down a bit by providing the market with more formal and classic-looking footwear that would still make heads turn.

And everything starts in the family’s converted living room inside one of Metro Manila’s bustling communities.

Ron Ramiro’s shop/office is at 9 Banner Ave., 4th Estate Subdivision (along Sucat Road), Parañaque. E-mail him at [email protected] or check out his latest styles at www.monster-shoe.com.