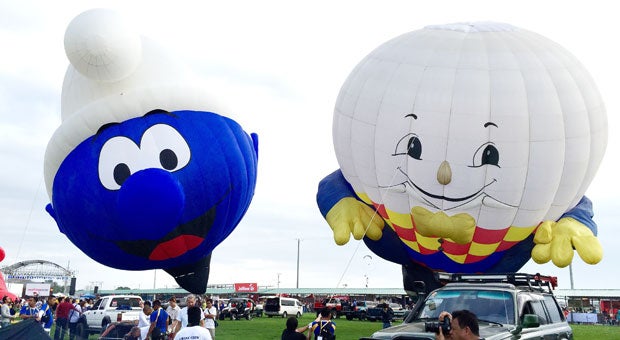 LUBAO, Pampanga, Philippines — The 2nd Lubao International Balloon Festival kicked off here Thursday despite windy conditions preventing some of the balloons to take off.

According to Noel Castro, event chairman, some of the pilots didn’t want to risk flying during very strong wind conditions.

“If the balloonist felt that the wind was too strong, he won’t take off, but you see, most of the balloons were able to fly,” he told INQUIRER.net.

Hundreds of local tourists flocked to the festival venue in Pradera Siongco village as early as 4 a.m. to witness the 42 participating balloons from different countries all over the world.

Fifteen of these balloons are special-shaped like Darth Vader, Yoda, Birthday Cake, Smurf and Humpty Dumpty.

Aside from ballooning, festival-goers were also treated to other exciting activities such as motor paragliding, kite-flying, band performances and night glow.

The Lubao balloon festival, dubbed as the biggest in Southeast Asia, will run until Sunday, March 29. DL