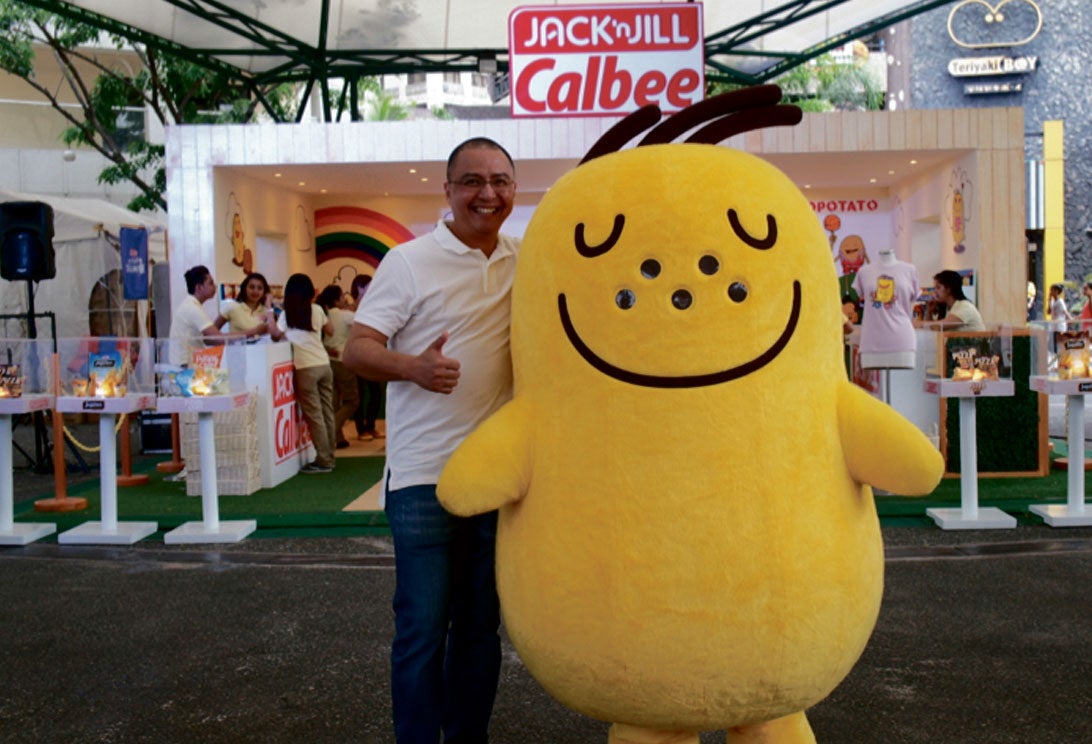 We love potatoes and anything crunchy. It has always been our dream to create a website that will review nothing but crunchy snacks from all over the world. In Japan, hunting down and trying Calbee’s wide (and weird) variety of potato chips was part of our itinerary.

For Calbee fans, though, a unanimous favorite would be Jagabee—the name combines “jagaimo,” Japanese for potato, and Calbee—crunchy potato sticks that taste like perfect French fries. If you’re the type of person who hunts around a carton of fries for the tiny crunchy ones, Jagabee is a cupful of only the crunchy bits.

As of two weeks ago, one need not go to Japan to get a Calbee fix; the Japanese brand has partnered with Philippine snacks expert Jack ’n Jill to make their chips available here.

According to Universal Robina Corp. (URC) general manager and VP for marketing of snacks Teree Eugenio, the tieup between the two brands is a marriage made in heaven. “Calbee came to us because one of its top strategies was to expand around Asia, while we have been wanting to compete in the premium segment of the local market. We have similar values and complementary strengths.”

A new dedicated factory was built for the new partnership, with Japan bringing in new technology for Jagabee and Pizza Potato, another variant in the new snacks lineup.

“Calbee has technology like putting melted cheese on the pizza-flavored chips; for Jagabee, it’s called ‘vacuum-frying,’ in which real potatoes are sliced and fried to be crunchier than your regular fast-foodchain fries,” says Eugenio.

While Calbee in Japan is known for unusual flavors like spareribs, consommé and takoyaki, among others, Filipinos are still hard-core cheese lovers.

“The Japanese research-and-development team was surprised at how much we love cheese here,” says Eugenio.

While each flavor went through consumer taste tests to ensure popularity, one flavor that got the green light without any testing is Wasabi, a nod to Calbee’s Japanese roots, and a treat for wasabi lovers because the flavor is really strong.

Indeed, the Wasabi potato chips are so intense that we wanted to bring it to a Japanese restaurant and crumble it all over sushi to add crunch to our spicy tuna maki.

We are potato-chip purists, and we’re crazy over the Classic Salted version; the potatoes are sliced perfectly—so thin to be satisfyingly crunchy but thick enough not to feel too greasy.

The amount of salt is just right, you won’t feel like you’re biting into crunchy salt blocks and subtle enough that you’ll just keep popping it in your mouth.

Buy a bag of the Cheddar and Sour Cream, and mix it with a bag of Classic Salted for the perfect treat.

To introduce Filipinos to Jack ’n Jill Calbee, a roving pop-up store was set up. Snag limited edition Calbee merchandise imported from Japan, such as pencil caps, stationery, key holders, french fry-shaped phone charms, stickers, Jagabee lids (as if you can’t finish a cup in one sitting), T-shirts and plushies of Jaga—Jagabee’s happy and rotund mascot—including one whose mouth zips open to reveal a compartment for you to store a phone or a Jagabee cup.

There are fun interactive booths: a sumo game in which you can don potato-shaped sumo-wrestler costumes and battle an opponent to win a prize; a Fruit Ninja-inspired potato slicing game; and a first-taste selfie booth.

The next pop-up store will be at Alabang Town Center tomorrow until Sunday (March 28-29) and at Bonifacio Global City on April 11-12.

While the snacks are already available at supermarkets and convenience stores, make sure to drop by the pop-up store to buy the limited-edition stuff.

To know more about Jack ’n Jill Calbee, follow on Instagram, @jacknjillcalbee; and check out the hashtag #bestopotato.