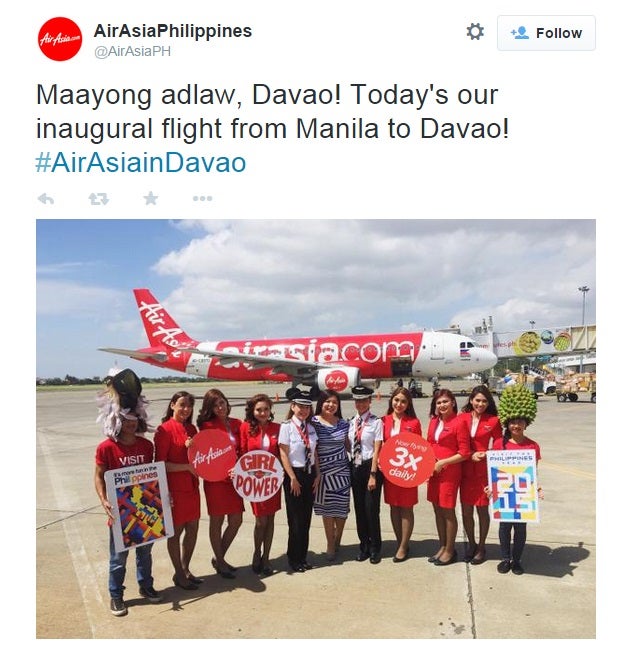 DAVAO CITY – AirAsia Philippines re-launched on Friday its Manila-Davao-Manila flight through Flight Z2611, which was manned by an all-female crew.

AirAsia officials said the re-launch of the Manila-Davao route manifested its recognition of the city as an important gateway to Mindanao.

The airline company said it will serve the Manila-Davao route with three daily flights.

Jenny Bugarin-Tan, AirAsia communications chief, said the company took on the route in 2013 after it partnered with the former operator, Zest Air.

“Manila-Davao was operated by Zest Air then and when AirAsia partnered with Zest in 2013 via strategic alliance, it was suspended in June 2013 as part of realignment of our network,” Tan said.

“We are very happy to be back in Davao again,” Cañeba told reporters during the resumption of the service.

She said the airline company also decided to use an all-female crew during Friday’s re-launch of the service in deference to the Women’s Month.

“At AirAsia, women work shoulder-to-shoulder with their male counterparts from the office of the CEO, flight operations, engineering, cargo, ramp, ground services to key operational and support departments. We are very proud of their achievements and contributions in ensuring that we give only the best, quality service to our passengers,” Cañeba said.

Flight Z2611 from Manila was piloted by Capt. Gisela Bendong, a Cebuana. She and her co-pilot Andrea Maria Halagueña landed the plane at the Davao International Airport around 9:35 a.m.