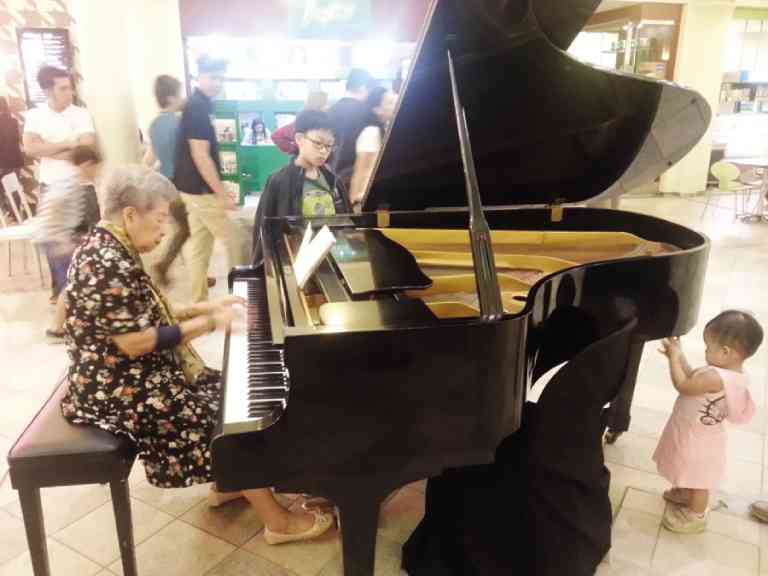 HOW DO YOU keep the music playing? Only heaven knows, says Sari, 92 and turning 93.

Age is just a number

It’s a busy Saturday night at Power Plant Mall in Rockwell, Makati—the chatter of diners and clinking of tableware in the restaurants filling the background. But the noise is pleasantly muted by the lovely sound of a piano being played by an elderly woman at the center of the Food Court.

A man has volunteered to be the singer, providing the vocals to one Tin Pan Alley classic after another, as passersby stop and look at the lounge-style performance.

The pianist is Priscilla “Sari” Tiongco-Canicosa, whose dexterity on the ivories belies her age. “I’m 92, turning 93 this May,” she tells Inquirer Lifestyle, adding that she’s been playing at Rockwell for the past 15 years.

The music continues, many of the songs—including “I’m in the Mood For Love,” “I’ll Be Seeing You,” “Smoke Gets in Your Eyes,” “Stardust”—from a distant period one probably won’t hear anywhere else, except perhaps in jazz clubs abroad, or in the den of an avid record collector.

“I guess it’s a passion as well as a diversion,” Sari says, trying to explain what keeps her going. “Only heaven knows why I’m healthy all these years.”

Meanwhile, the vocal trio Tiongco Brothers pumps energy into an otherwise sleepy weekend at the newly opened Little Theater Events Hall on Gorordo Avenue, Cebu. The group, performing without a backing band, sings with so much life and impeccable timing that the prerecorded tracks don’t matter at all.

Emil, Jun and Arthur Tiongco are the brothers of Sari, the eldest among 10 siblings, five of whom have passed on. Emil, the seventh in the brood, is 77; Junior (Fernando), the sixth, is 78; and Arthur, the youngest, is 72.

Onstage, they personify the saying that age is just a number; their enthusiasm is infectious, their voices gliding in smooth harmony that infuse the songs—“Tonight,” “Going Out of My Head,” “You’ll Never Walk Alone,” “Volare,” “Love Is a Many Splendored Thing,” “McArthur’s Park,” Platters medley—with lilt and youthfulness.

The hall is practically empty, save for two tables—one occupied by Honey Jarque Loop and family; the other by the venue’s owner, Sylvia Cancio, who has come home to Cebu from the US where she’s based. Sylvia wants friends to see her Little Theater through a small gig, the reason for this “private party,” with the Tiongco Brothers as guest artists.

But the performers deliver a show that’s maybe on the same level as when they became the first Filipino act to sing at the Sydney Opera House in 1971, or at the Aramco compound in Saudi Arabia in 1976. “We were invited to become Australian citizens because we spent some 10 years performing there,” says Emil, “and were well-received in Saudi that we were given a ‘key’ to Aramco.”

But there’s still no place like home for the Tiongco Brothers, as they look forward to keep singing, says Emil, “till God knows when.”

BenCab in the house

At the Crosby, Stills and Nash (CSN) concert at Smart Araneta Coliseum, the crowd is composed of ex-hippies, or at least those who came of age knowing the music of the 1960s and ’70s.

In the front row, National Artist for Visual Arts BenCab claps his hands vigorously with every number; he’s probably remembering his early years living at the back of the Indios Bravos club, where Manila’s counterculture gathered amid the music of the period including that of what was originally CSNY (including Neil Young).

Smiling from ear-to-ear is Eddie Boy Escudero, who was in high school at La Salle Greenhills in 1974 when CSNY was at its peak.

We spot Mike LLamas, aka Stoney Burke of DZRJ-AM, the radio station that helped turn on a multitude of Pinoy youth to rock music as art; also present are former RJ “rock jocks” Cousin Hoagy, Bob Magoo, The Doctor, The Gaucho, The Domino, among others.

As CSN plays “Our House,” Manny Garcia—whose dad Tony used to run the radio station Kiss-FM—asks us: “How come you know these songs?”

Really, age is just a number.

Jazz in the city