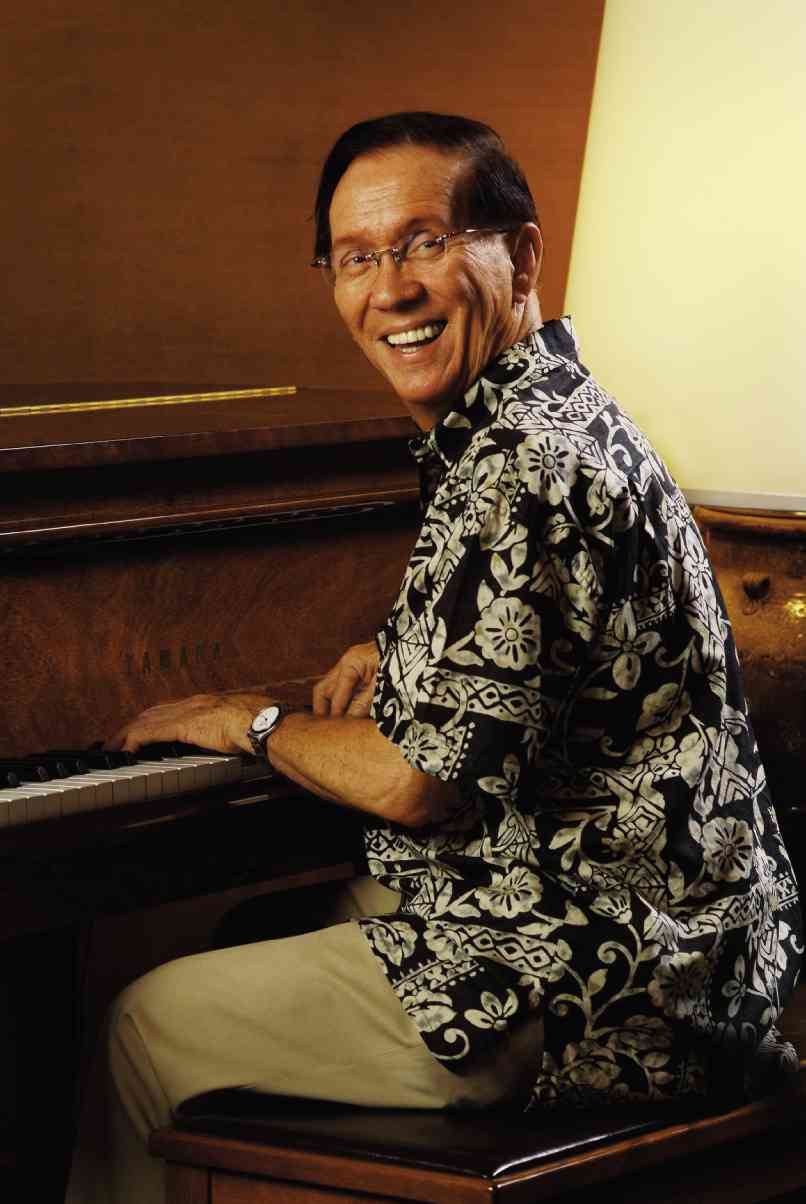 Bobby Mañosa: The autumn of the architect

At 84, Architect Francisco “Bobby” Mañosa still goes to work every day, although he has slowed down considerably since a nasty fall three years ago, when he cracked two vertebrae which had to be fused.

One can imagine Mañosa joking about the engineering interventions needed to shore up his aging structure—a little architect humor there.

In any case, these health issues have caused him to drastically cut down his work day to a couple of hours at most. Gone are the long hours of meeting clients, creating designs, visiting jobsites—hands-on work that he used to do well into his 70s.

But still he comes to the office every day, dressed immaculately in crisp polo barong. On good days he will look over a junior designer’s plans and offer a few suggestions, or simply trade jokes with colleagues. Often his mere presence is enough.

There was a time not too long ago when you couldn’t shut him up about his consuming passion: Filipino architecture and the sore lack thereof in the Philippines.

Get him started by, say, mentioning the proliferation of cookie-cutter row housing built in the “Mediterranean” or “California” styles by some megadeveloper; and brace yourself for hours of rant as to why the theme-park garishness of these foreign architectural styles was totally unsuited to our climate, our lifestyles, our culture—a horrible blight on the otherwise beautiful landscape of our beloved motherland.

“Form should follow function, but here, form follows fashion,” he was fond of saying.

Long before he became the Bobby Mañosa of the Coconut Palace, the Edsa Shrine, the Davao Pearl Farm and Amanpulo resorts and other landmark structures, his credo was that architecture had to be true to its country and its people, that culture had to determine the final form of a building and that local materials were best for local conditions.

He spread these strongly held beliefs with a missionary zeal, taking time off from paying work to lecture at architectural schools, or speak at seminars and conventions whenever such occasions presented themselves.

As Asian architecture scholar Robert Powell summed up in his recently released book, “Contemporary Houses in the Philippines: New Directions in Tropical Architecture in the Philippines,” “[Mañosa] has devoted a lifetime’s work to reinterpreting the traditional vernacular.”

His endless fascination with the humble bahay kubo and the bahay na bato and his championing of indigenous materials from Day 1 have evolved into the hallmarks of the Mañosa style: sensitivity to climate, a sense of spaciousness and openness, structures harmonizing with the landscape, and a sense of playfulness expressed in such things as a salakot-shaped roof or a beam sculpted like the prow of a Moro vinta.

In addition there are little touches and details that evoke vernacular forms, for example awning windows held up by tukod, steep roofs topped with decorative finials, a silong built into a modern structure.

For more than five decades he was a lone voice in the wilderness, preaching “back to the bahay kubo and the bahay na bato,” while contemporaries such as Lor Calma and Leandro Locsin explored the innovations of Le Corbusier, the Bauhaus school and later Frank Gehry and Kenzo Tange.

The fact that he has situated himself at the polar opposite of the modernists has made Mañosa something of a contentious figure in local architectural circles. Although many younger architects such as Ning Encarnacion-Tan and Emmanuel Miñana have been strongly influenced by his work, just as many have rejected his neovernacular approach, perhaps finding it too “Filipiniana” in its use of motifs and patterns drawn from traditional structures.

The main objection to his style is summed up by architect Royal Pineda, as quoted by Powell: “Modern architecture needs to respond to the lifestyles of today and the future. It has to move forward. It is constantly evolving. We should not be restricted by images of the bahay kubo and bahay na bato.”

As Powell noted, “One criticism leveled at Mañosa’s approach is that ‘you cannot export it.’ But is that valid, for Mañosa has always been primarily concerned with creating a Filipino identity in architecture?”

“In order to design Filipino, you must understand what it means to be Filipino,” he was also fond of saying.

As early as the late 1950s, with brothers Jose and Manuel Jr.—both also architects of note—he was already mining vernacular forms. The Sulo Restaurant, an early Makati landmark, drew on motifs from Muslim Mindanao. One of the brothers’ last collaborations, the corporate headquarters of San Miguel Corp., was inspired by the Banaue rice terraces.

On his own, Mañosa pulled off a tour de force in the Tahanang Pilipino, completed in 1980. Meant to be a guesthouse for visiting performers at the nearby Cultural Center of the Philippines (CCP), the two-year project soon escalated into the tropical baroque “Coconut Palace” as the architect explored new uses for the coconut tree, as well as other indigenous materials, creating a number of previously nonexistent downstream industries in the process.

Mañosa’s work seemed to be an organic extension of the man himself: A traditional family man, he excelled in designing supremely livable homes that invite family togetherness. A devout Catholic—a Papal Knight, no less—Mañosa also excelled in religious architecture, designing the Edsa Shrine as well as the so-called “nature church” in the Mary Immaculate Parish in Las Piñas, an inspired design whose anahaw roof seemed to hover weightlessly over the worshippers, as they knelt on pews which seemed to grow out of the ground.

Every project expressed the architect’s own quest for Filipino identity.

“I design Filipino, nothing else,” Mañosa declared early on and made good his boast, even if it meant turning down lucrative jobs that didn’t meet his aesthetic standards. He had built up a successful practice, specially after the Tahanang Pilipino. There were also lean years, when he could have used the money being offered him to design more conventional projects, but Mañosa has stuck to his guns all these years.

The controversial nature of Mañosa’s life work could also explain why few took up the cudgels for him when he found himself embroiled in the National Artist Award scandal of 2009, even though he had been short-listed for the architecture category years before and many still believe he is deserving of the award.

In any case, it’s all water under the bridge now.

Mañosa & Co., the architectural firm that he built over half a century of work, continues his mission of championing modern Filipino design.

The heavy lifting he leaves to his three children: Dino, who heads the company’s property development arm; Angelo, who is chief designer for the architectural firm; and Bambi, who is in charge of interior design and the company’s educational foundation.

Although keeping to the house style, the firm has newer designs that push the envelope of what modern Filipino architecture can be, incorporating technical innovations that make the structures “green,” that is to say, climate-responsive and energy-efficient.

They are no longer alone. “Contemporary Filipino” is the current buzzword in au courant architectural circles.

While the popularity of the Mediterranean and California bungalow styles remains undimmed, “tropical” Southeast Asian styles are all the rage, and Filipino design is no longer the poor relation ushered in through the back door, but an equal and increasingly popular option for young and well-heeled homeowners. 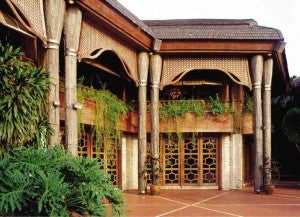 Young design hotshots such as Jason Buensalido have won acclaim for designs that draw on the bahay kubo and bahay na bato for inspiration. It’s not just budget homes; even deluxe multimillion-peso residences designed following modern Filipino lines are no longer unheard of.

Bobby Mañosa has lived to see his dream finally realized: the lowly bahay kubo and the quaint bahay na bato finally elevated to their proper place as expressions of the native Filipino genius. It’s just ironic that his own role as Filipino architecture’s most vociferous champion and tireless proselytizer isn’t more generally acknowledged, a prophet unrecognized in his own land.

“It’s a generational thing,” says Angelo Mañosa. “The younger generation is the privileged generation. They don’t really pay homage to the past. It’s really the older architects, those in their 40s and 50s, who acknowledge my dad’s influence.

“He really planted the seeds that are bearing fruit today,” he continues. “He wasn’t the only one, of course, but he was really one of the pillars, and it’s good that we’ve come to a point as a country where we can take pride in being Filipino. Even in such areas as fashion, people have become more nationalistic.

“People now have different interpretations of what contemporary Filipino architecture should look like,” he continues. “Some can get very space-ageish; ours is more toned down. We still carry the very simple bahay kubo lines, and that tends to differentiate us. Our designs may not be very trendy, but they hold their own over time. Twenty, 30 years on, they’ve stood the test of time.”

Mañosa’s legacy has also been institutionalized in the firm that bears his name.

“For the past 30-odd years of the firm, we’ve been consistent in only designing contemporary Filipino or vernacular architecture,” says Angelo. “Not many firms can say that. And we’ve been doing it for two generations already.

“What’s critical is if you have it in your core beliefs. If you really believe in it, it will always come out. It becomes natural. It puts soul in your architecture if you truly believe it. If you do it because you’re following a trend, that’s when it starts to show that it’s superficial in its form. That shines through in time.”

A case in point are the townhouses being designed and built by Mañosa Properties, a spin-off company headed by Dino Mañosa. These are medium-sized, premium-priced “artisanal” housing developments designed in the Mañosa style, which is to say modern urban housing that evokes the style and livability of the bahay kubo and bahay na bato templates, a concept whose time has come, judging from the way units are being snapped up as soon as they go on the market.

“We’re probably the only real estate company in the country that’s based on a design philosophy,” says Dino.

“We could do what every other developer is doing, building cookie-cutter condos,” he continues. “The money is fantastic and it’s easy. But that’s not our reason for being. Our reason for being is really to instill national pride and to showcase the Mañosa design philosophy.

“We’re not saying that you’re wrong if you design something that’s not Filipino,” he says. “At the end of the day, it’s really a matter of taste. But as an architectural firm, it’s really our way of pushing love of country.”