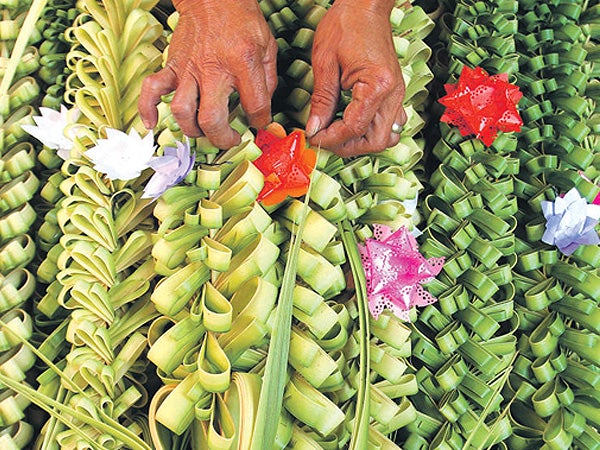 Think before you wave that palm leaf

MANILA, Philippines – Christians worldwide began to observe Holy Week on Sunday with the celebration of Palm Sunday, the remembrance of Christ’s triumphant entry into Jerusalem before His suffering and death almost 2,000 years ago.

In the Biblical sense, remembrance (anamnesis in Greek) may mean “making present” a past event “in the here and now,” as defined by the New Catholic Encyclopedia.

Therefore, when Christians participate in the Palm Sunday liturgy and wave their palaspas (usually palm or woven coconut fronds), it would be as if they are among those who cheered and welcomed Jesus as He rode a donkey on the road to the Holy City.

They will be joining the crowds who shouted “Hosanna! Blessed is he who comes in the name of the Lord, the king of Israel,” (John 12:13) while proclaiming Jesus as king and messiah—God’s anointed, the savior.

The fronds are kept or displayed until the following year to be burned so that its ashes may be used to mark crosses on the foreheads of believers on Ash Wednesday.

Church leaders caution the faithful, however, about certain misunderstanding about the palaspas which some consider as an amulet (anting-anting) or of having miraculous powers.

Healing priest Fr. Joey Faller said in a radio interview that the blessed palms or coconut fronds were mere symbols of a Christian’s acceptance of the kingship of Jesus and His being savior.

Faller, founder of Kamay ni Hesus healing center in Lucban, Quezon, said Palm Sunday should remind the faithful of Christ’s Passion: His suffering and death, which is why it is also called Passion Sunday.

The Catholic priest said the Palm Sunday celebration should lead people to other events of the Holy Week, which signals the last days of the yearly 40-day Lenten season.

Lent focuses on the last, most important earthly acts of Jesus, whom Christians believe to be God’s Son who became man and offered Himself as a sacrifice to save humanity from sin and death.

The author writes “Tumbukin Natin,” a blog in Filipino (http://tumbukin-natin.blogspot.sg), which seeks to explain Catholic beliefs and practices to the common man.