On the podium, Fukumura cut a magnetic stance, conducting from memory the first two pieces, Rossini’s Overture to “Semiramide,” which the PPO essayed with festivity; and Haydn’s Symphony No. 82 in G.

One enjoyed following the movements of his hands: the right hand actively setting the metronomic count, and the left sensitively defining the dynamics.

I discerned a “Ferrara touch.” True enough, his profile contained the information that he studied with the great Italian conductor Franco Ferrara, who had at one time performed at the Cultural Center of the Philippines.

Next, he etched with courtly elegance Haydn’s Symphony No. 82.

The musicians were inspired and played with gusto. The ensemble playing was superb, achieving wonderful balance and uninhibited intonation. 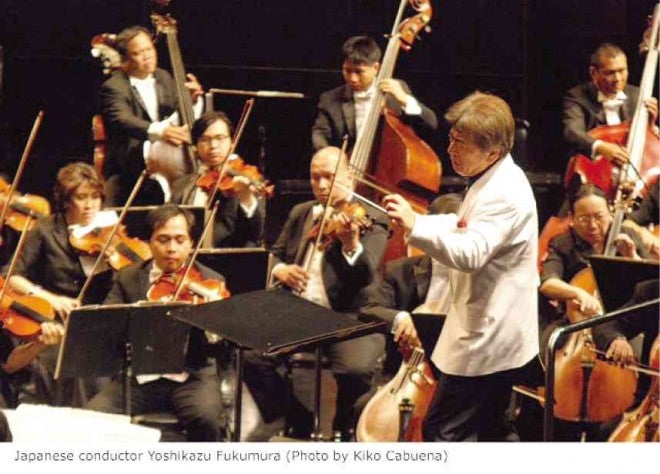 Dynamic orchestral colors were at its height in Ravel’s “Ma Mere l’ Oye,” which showed the composer’s astounding use of nonsymphonic traditional instruments.

Easily, under Fukumura’s sensitive leadership, the PPO wove silken texture that was a pure delight to hear. It was only in this work that the score was laid on the stand to guide the conductor.

Curiously, though, the conductor did not leaf through it, merely glancing at it once in a while. Obviously, he gave more premium to achieving rapport with the musicians.

The concluding piece, Khatchaturian’s suite from “Masquerade,” was played with high energy. The audience was swayed by the surging waltz; on the next part, it was bitten by the tranquil strains of the solo violin, and on the end part, overwhelmed by the sprinting symphonic sound.

Standing ovation greeted the conductor, who obliged an encore, the first part of the “Waltz” suite, much to the enjoyment of the audience.