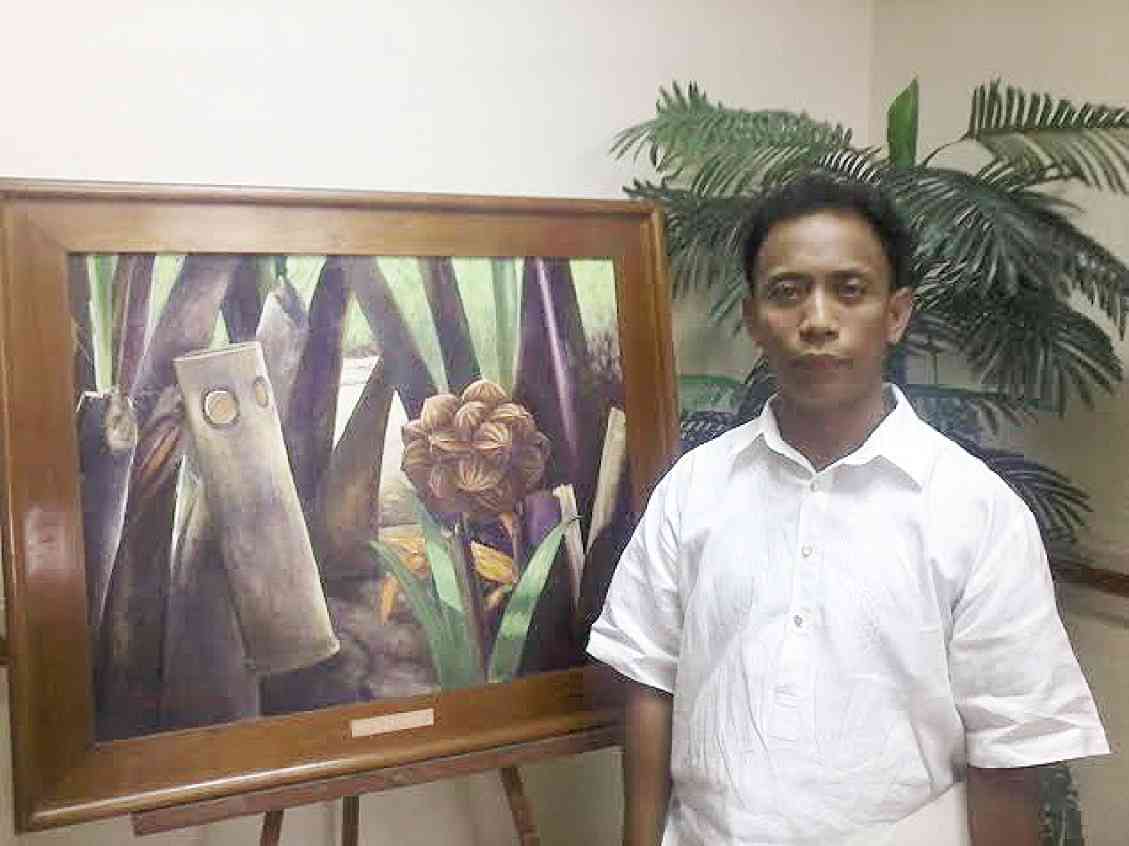 REY Salamat and his work “Tukil”

There is more than just vinegar in Paombong, Bulacan.

In a town known for its sukang sasa or nipa vinegar, a recently revived artist group held a week-long art exhibit aimed to revitalize the town’s art tradition that dates back to the 19th century.

“This exhibit is [our] first attempt to bring back to life the art tradition in Paombong,” said Rey Salamat, vice president of the Paombong Arts, Culture and Tourism Council (PACTC).

Aside from Salamat, local artists who took part in the exhibit were Alfredo Buenaventura, Froilan Calayag, Allan Jumaquio, Welbart, and Renz dela Cruz. Exhibit ran from February 23-27, 2015, at the 2nd floor lobby of the Paombong Municipal Hall building.

The event, “Paombong: Bulacan’s Prime Pride,” was also marked by cultural performances at the town’s covered court. It is part of the National Arts Month celebration of the National Commission for Culture and the Arts (NCCA).

Aside from the exhibit and cultural performances, a painting demonstration and a culinary festival were also held.

In April, the PACTC will hold an arts workshop while in June, the Sasahan Festival will again be staged after 12 years.

“The PATC will help [the local government] for the effective flow of tourism in Paombong,” said Salamat.

This would include the village of Kapitangan where the yearly Lent tradition of devotees nailed to the cross is held. This event was well known before compared to the now famous Cutud in San Fernando, Pampanga according to Salamat.

Paombong boasts of a number of award-winning artists starting with Teodoro Buenaventura in the 19th century to Cezar and Alfred Buenaventura, Tomas Bernardo, Miguel Galvez, Nap Trono, Calayag and other present-day artists.

It is the most prominent town in the province of Bulacan in terms of arts and culture, said Salamat.

Teodoro Buenaventura is considered to be the father of Bulacan art and one of the founders of the University of the Philippines School of Fine Arts, said art patron and the event’s organizer Jo Clemente.

The event featured works done by Buenaventura and other artists from past to present, the first of this kind in Paombong, according to Clemente.

This should influence the students of the town to be better artists or to influence them to be artists by their own right, Clemente said.

His book on Philip Victor, another Bulacan artist from Hagonoy town, is set to be released this April. Published by NCCA, it features more than 400 major paintings of Victor as well as more than a thousand of his sketches.

Clemente owns and maintains the Museo Clemente in Paombong which has a vast collection of artworks by Bulacan artists.