In the footsteps of St. Teresa of Avila | Inquirer Lifestyle ❮ ❯ 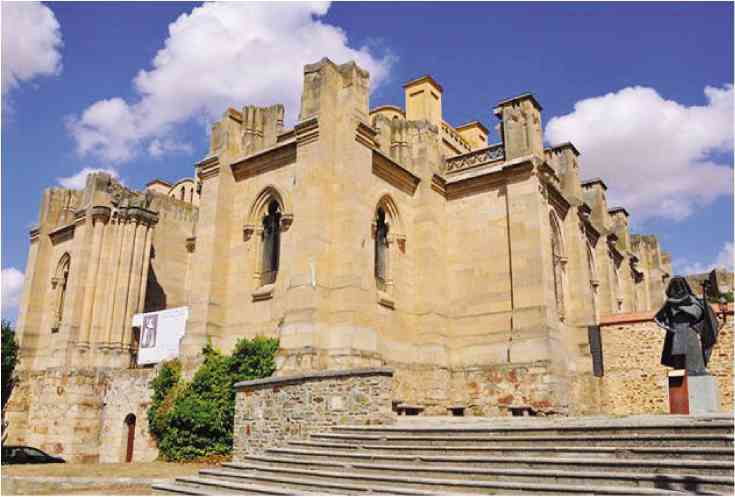 THE CARMELITE Monastery of the Anunciation in Alba de Tormes where St. Teresa’s remains are buried and displayed in a small chapel together with relics of St. John of the Cross.

In the footsteps of St. Teresa of Avila

Avila, generally regarded as the finest walled city in Europe, is hosting starting March 28 an international pilgrimage in connection with the fifth birth centenary (1515-2015) of St. Teresa of Ávila, the 16th-century Carmelite nun, great Spanish mystic, celebrated spiritual writer and poet. Foundress of the Order of Discalced Carmelites (Barefoot Carmelites), she was a religious reformer, the first woman Doctor of the Church and patroness of Spain.

Located 112 km (70 miles) northwest of Madrid, Ávila is a picturesque and lovely city, a renowned destination for Catholic pilgrims and tourists throughout the world because of its association with Santa Teresa (also called St. Teresa of Jesus).

This writer was privileged to visit the idyllic and quaint town twice during his nine-month postgraduate studies in Madrid on a travel-study grant from the Spanish government. It was a moving and memorable experience to be in this medieval town and to explore the various religious and history-filled sites where St. Teresa left her indelible footprint. A visit to Ávila is truly a journey into an ancient, fabled past, and an experience of a life time. The town was designated a United Nations Educational, Scientific and Cultural Organization World Heritage Site in 1985.

Ávila abounds with Teresa’s memorabilia. The 17th-century Convent of St.Teresa (which is actually where she was born) is the primary shrine. Located inside the church’s museum is the “Sala de Reliquias,” which houses the relics of the saint, such as the cradle in which she was born, the font where she was baptized, a finger from her right hand, the sole of her sandals, her rosary beads and a cord she used to flagellate herself. It is said that “her right foot, left eye and part of her jaw are on display in various sites around the world.” These relics from St. Teresa and others from a lost time make Ávila one vast and fascinating museum.

There are several fascinating religious monuments within Ávila, but the walls are by far its most magnificent attraction for tourists and pilgrims. In fact the late Fr. Miguel Anselmo Azcona Bernad, SJ said, “Ávila in Spain is a picturesque city because of the walls that surround it. It is said to be the most beautiful walled city in Europe. The walls which today are a tourist attraction, and which are spectacular on summer nights when they are illuminated, served a very practical purpose in the middle ages. They protected the citizens from attacks by the invading Moors. At the same time, they served to engender a martial spirit in the city’s inhabitants.” In one of his letters to this writer dated May 15, 1983, he mentioned that “Ávila is a beautiful city, and Teresa a great saint.”

Only some sections of the walls’ circumference are reserved for visitors to promenade atop and enjoy an awe-inspiring and breath-taking view of the city and its surroundings, within its walls and beyond them. This writer was overwhelmed the first time he took a fascinating stroll and stood atop the massive walls—a unique experience that gave him the feeling of immense joy and ecstasy for minutes on end.

The medieval town of Ávila is the best example of a walled city in Medieval Spain. Known locally as “Las Moradas” (dwellings or abode), the magnificently well-preserved wall encircling the city stretches some 2.5 km in length. Rising some 12-20 meters high with a thickness of 3 meters, the majestic walls took nine years to erect and almost 600 years to complete. Eighty-eight fortified towers and nine elaborately carved stoned gateways give access to the city.

As one enters “la Ciudad de Santos y Piedras” (the City of Saints and Stones), the walled city of Intramuros immediately comes to mind. The superbly preserved wall is truly amazing and a must-see in Ávila!

Santa Teresa Sanchez de Cepeda y Ahumada was born into a noble family of Ávila on March 28, 1515. At age 20, she took the Carmelite vows in the Carmelite Monastery of the Incarnation in Ávila on Nov 2, 1535.

“Teresa,” according to a biography, “had beauty, charm, literary genius of a high order; an administrative ability second to none; humor and tenderness and common sense…the courage and resourcefulness of a great soldier, and the patience, obedience and humility of a saint.”

She devoted the best years of her life writing down her mystical experiences. (Mysticism “is the belief in direct experience of transcendent reality or God, especially by means of contemplation and asceticism instead of rational thought.”)

Most of her writings were autobiographical and were written “under the express command of her confessors and superiors to give an accurate and detailed account of her spiritual progress.”

Despite her limited formal education, four of her works: “Las Moradas” (The Mansions), “Camino de Perfección” (The Way of Perfection), “Libros de las Fundaciones” (The Foundations) and “Libro de la Vida” (The Book of Life) are among the world’s classics. Her books and poetry on mystical literature consequently earned for her the title of Doctor of the Church. With the Augustinian Fray Luis de Leon and the Carmelite mystic St. John of the Cross, Santa Teresa formed the glorious triumvirate in Spanish literature.

The reforms that St. Teresa started had left a mark in almost all religious communities of the world. In the superhuman task of establishing monasteries of her reformed order, “she was misunderstood by her own fellow religious, she was rebuffed by bishops, threatened by the Inquisition, and this, amid trials of sickness enough to break a weaker spirit.”

St. Teresa died on Oct. 4, 1582, at the age of 67 in Alba de Tormes, 22 km (14 miles) southeast of the province of Salamanca. She was buried the following day “(which was Oct. 15 because the introduction of the Gregorian calendar involved the dropping of the intervening dates).”

St. Teresa’s incorrupt body is kept along with two of her most renowned relics: her left hand and her heart. In the sepulchral silence of the monastery, we were ushered by the Mother Superior to the monastic cell on the ground of the chapel where the restless St. Teresa had “frequent visions with God and mystical experiences before her death.”

St. Teresa’s body was exhumed on several occasions after her death, and “each time her body was found sweet smelling, firm and incorrupt.” The heart was extracted and found to have a perforation, “reflecting one of the greatest mystical experiences.”

Encased in a stunning glass reliquary and placed above the main altar of the Church’s museum, the incorrupt heart, decorated with gold and silver miniature hearts and other precious stones—the gifts of sovereign rulers, monarchs, Pontiffs, chiefs of state all over the world—can be viewed in the Sepulcro de Santa Teresa.

An interesting story was told by the Mother Superior while this writer was taking close-up photos of the precious relic.

“There was a time in the year,” she said, “that St. Teresa’s heart bleeds and expands causing the glass cylinder to break.” Personally, it was such a great blessing and privilege to see St. Teresa in the flesh that I do not think I have spent a more wonderful day in my life. If there is nothing to see in Salamanca except this precious heart, it would still remain one of Spain’s greatest attractions and her most significant treasure of the past.

St. Teresa was beautified by Pope Paul V on April 24, 1614. Forty years after her death, she was declared saint by Pope Gregory XV on March 12, 1622, together with Saints Ignatius de Loyola and Francis Xavier. In 1817, the Cortes (Spanish Parliament) exalted St. Teresa and made her the female patron saint of Spain. On Sept. 27, 1970, Pope Paul VI made St. Teresa Doctor of the Church, the first woman in history to be so honored.

It was shortly before dark and the whole town carpeted with snow, when our group left Alba de Tormes en route to Madrid. We were spiritually rejuvenated. As our car moved on through the labyrinth of narrow roads, I remembered St. Teresa’s confession in her autobiography:

“All is nothing, the world is vanity, life is short. All the things of God gave me pleasure, but I was held captive by those of the world.”

Ramon M. Roda is an indefatigable traveler, a retired professor of Spanish and Rizal Course at the College of Commerce and Business Administration of the University of Santo Tomas.