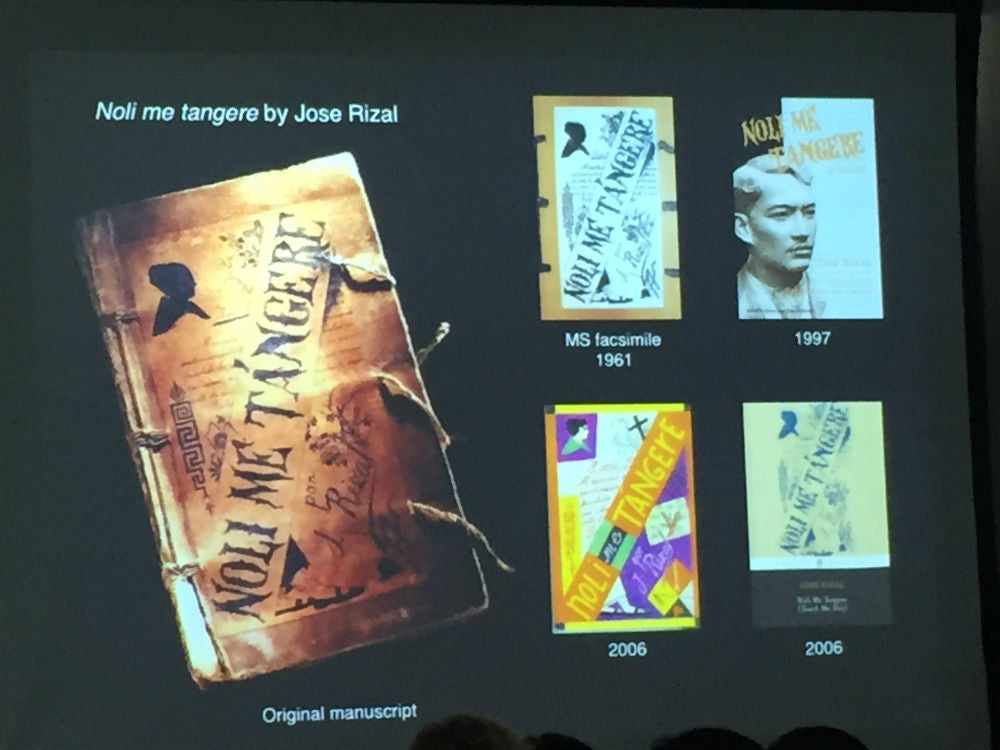 Photo from Dr. May Jurilla's presentation during the "Never say 'Never Judge a Book by Its Cover" forum at Ayala Museum

Why it’s okay to judge a book by its cover

MANILA, Philippines – We have always been told not to judge other people by their physical appearance: “Don’t judge a book by its cover” as the English idiom goes. But in the publishing world, a book’s cover can sometimes be as important as its content.

“Books are judged by their covers” was May Jurilla’s matter-of-fact quip last March 14, during the “Never say ‘Never Judge a Book by Its Cover’” forum at the Ayala Museum.

The Filipinas Heritage Library-hosted event “debunks the myth that covers shouldn’t be judged,” she added.

Jurilla, who is considered the first Filipino book historian in the country, said book covers are more “than just surface matter.”

Eventually, these covers contribute to a collectible book’s market price.

One first-edition copy of The Great Gatsby, for example, was priced £125,000 (about $194,000) by the UK-based rare-book site The Jones Brothers in 2013. A couple of years before that, Bonham’s auction house sold another copy at $180,000. In addition to The Great Gatsby having one of the most famous cover art of all time, many of the first-edition copies have lost their dust jackets (the detachable outer cover of a book).

During her talk, Jurilla discussed the evolution of book covers. From simple-binding, books became more embellished. Some covers were decorated with jewels or were made from ivory. Custom-binding also became somewhat popular.

“Dust jacket art would be used to establish the identity and image of the book. It will also be eventually employed for the purpose of branding of the author, as well as of the publisher,” she added.

Jurilla pointed out that the dust jacket has become a space for advertising and, at times, a “medium of art.”

She explained that while the company did not invent the paperback, it “utilize(d) it in a manner and scale that has never been done.”

“It is such a significant figure in the history of the book,” she said. “We owe the paperback to Penguin.”

Jurilla’s slides on Penguin’s book series and covers, which started out with simple, color-coded designs, seem to also be reflective of the particular graphic trend at the time.

“Cover design was the key factor in the building of the Penguin brand. And the books would become collectibles specifically for the covers,” the book historian said.

Later, cover art would be hinged on the name of famous authors, which have become brands themselves.

Jurilla said this was done for the likes of Stephen King. “The name of the author is larger than the title.

Uniform font, almost like a trademark font,” she said.

Unfortunately, Jurilla said the Philippines does not have “much of a rich history of book covers.” While custom-binding was available in the country, only a few people could afford it.

“Since the 20th century, and this was the period when our book trade grew into an industry, publishing in paperback has been the norm,” she said, adding that it was more practical since paperbacks were cheaper to make.

Like the rest of the world, the larger chunk of the book industry in the Philippines is focused on textbooks. Meanwhile, literary titles have very low print runs – about 500 to 1,000 copies on the first run and no second or third printing.

“Not much of an impact on a country of 90 million people,” Jurilla pointed out.

“Nevertheless we do have iconic book covers, which should tell important and interesting stories about our history,” she said.

These include textbooks, which normally do not have remarkable cover art.

“Textbooks don’t need much promotion compared to trade books. They don’t need to compete in the shelves to get the attention of the buyer,” Jurilla explained. “A textbook is assigned to you. You buy it crappy cover or not,” she told an amused crowd.

“Florante at Laura,” for example, started out with book covers displaying an artist rendition of Balagtas’ face.

“And this was a time when he was a figure hailed and used for nationalist purposes as the greatest Tagalog poet,” she said. “Florante at Laura has been propped as a kind of the advancement in the beauty of Tagalog literature.”

Later covers, however, showed Florante tied to a tree. “This resonated with the idea of the book as an allegory of the Philippines’ struggles against Spain,” Jurilla said.

While the “Florante at Laura” book covers have changed over time, the last ones incorporating modern graphics to suit the taste of the younger generation, other classic books such as “Noli Me Tangere” by Jose Rizal and “History of the Filipino People” by Teodoro Agoncillo had more of a “continuity.”

Rizal’s manuscript design, for example, has repeatedly been featured in the covers of “Noli Me Tangere.” Many of the later book covers either incorporated the whole design as background or featured some of the elements – such as Maria Clara’s silhouette or Padre Damaso’s feet, Jurillo showed.

On the other hand, Agoncillo was able to exercise “authorial control” over the cover design of the “History of the Filipino People.” In fact, the design created by famous illustrator and painter Malang was the same one used in the last several decades.

According to Jurilla, Agoncillo specified in his contract that the book cover should more or less look the same in the later editions. And it did, except for a couple of color changes.

“It is interesting to me when the art and book world do come together when you talk about cover design,” Jurilla said.

Like in other parts of the world, a handful of famous Filipino artists had their start in the publishing industry. Jurilla pointed out that even Fernando Amorsolo, who is an important figure in the history of Filipino art, did line drawings for early Philippine school books.

“[The] primary purpose (of book covers) is for protection. It’s always been that. But it has also become a work of art, become more and more a marketing tool,” Jurilla said.

Jurilla is an associate professor at the UP Department of English and Comparative Literature. She obtained her PhD on Philippine book history from the University of London’s School of Oriental and African Studies.