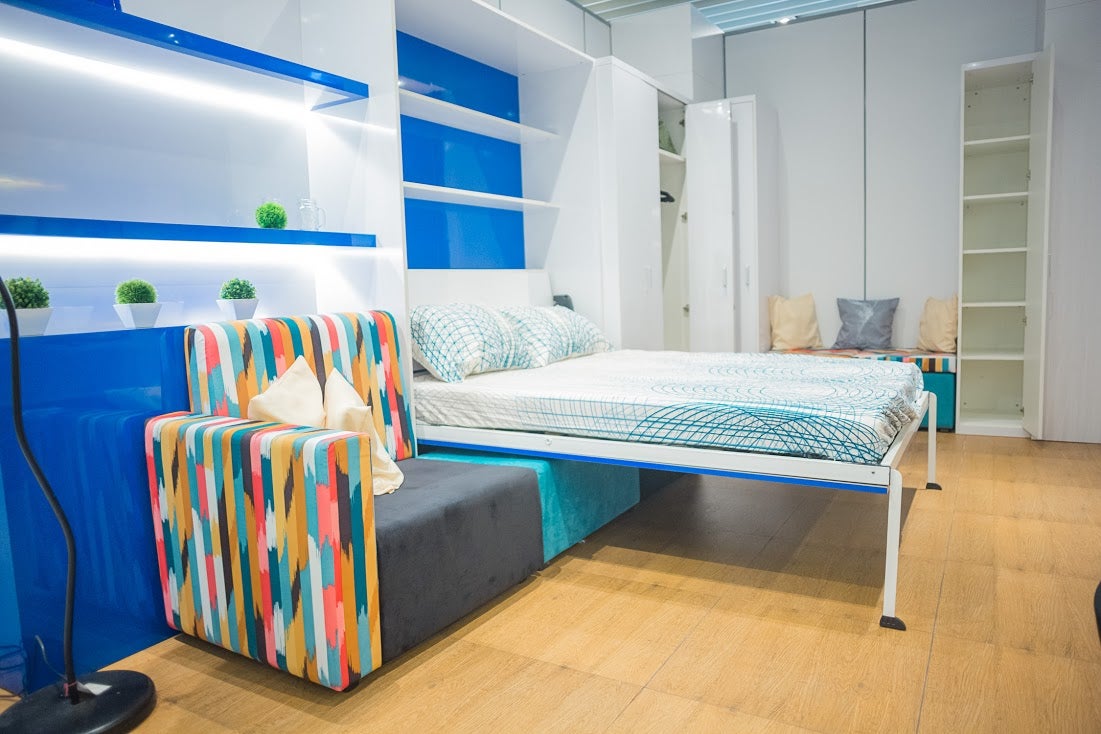 The good news for those who live in cramped condo spaces is that they can now expand, for instance, a 22-square- meter studio unit by as much as three times.

Turn the living room into a kitchen and, later, a bedroom, depending on one’s needs and time of day, with ErgoHome’s “multifunction” furniture pieces.

Even a tight one-bedroom condo unit can benefit from the multifunctional and space-saving solutions the company provides—from modular sofas and multipurpose tables to Murphy beds and kitchen counters that can be tucked away behind a series of shelves and compartments.

Shelving units are either made of medium-density fiberboards or particleboards. Those made with melamine have built-in colors mostly in neutral shades. Customers who want brighter, more unusual colors can opt for laminated wood.

Sofa beds and Murphy beds carried by certain competitors don’t even come close to what ErgoHome offers, according to Philip Ng, the company’s president and CEO. “We provide today’s urban dwellers with a total solution,” he said. “We design, custom-build and install space-saving furniture pieces based on the unit’s layout and what customers want.”

ErgoHome has a team of interior designers and builders to attend to clients. Once it turns over a condo unit to a customer in three to four weeks’ time, the space is already livable. With the right accent pieces, the unit acquires a personal touch.

“We will design for free,” said Ng. “If you order basic colors like white, black and beachwood, we can actually deliver the unit in two weeks.”

Some people find ErgoHome’s packages a tad expensive. Ng thinks otherwise. Again, depending on what customers need and their budget, the company offers packages for as low as P100,000.

Those short on money don’t even have to buy the entire setup in one blow; they can do it over a period of one to two years.

“Like ordinary furniture pieces, you can buy our multifunction furniture piece by piece,” said Ng. “Because we designed and made them, we would know how to fit and match pieces even if you didn’t buy them all at the same time.”

And what’s a six-digit investment when you already paid, say, P2.2 million for your condo unit? Since Ng and his team can virtually triple your space, it’s like buying three condo units for the price of one, he said.

“You’d end up saving P4 million, and that’s a lot. What’s more, by freeing up and maximizing the use of tight spaces, we can improve your quality of life. If you don’t have the right furniture, condo living can become difficult and uncomfortable.”

ErgoHome’s three-dimensional “walk-through” software gives a clear idea on how the entire setup looks through a computer screen.

Ng, a native of Malaysia, has been living in the Philippines for the past 40 years. He is married to a Filipino woman and speaks the language.

He set up ErgoOffice almost three decades ago. As condo living became popular, he saw an opportunity to expand the company’s product line by diversifying into multifunction furniture.

“Condo developers are also talking to us. Some of them find it difficult to sell their units because they’re too small,” said Ng. “They go to us to give the public an idea on what could be done with such limited spaces.”

Its SM Aura branch, meanwhile, is scheduled to open this month.