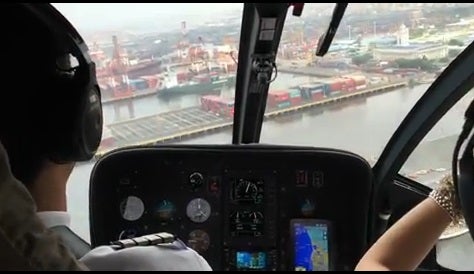 There is a new way to explore the natural beauty of the Philippines–through a majestic helicopter ride.

READ: PH tourism ‘the next big thing in Asian travel’

“We created tours to Corregidor, Banaue Rice Terraces, Mount Pinatubo (because) our objective is to show to the outside world that when you come to the Philippines, you can have an incredible experience,” he said.

Some tour packages are already complete such as the Corregidor Land Tour which includes the helicopter trip to and from the island and a three-hour land tour with guide and jeepney ride.

Up to six people can be included in each tour through PhilJets’ Airbus EC130 T2 helicopters that have just been imported into the country from France. Members of the media were given a free aerial tour around the Manila Bay area.

The convenience, luxury, and spectacular aerial vistas of a helicopter tour, however, do not come cheap. The most affordable tour, a 30-minute fly around the Manila and Makati cities, costs around P57,000.

The Philippines is ready

Asked if the Philippine market was ready for such expensive aerial tour offerings, Tea said that they are optimistic.

“We believe that the Philippines is in a very good position with strong growth in the last four to five years, better governance, and a better image worldwide. We strongly believe we can change the image of the Philippines, and we just want to contribute our share to show (the world) that its more fun in the Philippines,” he said.

Tea mentioned that helicopter tours are very popular in many countries all over the world. He cited examples such as aerial tours around Paris city, Islands of Hawaii, Las Vegas, Grand Canyon, etc.

“We believe we can do the same in the Philippines … [which has] really, really great sceneries,” Tea added.

Presently, all tours fly from the PhilJets’ hangar along domestic road, Pasay city. But Geoffroy Cahen, Sales Manager for Aircrafts Sales and Services, said that they are working on establishing hubs in Cebu, Davao and one in northern Luzon.

While the cost of tours right now might be too expensive for the mass market, Cahen said that with more and more customers, they will be able to lower their prices.

Their smaller helicopters, which have a maximum capacity of three passengers, are also available for cheaper charter helicopter services.

IN THE KNOW: Philippines, spelunkers’ delight