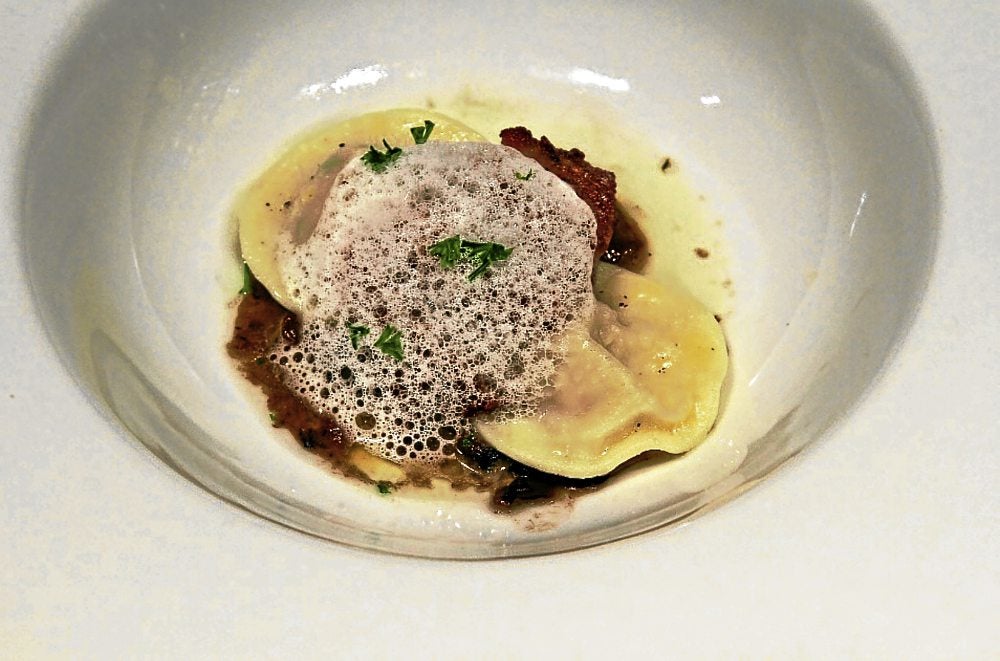 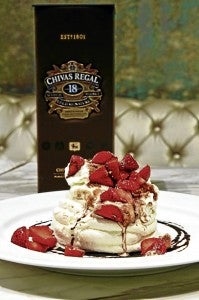 At 6 feet 3, standing against the plush and opulent interiors of the 600-sq m restaurant and lounge Opus, chef Carlo Miguel’s massive presence is undeniable. As his personality is big and bold, so are his dishes.

“My food stays true to who I am. My personality comes out,” says Miguel.

As a chef who’s known for creating dishes with flavors that are easily identifiable and yet can be distinctly and uniquely combined, he says, “I think that’s what’s made me successful in the Philippines. I’ve always been a chef who seasons highly.”

Although many Filipinos have been used to food with a lot of MSG, here’s a chef who doesn’t use MSG at all, but has diners not reaching for the salt as well.

“The flavors are not subtle so you know what you’re having, but at the same time they’re all harmoniously balanced,” he says.

Miguel has more than 15 years of culinary experience. He’s had stints at famous Sydney restaurants—Salt, Lothar’s, Vault and Two Chefs on Stanley—and the award-winning Philippine restaurants Sala and Sala Bistro. His latest restaurant is Draft.

It’s a wonder how he can keep reinventing his dishes and whipping up new ones.

His current penchant is for modern European cuisine with a touch of molecular gastronomy (a discipline, practiced by  scientists and food professionals, that studies the physical and chemical processes that occur while food is cooked).

His expertise also lies in sous-vide cooking, a cooking process in which food is encased in an airtight plastic bag and cooked for a very long period of time (days or even weeks), at an accurately determined temperature much lower than usual.

“No one’s really done molecular gastronomy in the same level I’m doing it here, and I also do a lot of stabilized foams,” he says.

Though he sometimes takes cues from his travels and from the books and menus of other chefs, Miguel says, “I like to see their thought processes and how they combine things. Then I sort of adapt it to my cooking, because the last thing you want to hear is somebody saying ‘I saw someone else do this.’”

He adds, “I’m always moving forward, so I’m not doing the same dish I did 10 years ago.”

It’s this knack for incessantly concocting new dishes and fresh ideas—evident in his resto’s menu modifications every three to four months—that has led to some signature dishes, such as sous-vide aged US Angus beef short rib with horseradish potato puree, roast shallots and marsala jus.

“It’s aged in-house for three weeks, vacuum-sealed and then cooked in an immersion circulator for 48 hours,” he explains. “Normally, a chef would braise it so it’s well done, gray and falling apart. This one’s still medium rare, and short ribs have much more flavor than just the regular steak.”

Other signature dishes include the grilled Japanese eel and sautéed foie gras with pickled radish salad and cucumber jelly, and the quail and bacon ravioli with roast quail breast, mushrooms, leeks and truffle foam. 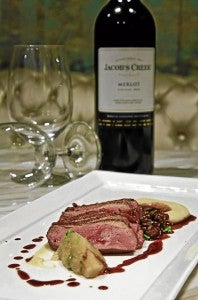 Using molecular gastronomy, he was able to turn the juice of the pickled radish into faux caviar pearls—a visual and tasty treat. The cool cucumber jelly was a welcome complement to the full-flavored eel and seared foie gras with its “crisp exterior and velvety interior.”

The desserts were labeled with names of famed artists: “Matisse” is a dark-chocolate fondant with salty caramel ice cream and malt foam; “Monet,” balsamic marinated strawberry and vanilla pavlova; “Gauguin,” white chocolate-amaretti cheesecake and macerated raspberries. The strawberry and vanilla pavlova was light as a whisper on the outside and soft and chewy within. The sweetness of the meringue was perfectly offset by the raspberries’ tart flavor.

“I’ve always been a chef who puts bold flavors together, but balances everything well,” says Miguel. “Everything should go together for a reason.”

He pulls off a fine balancing act with the pumpkin and sage soup with bacon and parmesan ice cream, which gives a refreshing hot and cold combination that fuses the savory ice cream with the piquant soup. Another plus is, unlike most ice creams, this has no sugar and chemical stabilizers, so it doesn’t turn solid when churned.

When it comes to handling his kitchen staff, “I have a rule: No phones in the kitchen. If I see it, I’m putting it in the deep-frying pan, which I’ve done twice. 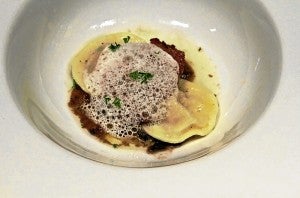 “Those who are well-trusted have been with me for years,” he adds. “Those who work in my kitchen should have their undivided attention on my food and should be passionate and hardworking.”

He has a core group, which is split up every time he opens a new restaurant. At present, “We’re working on a Spanish concept. All I can say is, it’ll be at The Fort, in a new mall that’s being constructed right now.”

To open by December, his new restaurant will be a “modern-style tapas and wine bar, which will hopefully have a wood-fire oven and will offer Catalonian flat bread and pizzas with more Spanish toppings than Italian toppings.”

Miguel says his eating habits since his stint in the TV show “Biggest Loser Asia” have changed. Though he has shifted to exercising at least five days a week and eating healthy—century tuna, egg-white omelette and two pieces of whole wheat bread for breakfast and three grilled chicken breasts at work—he’s quick to say he has no plans of opening a health-conscious restaurant soon.

“Right now, I have a young family and my daughter’s 14 months old, so I need to make money. Unfortunately, health-conscious restaurants aren’t good moneymakers,” he says. “It would be great though, so maybe I’d do it when I’ve got about 10 restaurants.” 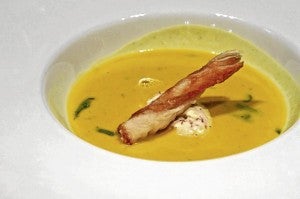 He adds, “I think, with the brunch menu, at least, there’s definitely something here for people who are looking after their health. Then there are about 10 other great fatty dishes. There has to be.”

“I have pretty much decided that if I gain a little weight, so what. I know what to do to lose it again and to make sure I keep myself healthy,” he says.

This determination, coupled with the lessons he’s learned along the way, allows him to continuously create remarkable dishes.

“It’s more about experiences. Usually, when you eat a dish, it brings you some kind of memory. That’s what I try to do because food is a little bit more than meets the eye.”