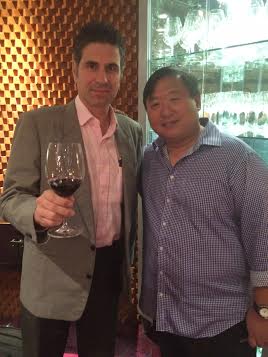 Why pairing wine with the right wine glass matters

To fully  enjoy a glass of wine, from the aroma and texture, down to the flavor and finish—pairing it with the right glass or stemware matters a lot.

And no matter how good a particular vintage is, pouring wine in a paper cup, like most people do in supermarkets and beach parties, will greatly diminish its taste and aroma. You’re probably better off drinking cheap wine coolers.

Frantz Dumey, vice president for Asia of Austrian wine glass company Riedel, demonstrated the intricacies to a group of journalists in a recent wine-tasting event at Elbert’s Steak Room in Makati. (Elbert’s is one of only two restaurants in the world with a Riedel Room.)

Riedel has been producing mouth- and machine-blown wine glasses since 1756. It began developing “grape varietal-specific” stemware in the 1950s with some of the world’s leading winemakers.

The demo featured four different types of Vitis wine glasses (a line of Riedel stemware exclusively distributed locally by Bacchus Épicerie) and a “joker,” or a generic wine glass that some restaurants use to serve various types of wine.

There’s no such thing as a one-size-fits-all wine glass, as its shape, size and rim diameter can either bring out or obscure, and even ruin, the taste and aroma of the best vintages, said Dumey.

Even white wines like chardonnay and sauvignon blanc, and red wines like pinot noir, cabernet and shiraz have their distinct characteristics, and are thus best enjoyed in their specific grape-varietal stemware. How come?

“Because the wine glass’ shape, size and rim diameter will determine how a specific wine is delivered to your nose and palate,” said Dumey.

Even similarly shaped glasses like those meant for chardonnay and pinot noir can’t be interchanged. Since the former is 2 millimeters shorter than the latter, its curve and rim diameter are a tad different.

“It may look similar and good enough to drink your red wine in, but the chardonnay glass is in fact the enemy of red wine,” said Dumey.

True enough, when he asked us to pour a delicate, nonacidic and silky red wine like pinot noir into an empty chardonnay glass, the wine instantly smelled aggressive.

The chardonnay glass not only failed to capture the pinot noir’s real essence, it completely altered its character because it has a shorter bowl and wider rim than the pinot noir glass.

“Apart from taste, the aroma is also important because more than 70 percent of taste sensation comes from your nose,” said Dumey.

There’s a reason sommeliers and bon vivants do it. Swirling a glass of wine as you imbibe its aroma is important because it’s a way of preparing the palate for what’s coming.

How a food or drink smells will often give you an idea of how it tastes (notable exceptions are blue cheese, durian and chou tofu). But that’s only half the story.

As a wine connoisseur, Dumey considered pinot noir one of his least favorites. He didn’t know why until he had an epiphany after tasting the red wine much later in the right glass.

Pinot noir was able to redeem itself. All the while, Dumey was drinking it from the wrong wine glasses, which partly explained why he didn’t enjoy it.

White wine like sauvignon blanc is also able to keep its fresh, crispy and citrusy characteristics in the right glass (sauvignon blanc and Riesling can be had from the same wine glass).

But once we poured it into our joker glasses, or what many restaurateurs and wine drinkers commonly call white wine glasses, the sauvignon blanc’s aroma instantly turned earthy.

The same applies to a glass of chardonnay. Depending on where the grapes come from, in the right glass, chardonnay emits a round, oaky and buttery smell.

These characteristics were supplanted by an earthy, more aggressive aroma once we poured the chardonnay into an empty wine glass meant for sauvignon blanc.

It also lost its buttery and apple-like flavor, and instead tasted flat and watery. And to think both chardonnay and sauvignon blanc are white wines.

Pouring the chardonnay into the joker glass further ruined it. From flat and watery, its taste turned bitter.

“The taste now comes from the back of the mouth, which is a total distortion,” said Dumey, referring to the chardonnay-and-joker pairing. “It’s not the same sensation we got from glass No. 2 (chardonnay glass).”

Why is that? A wine glass’ size, shape and rim diameter are designed not only to position your lips and tongue when drinking wine, they’re also responsible for the way you tilt your head to allow wine to flow into your palate.

“The shape of the wine glass would eventually direct the wine into certain parts of your palate,” said Dumey.

If the shape is right, the wine glass would bring out the wine’s best characteristics. If you use the wrong glass on a certain grape varietal, you won’t be able to “touch” the palate that should be touched, Dumey added.

Businessman and leading wine merchant Alex Lichaytoo, one of the owners of Bacchus, has his own take on the one-on-one pairing. He liked the fact that Riedel glasses, regardless of line, are individually laser-cut.

“Thus, a very thin amount of glass touches the mouth. And the less glass in the mouth, the better,” he said.

Add that thin quality to all the other factors mentioned, the wine would fall on the right part of the tongue where its best qualities would be emphasized and its flavor maximized.