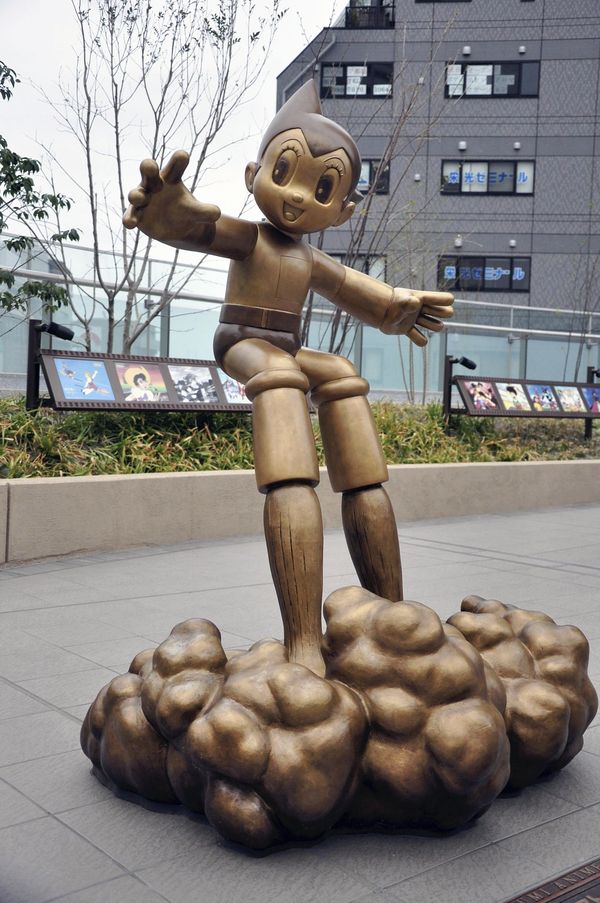 Five bronze statues of characters from popular animated films, including Tetsuro Hoshino and Maetel from “Galaxy Express 999,” have made their appearance on a pedestrian deck of the north exit of Oizumi Gakuen Station on the Seibu-Ikebukuro Line in Nerima Ward, Tokyo. The statues were installed by the ward government to promote the ward as an animation center.

The statues are all exactly life-sized, as based on depictions in their anime.

The other three characters are Atom from “Mighty Atom” (Astro Boy), Joe Yabuki from “Ashita no Joe” (Tomorrow’s Joe) and Lum from “Urusei Yatsura.” All of the characters appear in manga or anime produced by cartoonists or production companies in the ward. Accompanying the statues, a plate chronologically listing anime works made in the ward from 1958 to 2004 was also installed.

The total project cost was about ¥100 million.

Nerima Ward is known as the birthplace of Japanese anime as the companies that produced Japan’s first color feature-length animated movie “Hakujaden” (1958) and the first serial TV animation “Mighty Atom” (1963) have been located in the ward. About 90 animation-related companies are clustered in the ward even today.

Yuka Fujii, 29, a company employee who visited the site with her husband, said happily: “I was looking forward to the completion. I’m delighted that the ward really looks like an animation center. I’d like to invite my friends here.

Japanese actors arrive in Manila for premiere of anime-inspired film