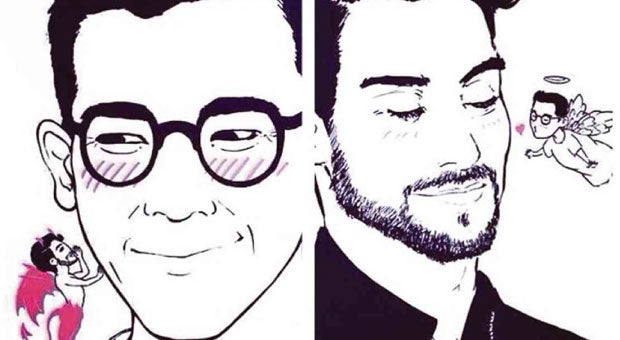 Meet Conrad Ricamora, the actor behind one of TV’s hottest characters

Oliver Hampton is an IT expert that main character Connor Walsh (played by Jack Falahee) has to seduce for information. The twosome’s chemistry is off-the-charts, and their love scenes are one of the hottest we’ve seen on network TV.

We started getting invested in the “Coliver” romance, even though Connor had major commitment issues. After the finale, we needed to see if the actor who played Oliver has given any interviews yet or mentioned that he would be back next season. (If you’re a TV nut, you know about the compulsion to check if your favorite character won’t be killed off.)

Imagine our surprise when the actor playing Oliver was named Conrad Ricamora. With that surname, the dude must be Filipino, or at least part-Pinoy. We were right.

Ricamora is Filipino-American, born and raised in the United States, with a number of theater credits. He played Ninoy Aquino in David Byrne and Fatboy Slim’s rock musical, “Here Lies Love,” which earned rave reviews from The New York Times, Vogue, The Hollywood Reporter, Variety and more.

In this interview, Ricamora talked about portraying Ninoy, how he ended up playing Oliver on TV’s hottest fall freshman drama and how his life has changed since.

You were born and raised in the United States, and you’ve mentioned in interviews that you didn’t know much about your Filipino heritage. Has that changed after “Here Lies Love”?

Yeah! It changed tremendously. First of all, in preparing for “Here Lies Love,” I researched the history of the Philippines and the political landscape of the country. I learned how beautifully complicated the Philippines is—so diverse but unified in its own way. And also, my dad (who was born in the Philippines) was a huge fan of the show, and that started him talking to me about his past and experiences in the country, and with his own history, which he had never done before.

Do you still have family here? Have you visited the Philippines or do you have plans?

Yes! I want to visit the Philippines very badly. I have to find a break in my schedule from shooting HTGAWM, and also now I’m in “The King and I” on Broadway with Ken Watanabe, so I won’t have time for a vacation for a while… But yes, definitely I want to visit.

How did you research for your role in “Here Lies Love”?

I watched every video of Ninoy—or about Ninoy—that I could possibly get my hands on. He was such a great speaker, I would say, up there with Martin Luther King Jr. and President Obama. I really studied Ninoy’s body language and the way he used his hands when he talked—he was a very expressive guy! Also, I got a copy of his letters from his time in prison and that was extremely helpful. His political ideas and theories would have changed the world if he had lived to develop them in the direction he was starting to go. I really believe that.

How did you land the role of Oliver in HTGAWM?

They called me in to audition for Oliver after I had auditioned for the role of Wes. I auditioned only one time for Oliver, and that was it. Which is weird, because usually you have to go through several rounds … for different producers and directors and writers before you secure a part.

Did you watch other Shonda shows before auditioning for the role?

Oh yeah. I’m a fan of “Grey’s Anatomy” and “Scandal.” I also think it’s essential to check out her shows if you are auditioning for one of her projects. They are very different, but there is a similar writing style that you can start to pick up on … very quick, sexy writing! Haha, but that was helpful to get a handle on before starting HTGAWM.

What do you love most about playing Oliver?

I love that he is so open and loving and forgiving. With all of the scheming that is going on, Oliver is honest.

You’ve become one of the show’s fan favorites. Did you expect such a strong reaction from them?

I didn’t know what to expect! But one of the things that I’m happy to do pretty well is to just focus on the work and not worry about anyone’s reaction to my work. I get a script, figure out the circumstances and the character, and then just show up and let the camera capture whatever happens between me and the other actor. I like working that way. It takes a lot of pressure off. But I’m thrilled that Oliver has found a connection with audiences and that people can relate to him.

I just think about who Oliver is and what he wants from Connor, and then let all the rest happen in the moment… I will say that one of the things I love about shooting this show, with all the different directors we have, is that they always let us follow our instincts and move around the set however we want. And sometimes they will give us little adjustments, but in rehearsal, they will just let us go.

Were you nervous the first time you filmed your love scenes, knowing how groundbreaking it is on network TV?

I didn’t think about how it would be received; I was just doing my job.

What’s the most challenging thing about playing Oliver?

Trying to find a way to connect with Connor when he keeps putting up walls. Oliver was burned so badly by Connor in their relationship, but he also loves him SO much. That’s a hard place to visit when shooting these scenes—trying to learn how to trust someone that you love so much, even after they have betrayed you so badly. Maybe that’s why people connect with Oliver. They can relate to his being hurt and still wanting to learn how to love again.

What’s the most fun part about being on the HTGAWM set?

The people! From the cast to the crew—writers, makeup and hair, directors—these are seriously AWESOME people! I love them so much.

You mentioned that scripts aren’t passed out in advance. Did you ever try to wheedle out from the writers whodunit?

Were you shocked when you found out who killed Lila, or was your guess right all along?

I was shocked! I really thought it was Sam!

What do you love most about Shonda Rhimes?

I love the way she moves through life, staying true to who she is. Her actions and her words fully represent her. She is a force.

What’s in store for Oliver and Connor, especially after that big story development?

Man, if I knew, do you think I’d tell you in this interview?! Haha!

You mentioned that you were told about Oliver’s fate only a few days before. How did they tell you, and how did you react?

I was with Jack in the makeup trailer, and he started talking about it because he just heard, and I yelled, “What?!” And then I stood there frozen and staring into space. I felt like I had found out something tragic about my best friend.

Your character has resonated among a lot of gay men all over the world. Does this affect how you portray Oliver?

I love that people connect with Oliver, but no, I don’t think about how anyone will react to what I’m doing with my work. I just let whatever happens happen.

Have you been getting recognized now more than ever? How do you deal with it? What has been your funniest experience with a fan so far?

Yeah, that’s been fun and exciting because people love the show and Oliver so much! On the subway in NYC or in restaurants, people will come up and express their love, and that’s always nice. I’ll say the most interesting experience so far has been to find out that Oliver and Connor’s story line has a huge following among straight women! Two women fans that I met in a restaurant recently said that they love following “Coliver” because there is an equal status and intellect given to the characters that they don’t see in TV relationships between a woman and a man! I just think that is really cool that they have found a fanbase there.

If you had a say, what would you want to happen to Oliver and “Coliver”?

Oh, I don’t know! I could see it being interesting in many different ways. I’m a sucker for romantic comedies though, so…

What are you working on while waiting for Season 2?

I’m doing the “King and I” on Broadway with Ken Watanabe and Kelli O’Hara right now! It’s such a gorgeous show.

What can fans expect from the next season?

More amazing twists and more reveals about who all these characters are, and just … Viola (Davis)… Damn… She’s awesome!

Follow Conrad Ricamora on Twitter/Instagram: @conradricamora. “How to Get Away with Murder” is being shown in the Philippines on cable TV through Sony Channel Asia.