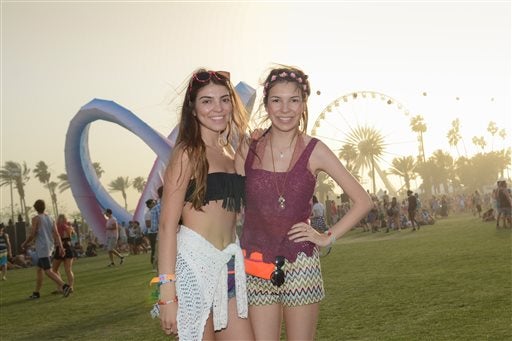 In this April 12, 2014 file photo, concertgoers pose for a photo at the 2014 Coachella Music and Arts Festival in Indio, Calif. The Coachella Valley Music and Arts Festival, held in the Southern California desert on two consecutive weekends beginning Friday, April 10, 2015, is a style destination as much as a musical one - this year more than ever. AP

Fashion aims to share the spotlight with music at Coachella

LOS ANGELES — “Festival fashion” is a thing, and Coachella is the place.

The Coachella Valley Music and Arts Festival, held in the Southern California desert on two consecutive weekends beginning Friday, is a style destination as much as a musical one — this year more than ever. Besides the ever-growing array of off-site parties and sponsored suites, there are now runway shows and a pop-up fashion store on festival grounds.

So what is the Coachella look? Think hippie meets hipster: lots of fringe and crochet, with a requisite floral headband or floppy sun hat. Just google “Vanessa Hudgens Coachella.”

And it goes way beyond the festival, which started humbly in the grunge days of 1999. Because the event comes so early in the spring, when much of the country is still defrosting from winter, “festival fashion” informs spring, summer and resort styles.

Fashionistas say a convergence of cool elements make Coachella a haute spot: It boasts an eclectic lineup of musicians (AC/DC, Jack White and Drake are headliners this year); its proximity to Los Angeles means a high celebrity quotient; and its audience is plugged into Instagram, so images of the festival and its fashion span the world in real time.

“Social media has had a huge influence on everyone getting involved,” said Lisa Sugar, founder of lifestyle site POPSUGAR.com, which is hosting three days of fashion events in nearby Palm Springs, California. Brands are seizing the opportunity to be part of the Coachella conversation and see the festival as a place to connect directly with young consumers, she said.

“Millennials love experiences, and Coachella is just one great, big party. It’s a huge experience for this audience to really get excited about,” Sugar said. “They plan for days what they’ll be wearing… So if a brand can offer them something organic, they’re engaged.”

Among the brands getting in on the action: Pandora Jewelry, which is hosting a three-day “Fashion Experience” of runway shows by designers Tracy Reese, Nanette Lepore, WHiT and Siwy Denim. Other fashion and accessories companies are offering new designs aimed at festival-goers. For Love and Lemons, a maker of high-end clothing and lingerie, collaborated with jewelry designer Jackie Aiche on a capsule collection for Coachella: Sheer, lace and floral pieces to pair with specially created jewelry pieces that sell for $275 to $2,625.

“Coachella has almost become fashion week for people in California and LA,” said Kari Feinstein, a publicist sponsoring a “style lounge” in Los Angeles this week to connect brands with festival-bound celebrities. “It’s become sort of an outdoor runway, but not for high fashion. It’s more for lifestyle-driven brands.”

The Council of Fashion Designers of America is adding the festival to its calendar for the first time this year. CFDA chief Steven Kolb said Coachella shapes today’s fashion much like the Woodstock festival did in the early 1970s.

“It’s the curation of artists and diversity of music that worked,” he said. “That’s always been true with music and fashion. Music has always influenced fashion and vice versa… So for our industry to harness that was just a natural evolution.”

The festival has even inspired its own namesake clothing line: H&M introduced its sunny H&M Loves Coachella collection worldwide last month. The Swedish retailer, a Coachella sponsor for the past six years, will host an interactive installation on the festival grounds this year that includes a “360-degree Selfie Station” and a temporary store selling exclusive, festival-only products.

“We always thought that Coachella is as much about fashion as it is about music,” said H&M spokeswoman Marybeth Schmitt. The collection is available at 3,000 H&M stores around the world, she said.

General admission tickets to the festival cost $375 and VIP passes sold for $899. All are sold out.