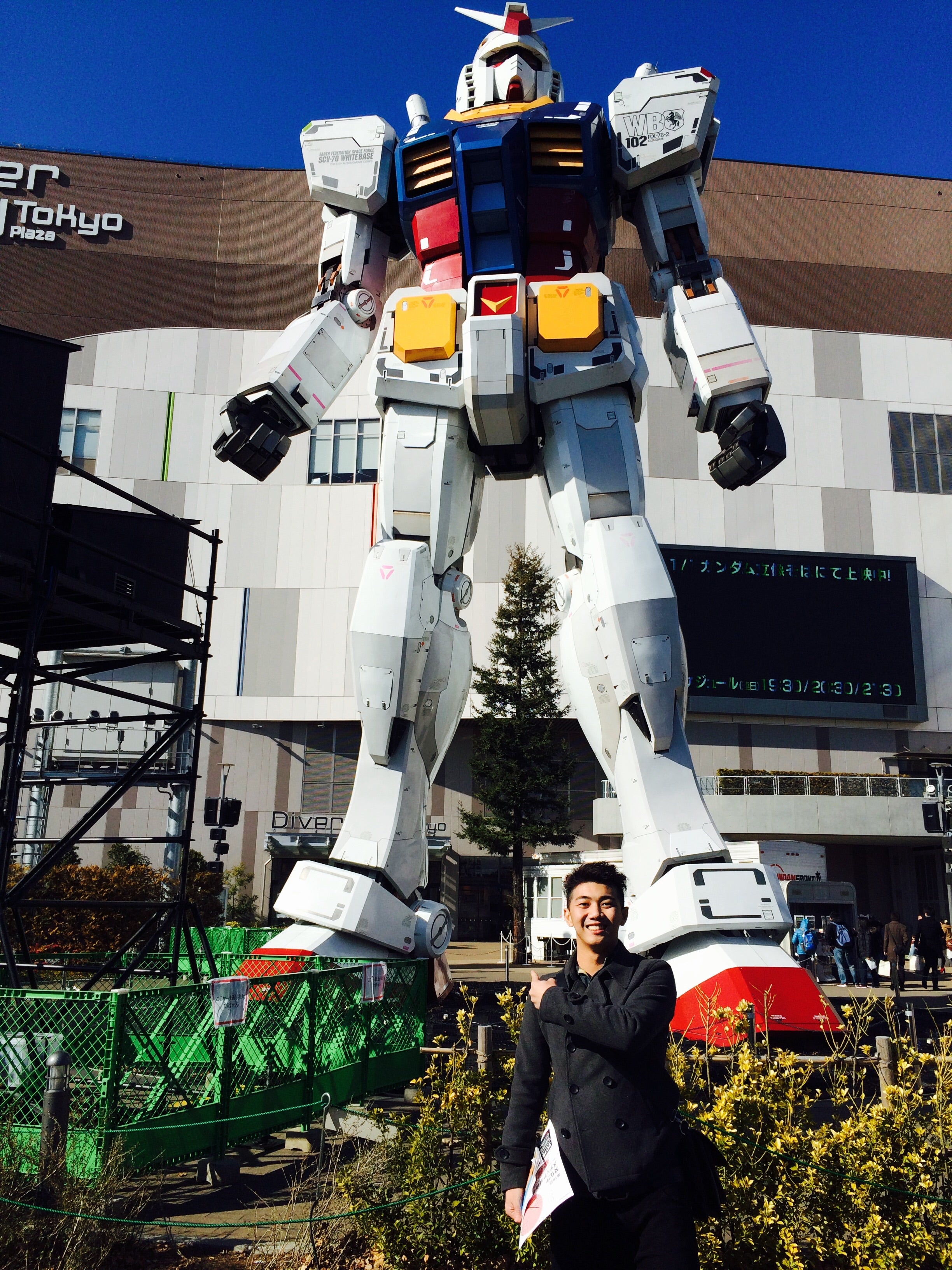 THE AUTHOR posing with the giant Gundam in Odaiba

From fresh college graduate to OFW in Japan

I T WAS Jan. 19; the road leading to the bus station was covered with snow, and the gloomy skies reflected my feelings. That was the moment I had to say goodbye to my mom to try my luck working in one of the world’s top cities, Tokyo.

My parents separated when I was 6 years old. Mom sent me to private school and on to college in Iloilo where I earned my bachelor’s degree. To give us a comfortable life, mom had to work as an entertainer in Japan. Unlike other students who graduated with flying colors, I was the only one in class who didn’t make it to the list of March 2014 graduates.

The feeling was so horrible, especially when I was imagining what my classmates were doing hours before the commencement exercises, like preparing their togas. I remembered how tough it was when I was doing my thesis. Despite my efforts, my mentors chided me that I would not make it to March 2014.

I just told myself that the glory of graduation belongs not only to those who made it on time but also to those fighting to graduate against all odds.

After my thesis, I immediately went to Japan to work. I was blessed to land a job in a factory that produced printer ink, getting paid a sixdigit salary for operating the machines. With my savings, I planned to make a dream come true by buying myself a luxury car. Over the next months, my body became weak, and I was unhappy in my work because it was boring. I realized that I was living to work and make money, such that I had forgotten how to live.

In Japan, people in the province are richer than those in the cities like Tokyo. I used to live in the province, in Nagano prefecture, which is prosperous due to agriculture.

Also, there are only a few recreation places, so people would rather work than enjoy leisure time. I waited for my contract to end so I could try my luck in Tokyo.

People admired my guts, but I also became apprehensive because of the high standard of living. However, dreaming big also entails leaving your comfort zone. I just prepared myself since I had nothing to lose.

Thank God for the people who led me to where I am working now. I was accepted to a Michelin-star restaurant in Ginza, Tokyo, as a dishwasher.

This opened an avenue for me to be connected with other Filipinos who are breadwinners. Maybe I was destined to be in that place, to speak on behalf of overseas Filipino workers in Tokyo, to remind people that we are not human ATMs.

Our hands are covered with scabs, just so we can send money to the Philippines. It hurts being asked how much we sent, instead of how we are. Some workers skip meals just to save money for their niece’s or nephew’s allowance.

But I don’t feel like an ordinary worker here. There are times people make funny faces whenever I greet them “ohayou gozaimasu” (good morning), maybe because of my sweet-sounding Ilonggo accent.

Even my Japanese coworkers, who are younger than me, mimic the way I smile. So, even if I’m away from my family, I don’t feel so alone.

There are Filipino women in Japan who have been separated from their sons and daughters for years; most probably because they miss their children, they treat us at work as their own.

I am also grateful to Kuya Ethan for treating me like a sibling and letting me stay at his place. I remember being kicked out of my Japanese friend’s apartment because of our cultural differences. For a few hours, I experienced being homeless in a station packed with busy people just walking past me.

After moving to Tokyo, I learned that time was so precious women have acquired the skill of running in heels (some in Louboutins) to catch the train.

I have experienced what it felt to take the wrong train; but instead of worrying, I chose to enjoy the moment of being in a new place. I gave myself time to soul-search, keeping in mind the saying, “It’s OK to get lost and find yourself again.”

I also experienced what it was like to miss the last train and spend the wintry night in Shinjuku. I walked around, under the neon lights, and unknowingly found myself in the area of male and female prostitutes, and getting mistaken for one!

I sat on a stairway leading to the subway station, and a man named Cho offered me warm milk tea. A few minutes later, a black man named Sam offered his girls to keep me company on that cold night. I declined the offer since I didn’t like the idea, but what was so absurd was when he said, “God bless”!

While observing people going in and out of that place, I realized how lucky I am. When I looked at people who have to sell their bodies to live, I learned how blessed I was to have a mom who strove to send me to college, friends who lifted me up when I was down and a family waiting for me at home.

Life is a series of choices that will lead you to your fate. Paulo Coelho said that when you want something, the universe conspires to help you achieve it—the only common denominator being that we all want happiness. It is when you stop counting what you don’t have that you become truly happy.