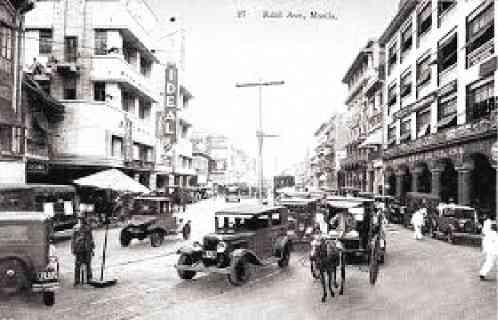 The war destroyed Ermita and left its residents destitute. One by one, the families left their snooty, Spanish-speaking district which had been their home for one hundred years of solitude, and settled down in the suburban towns or in other places in the city.

Ermita’s parish church had also been damaged beyond repair, and a new one had to be constructed. The plaza in front faced the US Embassy. Much later, markers were built in memory of my grandfather, poet-journalist Fernando Ma. Guerrero; his younger brother Dr. Manuel S. Guerrero, founder of Gota de Leche; and their nephew Leon Ma. Guerrero, the writer-diplomat.

“Can you imagine all those Guerreros confronting the American Embassy,” Anding Roces once wrote—or something along those lines.

Mercifully, the Malate church, a heritage landmark, was spared.

My widowed grandmother Remedios, my widowed mother Estrella, and a widower uncle-in-law, Antonio Zacarias, moved to Malate. My mother was very attached to my grandmother. They had spent the end of the war searching for my missing father, Tristan Ma., a doctor. His body was never found.

“No quiero separarme de mi suegra (I don’t want to leave my mother-in-law),” my mother once told one of her relatives.

We lived in a rented house on Tennessee (later Gen. Malvar) corner Mabini; the streets were named then after American states. In front of our residence was the beautifully named When It Is a Gray November in Your Soul café run by lshmael Bernal. Within walking distance were Indios Bravos and Hobbit House.

My mother would take my sister and me to the Chinese restaurants in Quiapo and Binondo, like the popular Panciteria Carvajal. She spoke Chinese, having spent some years in China, so the Chinese owners would treat her like an honored guest.

I trace my love for plays and movies to that period. The movie houses of my youth were Ideal, State, Ever, Scala, Lyric, Capitol, Avenue and Times. They were located in Santa Cruz, Avenida Rizal, Quiapo, and the Escolta, then a fashionable district. Botica Boie was the place to be seen.

We saw all those wonderful MGM musicals like “Seven Brides for Seven Brothers,” “Showboat,” “Singing in the Rain,” “The Great Caruso,” and “The Toast of New Orleans.” My favorite singing stars were Kathryn Grayson, Jane Powell and Ann Blyth. I felt that Mario Lanza shouted too much and wonder why he is remembered today, while poor Kathryn (who had a trained soprano voice), Jane and Ann are forgotten.

Grade school was spent at Ateneo de Manila on Padre Faura, Ermita, where shell-scarred buildings were reminders of the war. A low wall separated the school from the Assumption Convent. Once we heard screaming from the other side, and we climbed the wall and saw that a game, probably basketball, was in progress and the Assumptionistas were cheering their respective teams.

After classes, some students liked to play basketball. One time, the ball sailed over the low wall and landed in a flowerbed on the other side. “The nuns were so mad,” laughingly recalled one classmate decades later, during one of our reunions.

After graduation, it was on to Ateneo high school in Loyola Heights, Quezon City. But that’s another story. And another city.

The 1960s found me employed as a deskman-correspondent in the Associated Press right beside the Manila Times on Florentino Torres Street, Santa Cruz, near Chinatown, thanks to a recommendation from favorite aunt, Carmen Guerrero Nakpil.

By 1969 I had joined the Graphic, edited by Luis “Monk” Mauricio, in Port Area. I was in good company working with the likes of Ninotchka Rosca, Pete Daroy, Louie Teodoro, Tony and Jing Hidalgo, Mila Aguilar, Monina Mercado and Chato Garcellano. George Sison wrote a society column which later got him into trouble.

Martial law was imposed in 1972. We lost our jobs and our freedom. It was the end of an era and the beginning of a more sinister epoch.

But Manila remains the capital, the seat of power. She has a name that resonates, and a 400-year history. And she is the only Philippine city that is known all over the world.