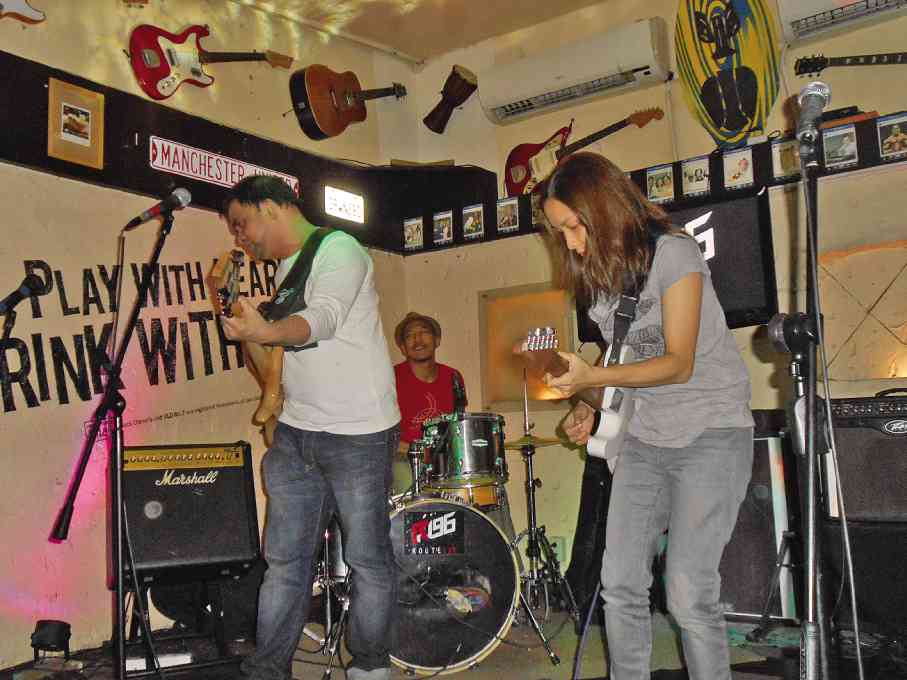 Route 196 is a small, unpretentious nightclub in Quezon City that reminds us of Club Dredd—the ’90s-era hotspot which, along with Mayric’s and ’70s Bistro, helped usher in a golden age in local music known as Filipino alternative.

Some 25 years after the Eraserheads, Yano, Teeth, Parokya ni Edgar, Color It Red and dozens of others defined that golden age, a similar Dredd vibe is felt upon entering Route 196: dark interiors, inexpensive-looking facilities, and an intimate space between stage and audience.

On the night we visit, bass player Rommel dela Cruz is celebrating his birthday. The place is filled with family and friends, mostly musicians including Rommel’s former and current bandmates.

Everybody has a rollicking time as the music flows, along with beer and pizza, till the wee hours.

12 Monkeys is packed with tough-looking guys in leather jacket and boots—members of the Harley-Davidson Owners Group Philippines Chapter who excitedly await the unveiling onstage of the Street 750, Harley’s new 750cc motorcycle.

We bump into the elusive Eric Caruncho, formerly of Sunday Inquirer Magazine and now with Inquirer Lifestyle, and Edwin Sallan of interaksyon.com; the three of us had, at different periods, written for Jingle Chordbook magazine. We are glad to be with kindred spirits, as road-trip songs blare on the speakers: Led Zeppelin, George Thorogood and the Destroyers, Deep Purple, AC/DC, Stone Temple Pilots, Lenny Kravitz, Rolling Stones—enough to set the mood for happy-hour drinking, except that Eric is content to have just water, and Edwin, iced tea, while munching on spicy chicken wings and pizza.

12 Monkeys is not known to serve exceptionally good food, much less boast impeccable service, but it features some of the country’s best bands nightly.

San Miguel Pale Pilsen is P90; the bar also has an interesting list of imported beers, wines and spirits.

Another night, we walk into Suez & Zapote art gallery to check out the TeamManila-San Miguel Pale Pilsen collaboration to celebrate the 125th anniversary of SMB’s famous beer.

The place is full of people enjoying unlimited Pale Pilsen, isaw and fish balls while listening to DJs spinning records. We recognize DJ Arbie Won, formerly with the hip hop group Urban Flow; his wide knowledge of various music genres is apparent in his short performance.

The lanterns hanging by the gate and from an old tree in the garden lend character to Oedo, a new Japanese restaurant on a lonely stretch of Sto. Domingo St. in QC.

It looks like a house that was converted into a dining place, and on this night there’s a party atmosphere with lots of people eating and talking animatedly.

The Oedo Maki (crabstick, cucumber, unagi) at P300, and the Dragon Maki (crabstick, avocado, ebi tempura, salmon tanuki, mayo) at P495, come in big servings. A friend who is treating our group orders more dishes and soon we are full.

But it’s the Asahi Beer (P100) that makes us linger for hours in the garden area, as British new wave songs play in the background. We don’t think it’s incongruous at all—good Western music and fine Oriental food a few hundred meters from the revered Sto. Domingo Church.