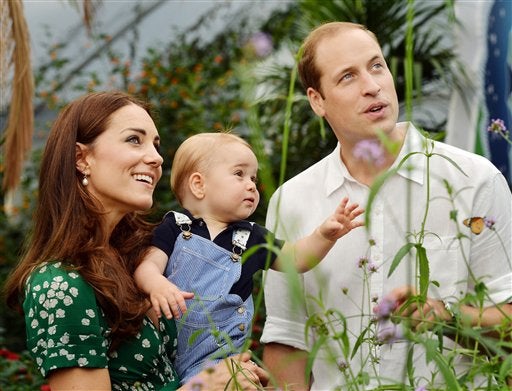 This photo taken Wednesday, July 2, 2014, and released Monday, July 21, 2014, to mark Prince George's first birthday, shows Britain's Prince William and Kate Duchess of Cambridge and the Prince during a visit to the Sensational Butterflies exhibition at the Natural History Museum, London. AP

Line of succession to the British throne

LONDON — Prince William’s second child, due later this month, will be born fourth in line to inherit the British throne, behind their first child Prince George.

Everyone below the new royal baby will move down a place, starting with William’s brother Prince Harry who will drop to fifth position.

The immediate line of succession to the throne includes Queen Elizabeth II’s four children and their offspring:

Queen Elizabeth’s descendants are followed by those of her late sister princess Margaret, her only sibling.

The monarchy’s website lists only the first 15 people in line, though some extensive counts reach around 2,000 people eligible to inherit.

Drawn up in an era of religious strife, the Act of Settlement 1701, which sets out the succession laws, states that only Protestant descendants of Sophia of Hanover, the mother of king George I, can accede to the throne.

Some counts list more than 5,700 living descendants of Sophia, including Roman Catholics who cannot inherit.

The highest person excluded on these grounds is 26-year-old Edward Windsor, Lord Downpatrick, a first cousin twice removed of the queen, who converted to Catholicism. He would otherwise be 35th in line.

A change to the succession laws which came into effect last month means males born after October 28, 2011 no longer take precedence over their older sisters.

Also people married to Catholics are no longer excluded, with Downpatrick’s father George Windsor, the Earl of St. Andrews, being restored to the line in 34th place.

The line is a vast tangle of nobility and ordinary, untitled descendants from all corners of Europe.

Several other European monarchs feature, led by King Harald V of Norway — who is in the first 100 — King Carl XVI Gustaf of Sweden and Queen Margrethe II of Denmark, who are within the first 400.

Besides Britain, it is also the line of succession to the thrones of Antigua and Barbuda, Australia, The Bahamas, Barbados, Belize, Canada, Grenada, Jamaica, New Zealand, Papua New Guinea, Saint Kitts and Nevis, Saint Lucia, Saint Vincent and the Grenadines, Solomon Islands and Tuvalu.