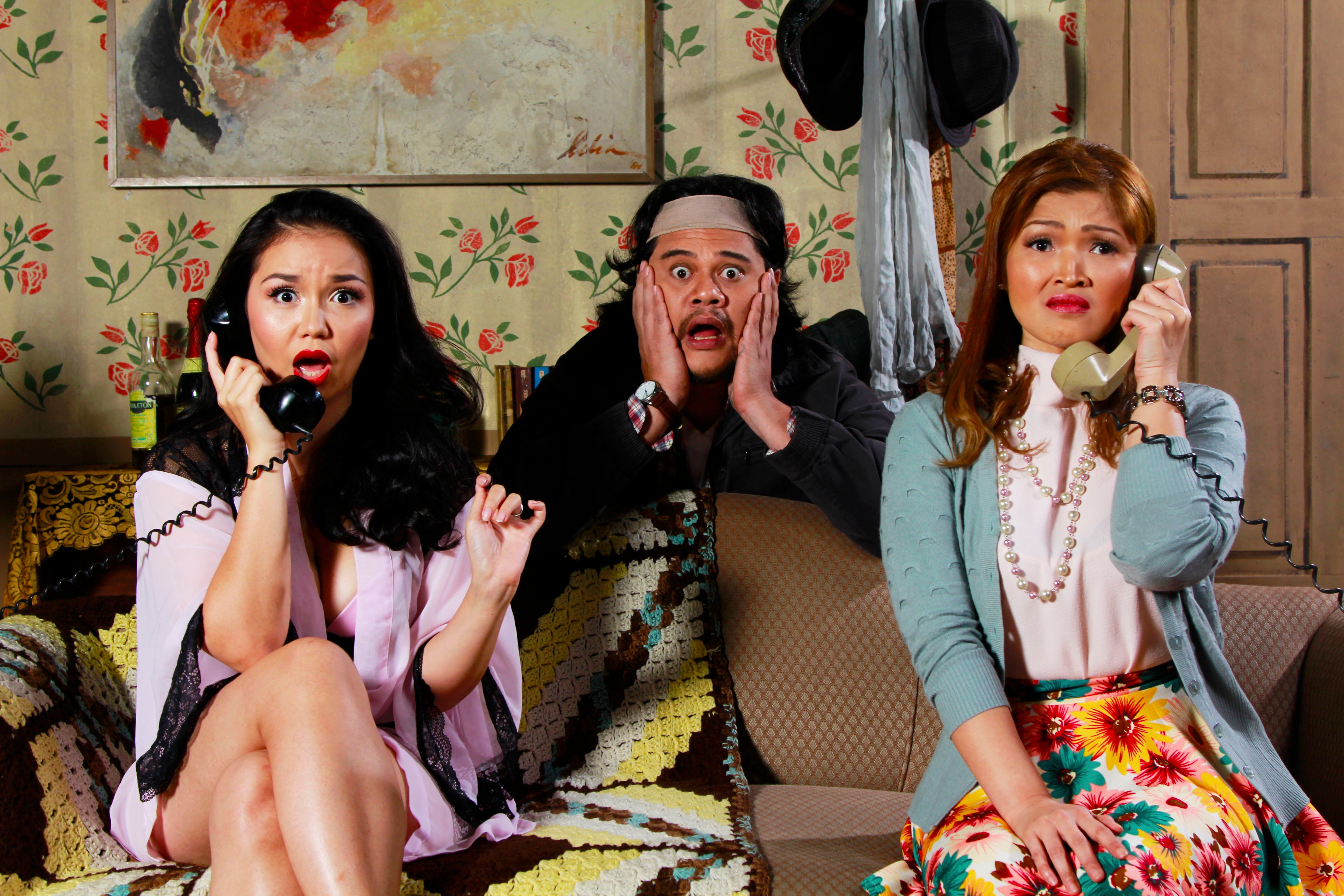 The stars of Run For Your Wife: Mikkie Bradshaw as Barbara Smith, Jamie Wilson as John Smith and Goldie Soon as Mary Smith

Repertory Philippines returns for its second show of the year, with the sexy comedy “Run For Your Wife.”

The West End hit by Ray Cooney follows John Smith, a taxi driver who secretly has two wives. The play premiered in London’s West End in 1983, and had a successful nine year run in the UK. After that, the show has been staged most notably in New York, Paris, Stockholm, and Manila.

“This is a timeless classic. Even if it’s an old play, it’s such a funny and well-written play,” shared Miguel Faustmann, who directs Rep’s third run of the show. “Ray Cooney is amazing with his comic humor. It’s just so funny.”

The play’s humor relies on the subject and a precise schedule of entrances and exits. This means pressure on theater veteran Jamie Wilson as Smith, who has to literally run across the stage throughout the entire show, with only two exits. As Faustmann described it, “timing is of crucial importance in this play.”

“John Smith is a pretty normal guy,” shared Wilson. “He just basically falls in love with two women, and sees the possibility of maintaining both of them. He loves the both of them for different reasons.”

His wives are portrayed by actresses Goldie Soon and Mikkie Bradshaw. Soon plays Mary, the motherly wife, while Bradshaw plays Barbara, the bombshell.
“She’s very prim and proper, like a proper Englishwoman,” said Soon. “She takes her duties or obligations as a wife seriously. She’s almost motherly towards John. Because she’s very proper, anything scandalous really shocks her.”

Soon reveals that the role is different to her as a person, and to prepare for the role, had to think about the woman Mary would be and slowly imbibing it. Bradshaw, on the other hand, only needed to be comfortable with her co-actors.

“I’ve been cast a lot in sexy roles, that involve very little clothing. If it’s a loud and promiscuous character, it’ll probably be given to me,” she said. “I don’t know how much preparing you could do for a role like that if it’s in you to be that vixen.”

Run For Your Wife hits Philippine theater at a time when mistresses have become a pop culture phenomenon. But while the films and teleseryes focusing on mistresses and second wives are dramatic, the play takes on a different approach: comedy.

“Despite all our conservatism, I think this kind of situation happens more than we know and more than we would like to admit,” shared Soon.

“It’s such a taboo subject here,” admitted Wilson. “But putting on a play and inviting people to watch it will shed some light and humor on what that kind of life is. With our teleserye culture, where’s the humor? There’s got to be humor there. There’s got to be some ridiculous situation that you can laugh at.”

“We’re not necessarily trying to make people think here. We’re just trying to give everyone a good time,” Bradshaw added.

During its West End run, The Daily Telegraph called it a triumph, while the New York Post promised “virtually continuous laughter.” Even Faustmann agrees. He said, “When we were reading it, we were dying of laughter. What more when you actually see it? It’s going to make your stomach hurt because of laughing too much.”

Run For Your Wife had its initial run last April 10 and will be staged until May 3 at the Onstage Theater in Greenbelt 1, Makati City. Ticket prices ranges from P400 to P600. For more details, call Repertory Philippines at      843-3570. You can also book tickets through TicketWorld at 891-9999 or visit their website at www.ticketworld.com.ph.