Meet the ‘Innovators’ who brought about the Internet age | Inquirer Lifestyle ❮ ❯ Meet the ‘Innovators’ who brought about the Internet age 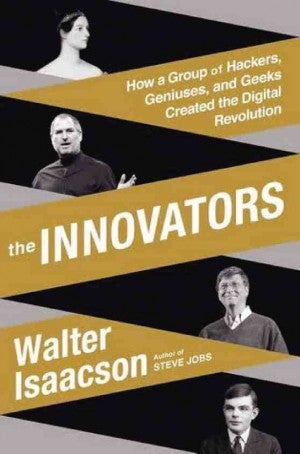 “The computer and the Internet are among the most important inventions of our era, but few people know who created them,” writes Walter Isaacson at the beginning of “The Innovators: How a Group of Hackers, Geniuses and Geeks Created the Digital Revolution” (Simon & Schuster, New York, 2014, 542 pages). Isaacson, the author of the critically acclaimed and commercially popular 2011 biography “Steve Jobs,” then sets about to follow up that thought comprehensively.

The four people on the book’s cover present only a fraction of the personages who minted this digital age: Ada Lovelace, Steve Jobs, Bill Gates and Alan Turing. But the key to appreciating “The Innovators” is to see those four individuals as a group, working together across time, instead of separately and on their own. “The tale of their teamwork is important because we don’t often focus on how central that skill is to innovation,” Isaacson says.

Isaacson ambitiously sets out to write what is essentially a biography of the digital era, beginning in the 19th century, with Lady Ada Lovelace and Charles Babbage, all the way to 2013, when the New York Times reports that the next approach to computing will be based on the biological nervous system. In the process, Isaacson effectively includes everyone and everything that had to do with the birth of the very idea of computing all the way to the rise of the World Wide Web.

This means that “The Innovators” is a very dense book. Isaacson has always had a dry, smart way of writing and here it is solidified by a remarkable amount of research. Nobody can even leaf through “The Innovators” and say Isaacson didn’t do his research.

The most compelling thing about “The Innovators” is the story that Isaacson is trying to tell, how humanity has been working towards man and machine working together. “Sometimes innovation is a matter of timing,” Isaacson writes. “A big idea comes along at just the right moment when the technology exists to implement it.” The chapter titles already reveal the evolution of this all-important technology: “The Computer,” “Programming,” “The Transistor,” “The Microchip,” “Video Games,” “The Internet,” “The Personal Computer,” “Software,” “Online” and “The Web.” Do you wonder what exactly the Turing Test is? What is Moore’s Law? How did Wikipedia get started? It’s all here.

“The Innovators” discusses the people and companies that made all that happen: ENIAC, IBM, Texas Instruments, Nolan Bushnell, Apple, AOL, Intel, Tim Berners-Lee, Google, among many others. “The Innovators” discusses how the invention of the transistor radio “became the first example of a defining theme of the digital age: technology making devices personal.” Anyone reading this on a smartphone or a tablet knows how far that idea has gotten.

It seems inconceivable that there was a time when the Internet didn’t’ exist, but “The Innovators” explains how the Internet was indeed born in 1973, and how Gates and Paul Allen’s Microsoft drove the personal computer software industry. Isaacson isn’t just reporting cold facts, dates and numbers, he also analyzes what happened, on the technical, business and sometimes even the personal side. He posits, for example, that the best approach to true innovation is “having all three models coexisting, along with various combinations of open and closed, bundled and unbundled, proprietary and free.”

Not an easy read

It’s not an easy read but is an informative one: “The Innovators” should first be read in parts, because only then will you be able to fully absorb how much each person/team contributed to the whole, but the fact that Isaacson bookends “The Innovators” with chapters about Ada Lovelace shows that he is telling the big story about man and machine, about science and art, about power and beauty. That’s why “The Innovators” presents itself as the definitive popular history of the Internet Era and a testament to the infinite human capacity for creativity. “Most of the innovations of the digital age were done collaboratively,” Walter Isaacson writes, adding how “The Innovators” is really “a narrative of how they collaborated and why their ability to work as teams made them even more creative.”