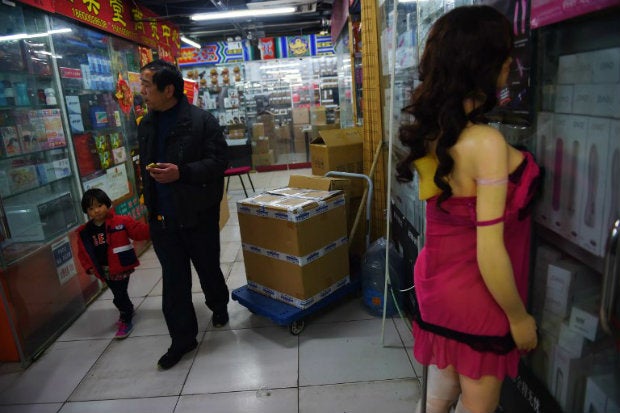 This photo taken on April 2, 2015 shows a man and child walking past stores selling sex toys at a wholesale sex toy market in Beijing. AFP

All dolled up: China sex toys play for real

BEIJING, China – She lay quietly on a narrow bed, greeting potential customers with an impassive stare and a disproportionately buxom form: meet “156”, a stand-in companion for Chinese men with empty beds.

Named for her height, she is a high-quality sex doll made of thermoplastic elastomer, a rubbery material softer than silicone, with adjustable hands, a removable head and genitals, and available from specialist shops in Beijing for around $2,500.

Liu — who did not want to give his full name — has one among the few possessions in his dimly lit studio apartment, deep in an industrial suburb of the capital.

Bachelor away from home

Like millions in China who leave their hometowns to work in the cities, the 29-year-old automobile designer leads a bachelor’s life during the week, returning to his wife and toddler in neighboring Hebei province every weekend.

Liu has been married for more than a decade, and does not want to be unfaithful, but still needs to satisfy his sexual appetites.

“Honestly, it is very easy to just pay a little money to find a woman in China, but I simply cannot bring myself to cheat on my wife, so I have never considered it,” he said with a nervous laugh.

But a blow-up alternative was not an option. “There was no way I would have sex with that kind of cheap inflatable plastic,” he explained.

Her removable parts make cleaning or replacement easier, but despite lengthy prior research — Liu can explain subtle differences between an exhaustive list of Chinese and foreign doll brands – he was disappointed.

“As an industrial designer I can’t neglect the lack of realistic details,” he lamented. “So I just used it a few times.”

“The only way a doll is better than a woman is that it won’t resist, so people can do whatever they want with it,” he added.

Liu bought his doll from Micdolls in Beijing, where salesman Yi Jiange said proudly: “Most people think the dolls are more attractive than real women.”

They come bald, with customers buying wigs for them according to their own preferences.

Some models are also significantly shorter — more akin to child-size — than “156”, for “convenience” according to Yi.

His clients — whose needs and preferences he discusses over a cup of tea — are usually professionals or business owners in their 30s and 40s, and he praises them as morally upright.

“If a married man refuses to see prostitutes and uses a doll instead, isn’t it admirable?”

Buyers include user’s wives, claimed Yi, but he admitted that many clients’ partners “don’t quite accept” such dolls.

“My own girlfriend doesn’t agree with my work that much either,” he added.

China’s puritanical Communist Party decried decadence during its first decades in power, and while conservative attitudes are still widespread, economic reforms have brought the country more sexual freedom, and a plethora of sex shops.

The Chinese sex toy market is estimated at up to 100 billion yuan per year by the business-to-business sex toy platform ChinaSexQ.com.

Currently the life-like dolls — of which “156” is just one of many models available  — represent only a fraction of that.

But Micdolls owner Zhang Han is going into production, expecting business to boom on the back of China’s severe gender imbalance.

In the face of a traditional preference for sons and the one-child policy in the world’s most populous country, sex-selective abortion is common — albeit illegal — and almost 116 boys are born for every 100 girls in China, far above the global average of 107.

As a result it has a growing shortage of women. “Many young men in China have difficulty finding girlfriends or socializing with women,” said Zhang. “That’s why they might use a doll as replacement.”

“Many previously reclusive young men have made friends through the online doll community,” he added. “Having any kind of hobby is better than having none, right?”

He also plans to experiment with a male doll for women.

For some buyers, dolls are not about sex, but love. Calling themselves “friends of dolls”, anonymous individuals gather on dedicated online forums, sharing user reviews and advice.

Their numbers have risen from a few hundred to more than 20,000 in recent years.

One forum user posted a lengthy article titled “My happy life after getting a sex doll”, and another shared pictures of a doll named “Lin Lin” — who has her own account on Chinese web message service QQ — in her new clothes.

Most people initially buy a doll for sex, explained salesman Yi. “Then they will start to dress them up in different costumes… and probably end up naming them like a human being. Eventually some kind of sentiment is involved.”

But for Liu, “156”‘s soulless heart can do nothing to fill the emptiness of his bed.

“It doesn’t satisfy me at all, nor arouse any emotion in me,” he said.

“A doll’s perfection is derived from mathematical calculations, but it will never be more beautiful than a woman because she has a soul, expresses emotions and shows reaction.

“To me it has absolutely nothing that’s better than a real woman, but I can at least try to deceive myself with it,” he confided.