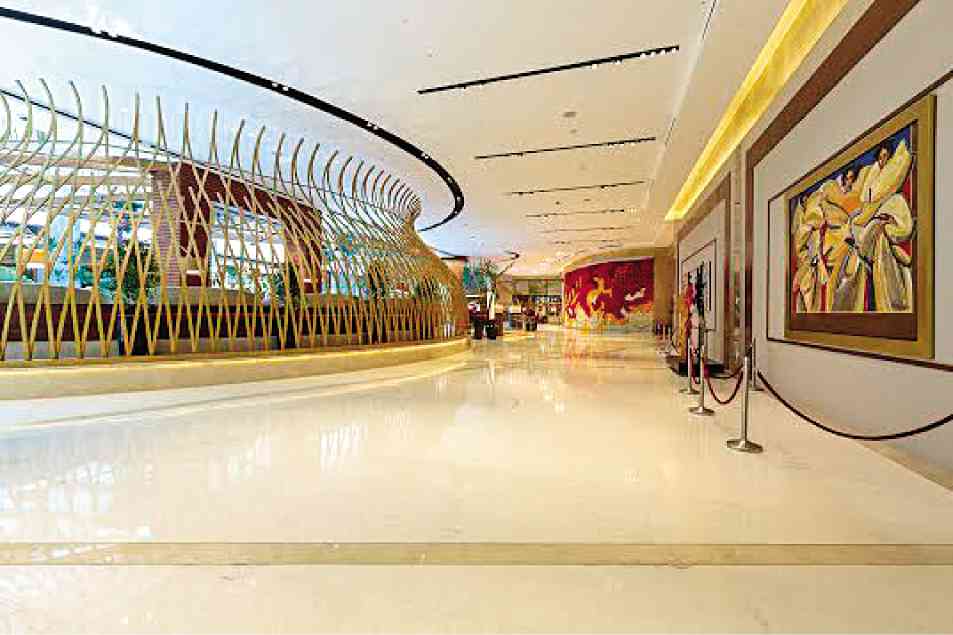 ARTWORKS by major Filipino artists line the corridor of the Sky Tower.

The sprawling $1.2-billion property, Solaire Resort & Casino, has been featured dozens of times since it opened two years ago, but it has another ace up its sleeve which may have gone unnoticed: a vast collection of artworks—about 2,000 pieces overall—that decorates its walls all the way to the employees’ dining area.

That number makes it the casino hotel with the biggest Philippine art collection.

The Sky Tower’s reception displays one of the many art pieces from the personal collection of Bloomberry (Solaire’s holding company) chair and CEO Enrique K. Razon—a massive abstract by National Artist BenCab now valued at $1 million.

Wassmer said Razon commissioned 500 artists to work on the hotel’s art collection, which is an interesting mix of pieces by the masters and the young and upcoming.

The import roster includes the larger-than-life sui generis abstracts of Matthew H. James, the artist from Brooklyn who resided in Solaire for three months to work on over 40 paintings. James is known for his liquid layout technique—uncanny swirls of the galaxies—that produces glossy, lustrous paintings.

Made of wire and wood bark, “Little People,” Cobonpue said, came from an existing product that he modified for Solaire. But it is the divider at Waterside, cut from a single sheet of metal to create a weave-like effect, that was the most difficult to execute.

“They wanted a decorative sculpture, so I thought of creating something like the universe,” he said. It took him five months to finish three commissioned projects for the hotel.

A yet unoccupied shopping hall has been temporarily turned into a gallery that features “The Mona Lisa Project,” where the artist-friends of artist Soler Santos rendered their personal takes on the famous Da Vinci painting.

“Almost everything you see and experience here has been approved by Razon. He loves art. The interior design and lighting have to pass his standards before they get installed,” Wassmer said.

The much talked about chandeliers are bespoke pieces by the Czech design company and manufacturer Lasvit, and come in three central designs. At the lobby is the Leaf design, an imposing cluster of hand-blown glass pieces in individually suspended lines that capture the movement of the downward spiral of leaves.

There’s also the Crystal Terraces, an assembly of flat glass with engraved patterns whose layout pays homage to the rice terraces, seen in grand and small scales within the hotel. And Glass Energizer, seen in the international a la carte restaurant Fresh, with amber, bowl-shaped glass drops hanging on wires.

A portrait painting by the husband-and-wife team, Bojo and Carmel Lim-Torres, as well as black-and-white photos of Tom Epperson, decorate the Red Lantern, Solaire’s Cantonese restaurant.

Last March, Solaire celebrated its second anniversary. As of press time, the hotel has given away P1.5 billion in jackpot hits.

It is working on the property’s Phase 2, where Bloomberry is reportedly constructing three new hotels with 1,500 rooms, 100,000 square meters of retail space, 300 gaming tables, 1,300 electronic gaming machines, and a 15,000-capacity events arena.