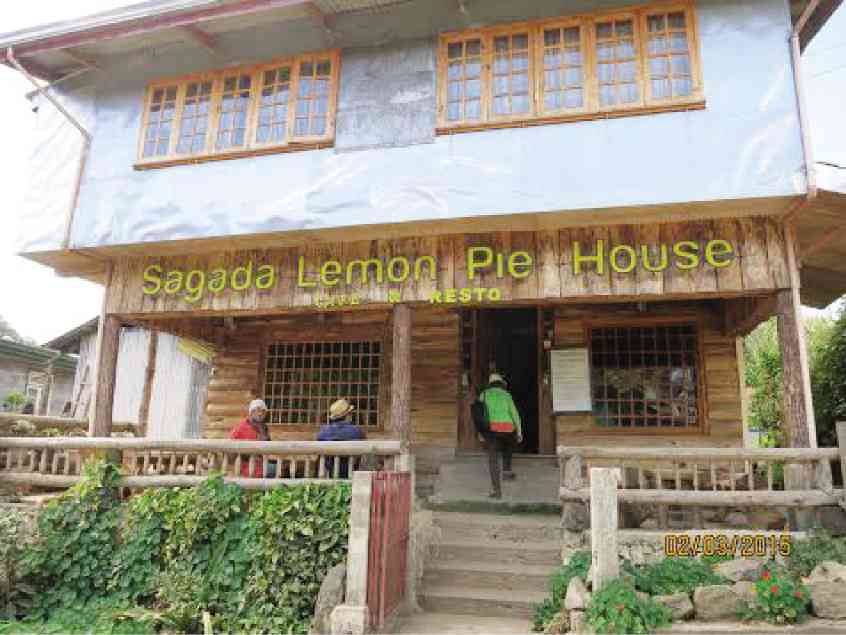 Now that it’s April, the lemon trees are once again bearing fruits in the mountains of Sagada. For Joseph Daoas, it’s the season to gather the precious fruits which he uses for his pies at the Lemon Pie House. It’s not just any ordinary lemon however; instead it’s Meyer lemons, which are sweeter and juicier than the ordinary variety.

Commonly grown in California, Meyer lemons were introduced to Sagada several years ago by a German-Filipino organization, says Daoas.   Later the Bureau of Plant Industry helped the local farmers plant them.

Now they’re in season in Sagada from April to October and that’s when Daoas buys all the supplies he can get from the local farmers. To stretch his supply to a whole year, he cooks the lemons to preserve them and stores them in huge containers. He uses the lemons not just for making his now famous lemon pies, but also to make concentrates which he bottles and sells in his restaurant.

The pie has certainly earned its claim to fame. With a delicate crust topped with dewdrops of a syrupy liquid, it has an honest, homemade simplicity suggestive of citrus fruits and of carefully measured sugar, of loving hands that shaped and rolled and baked the pie. Its smooth texture delivers flavors in increments to the taste buds, now tangy, now sweet, before melting in the mouth in one last burst of citrusy goodness.

Daoas took a long time to perfect this pie. Trials and errors, he says, came before he hit just the right consistency and balance of flavors. Luckily he had a lot of practice before then. The

son of a school teacher and an Ilocano mother who loved to bake, he grew up helping his mother, Elena Felix Daoas, in the kitchen, especially whenever his father would bring home visitors. The lemon pie recipe that he perfected was based on her old recipe.

Before he opened Lemon Pie House, Daoas would sell his pies in sari-sari stores and in the public market, with his wife Katrina helping to deliver them. In 2008, he turned his place into a restaurant, which has since been renovated and polished.

Today Lemon Pie House has become a favorite of Sagada residents and tourists alike. They come not just for the pie but for a sense of comfort and warmth. Shiny, well-polished wooden floors, walls lined with old pinewood and a display of native craft add to the place’s rustic charm. The chairs are likewise made from pinewood while low tabletops were once the roots of giant ferns that grow abundantly in the mountains of Sagada.

Prices are reasonable too. A slice of the lemon pie is just P25; a whole pie is P180; and brewed coffee P30. Meals go for P100 to P150 (except for the pinikpikan which costs P600 and requires prior reservations).

But it’s the lemon pie that really draws the crowd. A sign on the front door advises customers to order in advance if they want to take out pies. Reservations for these pies are taken from 6 a.m. to 6 p.m. only (with the emphasis on “only”).

That’s because they want to bake just enough pies for the day, says Daoas. They don’t want to have any leftovers; they want to serve only pies freshly baked that day.

Leftovers aren’t likely anyway. The day my friends and I visited, there was just one pie in the restaurant. We divided it carefully among ourselves and savored every delicious bite, down to the last precious crumb.