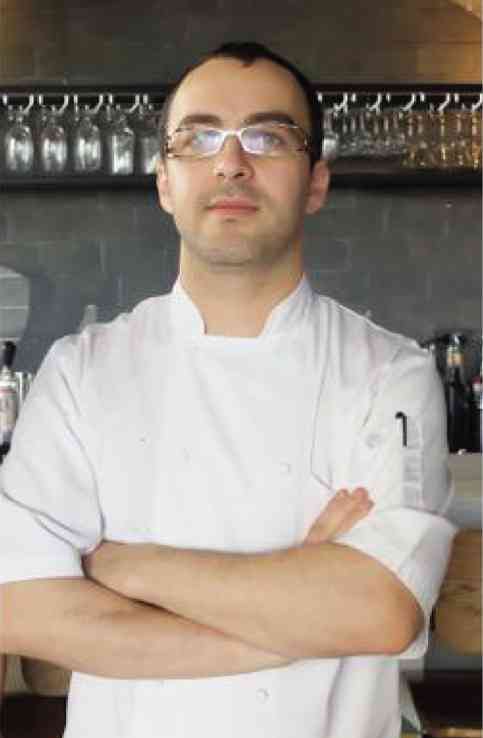 There wasn’t even time to look around and choose what to place on the plate. The jamon was being cut and those red and white streaks were too tempting for me to pass. Cava was also being passed around, refreshing on that hot afternoon.

Humans only have two hands, and one had to look for a place to park the plate and the drink so one could eat and drink. One hoped for a bar, and the next best thing were small cocktail tables and big low tables with seats even.

Filipinos will never get used to eating and drinking while   standing, but that is essentially how a tapas bar works.

That was the early scene at the “Tapas Night” on Saturday hosted by the Spanish Embassy, the “kick-off” to the upcoming grand gastronomy event, Madrid Fusion Manila (April 24-26).

Unlike the Spanish way of bar-hopping, the event was held in the function room of Green Sun Hotel at Chino Roces Avenue (formerly Pasong Tamo) extension in Makati. Guests hopped from station to station, holding wine and food selections.

Tapas is distinctly Spanish, a time to socialize with drinks and a bit of food. It bridges the hunger gap between the end of the working day and dinner, which in Spain usually starts after 10 p.m. The Spanish are proud to say that while the whole world readies for bed, they are just beginning dinner.

For the rest of us, sometimes tapas should be enough. And from the amount of tapas that night, it could have been our dinner.

People swarmed around tables to partake of many kinds of queso, chorizo, jamon and wine. Sometimes even before they could place the little plates and bowls on the table, waiters had already been divested of their serving pieces by guests who met them in the walkway, eager to get to the food ahead of the rest.

For instance, the pinchos (skewered) of fried pork with peaches and mushroom were so impressive that the people took them before they could be laid on the table.

A look on the menu later disclosed them to be Cochinillo de Brochetas confitado con Pedro Ximenez y Melocotón (Suckling Pig Confit Skewers with Pedro Ximenez and Peach). That should settle the debate that night if the pork was lechon or chicharon bulaklak (fried intestines).

It is difficult to assign the dishes to any of the six chefs who cooked that evening. All of them were Spanish chefs of tapas bars and/or full-fledged Spanish restaurants in Manila.

Because Juan Carlos de Terry of Terry’s was at one table supervising, we presumed that the skewered pig was from him or his cochef, Carlos Garcia of Black Pig; both represented the Central and South of Spain.

Juan Carlos is from Cadiz, a narrow strip of land and a port city. From that same grouping I liked the Milhojas de Cabrito, shredded kid goat in sherry with onion marmalade pressed between two lavosh (cracker) pieces.

Did I get to taste the octopus? No, I said with a guilty grin, and the eating group rubbed my bad luck in when it pronounced the pulpo a la Gallega (octopus Galician style), “So good!”

The octopus dish came from the chefs representing the northern region—Chele Gonzalez of Vask and ArroZeria, Nicolas Diaz of Barcino and Pablo Lopez of Donosti.

But I did get to taste the paella with octopus and squid ink, in which instead of rice, fideuá or thin noodles were used by the East Group (Basque and Catalan) of Pepe Lopez of Las Flores and Ramblas and Ivan Saiz also of Vask and ArroZeria.

Oh yes, there were tapas desserts, though I tasted only the churros con chocolate. I would have given up one skewered pig for the sorbete de sangria.

Wines were flowing, as they should for a tapas party.

Sparkling cava greeted us at the entrance. We moved on to sherry, also known as manzanilla, which made the Filipinos giggle because they associated the name with medicine for a bad tummy. We were going to need the other kind of mazanilla (chamomile) because of overeating.

But the most exceptional red was Ramon Bilbao Limited edition, smooth and full-bodied.

Before the event, I was able to sit and chat for a very short while with three chefs—Juan de Terry, Chele Gonzalez and Nicolas Diaz.

When asked why they decided to cook here, Gonzalez and Diaz said they had been here on vacation and felt a historical kinship with the country. So when the opportunity came to work here, they accepted.

Terry had lived and worked in Mexico for more than a decade, but he said Filipino palates are more open to other flavors.

Many of the chefs have incorporated Filipino ingredients in their Spanish dishes.

Gonzalez said he has plans of opening another restaurant, La Rioja, which would feature all-Filipino ingredients and part of the profits of which would support a cultural community in the Cordilleras.

Whatever compelled these Spanish chefs to live and work here, they have certainly upgraded and updated the Spanish food we used to know. And, in the process, they have taught our chefs as well how to do the same with Filipino cooking.