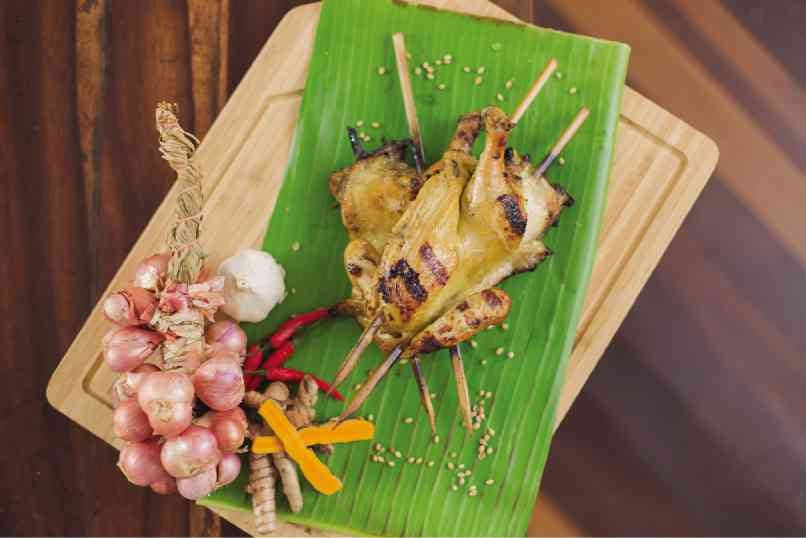 For award-winning cookbook author, foodie and restaurateur Amy Besa, adobo should be cooked the proper way—from choosing the right vinegar to creating the right coloring and browning of the dish. Moreover, what to pair your adobo with must also be considered.

Besa cites three important aspects of preparing adobo that would make it distinct: first, the type of vinegar and protein to use; second, the color; and third, how you finish it—either dry or wet.

“Critical is vinegar,” says Besa. “The kind of vinegar you use will help bring out the real flavor and taste of your dish.”

A lot of people prefer commercial vinegars; some use native ones like basi, sukang Iloko or Paombong. Others prefer fruit vinegars or imported rice vinegars.

Color can be natural if one uses only salt in adobo.

“If you add soy sauce, it becomes brown,” Besa adds. “Others use turmeric, which makes a yellow adobo, and atsuete (annatto) which makes adobo orangey-red.”

Finally, after braising the meat, you have to decide how you want the adobo to look before serving.

“One way is not to finish it so you keep the meat in the sauce. I prefer my adobo sort of ‘finished,’ like browning it in the pan and serving the sauce on the side. I sometimes broil or grill it,” she says.

Besa, with chef-hubby Romy Dorotan, has been playing around with various adobo recipes utilizing ingredients native to the Philippines.

Besa Pork Belly Adobo cooked in basi and atsuete, for instance, has been a hit in the couple’s restaurant, Purple Yam in Malate.

Just recently, Besa came up with Turmeric Chicken Adobo, using organic chicken seasoned in tamarind vinegar from Abra. Besa gets two kinds of vinegars from the province—mango and tamarind. She uses the mango for beef short-rib adobo.

For the chicken adobo, she works on tamarind vinegar with turmeric oil, which also adds a subtle nuance to the dish.

“We’ve developed this adobo using the turmeric oil recipe of Romy (who runs Purple Yam in Brooklyn) as marinade. It is still an adobo dish because the organic chicken is braised in tamarind vinegar and garlic. It is finished either in the oven or on the grill to get the ‘Maillard reaction,’ giving the chicken that tasty caramelized flavor.”

The chicken is also blended with lots of garlic, organic peppercorn, bay leaf and Zambales sea salt. It is then skewered, grilled and served with tamarind vinegar on the side.

It’s a new, refreshing take on adobo, especially with the smoky flavor further enhancing the pleasing sour-salty taste of the tender meat.

Growing up in Malate, Besa remembers how she disliked eating the family adobo served on the dinner table.

“I grew up hating our adobo because it was full of soy sauce,” she recalls. “I really hate adobo with soy sauce, but I was forced to eat it. So, when I went to the States and I was in a position to manipulate my own food, that was when I enjoyed eating adobo.”

In the US, she’d either use organic apple cider vinegar or Japanese rice vinegar. She often makes chicken adobo because that’s what’s easily available.

“What do you do with your chicken? You either roast it or you make it into adobo,” says Besa.

She also likes her adobo either dry or with very little sauce. She separates the braised meat from the sauce and allows the meat to air-dry. Then, she reduces the sauce to a very thick consistency before returning the meat to the sauce.

“Our clients in the US also love our chicken adobo sa gata (coconut milk). Even the Caucasian kids order it,” says Besa.

Apart from the garlicky flavor, Besa and her husband enjoy their adobo with lots of chilies for that extra kick.

“Chilies also give flavor and some nuances. Romy likes Thai chilies. I love jalapeno or siling haba,” she says.

Unlike other adobo variants swimming in fatty oil, Besa claims theirs has no fat since they deliberately remove the fat before or after cooking.

“For one thing, our chicken is not fatty. We use organic chicken,” says Besa. “We also prepare our adobo the day before and store it in fridge to further develop the flavor overnight. When the fat solidifies, we remove it.”

She adds: “That’s how we cook anything Filipino, like sinigang. When we boil the broth, I remove the meat and separate it from the broth. I put the broth in the fridge and when the fat forms, I take it out. When I serve it, it’s healthy and clear.”

But, nothing is put to waste. Besa uses the fat for frying.

Which one is the national dish for her, adobo or sinigang?

“The way Doreen Fernandez said it, the adobo can be the national dish and sinigang as the quintessential Filipino dish,” says Besa. “It has distinction. Sinigang is quintessential, which means it really represents us. But, more people cook and eat adobo than sinigang, especially abroad. In my experience, people take on adobo easier. If you want to win people over to Filipino food, they are drawn more to adobo. In short, adobo wins people over faster than sinigang.”

salt and pepper to taste

Trim and debone the chicken in quarter pieces. Or, portion it as you please. Just be careful not to damage the skin. Set aside.

Cut the onion into thick quarters. Smash and roughly chop the garlic. (It’s important to not cut the onions and garlic too small so it would hold up in the braising process.)

Peel and cut the turmeric into pinkie-sized pieces.

Slit a cut in the middle of the siling labuyo. (The quantity of the chili is entirely up to your discretion. If you want it to be spicy add some more.)

Lightly pound the head of the lemongrass with the back end of your knife to release the oil and aroma.

In a large shallow pot, heat the turmeric oil then sauté the onion, garlic and coriander seeds until onions are translucent.

Deglaze the pot with tamarind vinegar and soy sauce, then add the water.

Simmer until the liquid has reduced in half.

On low heat, add the chicken pieces, skin side down first. Place the thigh and leg part first, then the wings and lastly the breasts so it all cooks evenly at the same time.

Cook the chicken for 1 minute and 30 seconds on each side until the internal temperature reaches to 140 ºF.

Place the half-cooked chicken on a rack and strain the braising liquid a bit more.

After cooling down the liquid and the chicken, place in a container and combine the braising liquid and chicken marinating the chicken for at least 1 hour before grilling and putting it in the oven before serving.

Optional: Put the chicken pieces on bamboo skewers for easy grilling and a more dramatic presentation at the table.

Peel and slice the shallots. Crush the garlic (don’t peel). Peel and cut the turmeric, slice the sili in half and smash the head of the lemongrass.

In a small pot, combine all the ingredients together and turn on low medium heat, when the oil starts to bubble, turn off the heat and let it cool.

Keep in glass or plastic container. No need to refrigerate. Lasts up to one to two weeks.