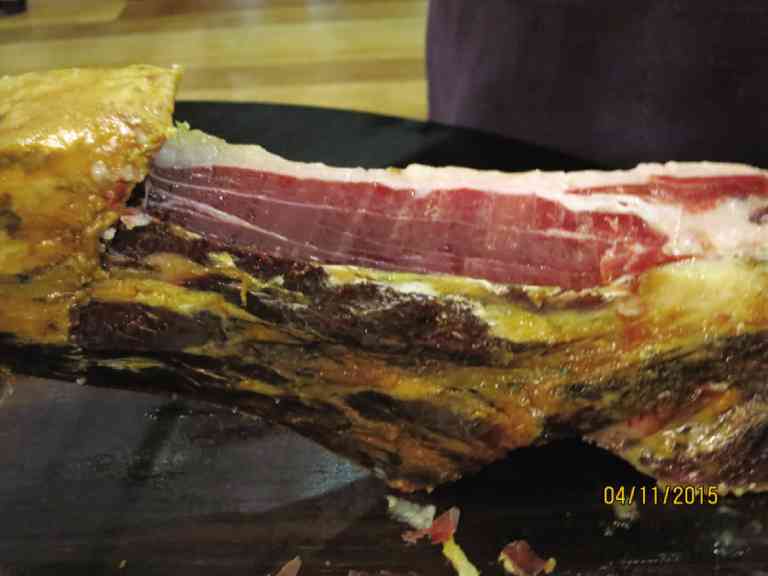 IBERICO ham in the Tapas Night PHOTOS BY GOLD QUETULIO

“Go right away,” Mari de Terry urges my friend Gold and me. “Go before the ham is all finished. Usually when we serve ham, it’s gone in 30 minutes.”

Like obedient children, Gold and I hurry over to the center of the room, where a man from Terry’s Selection is carving paper-thin slices of Jamon Iberico. There’s a long line of guests waiting to be served Spain’s most coveted ham, and we quickly join the queue.

Just looking at the leg of ham can spark a craving deep in the recesses of one’s soul. It’s an appetizing rosy red, with delicate marblings of fat. No ordinary ham, it comes from pata negra, the indigenous black-foot pigs which graze on acorns and aromatic plants in Spain’s unique ecosystem region called the Dehesa.

Curing it takes years; the legs of ham are salted and dried and are left to hang in special barns with open windows so the cool air can circulate around them as they “ripen” in the stillness of Spain’s mountainous regions.

Soon, the leg of ham in front of us is carved to the bone, and every bit of ham is taken—but not before Gold and I get our share and taste its exquisite flavor. Supple, tender, it’s smooth and mellow, whispering of a complex balance of sweetness and saltiness. The nuances of flavor linger on the palate, stirring desire, creating taste memories.

Elsewhere in the capacious hall of Green Sun Hotel there are other things to savor. It is, after all, Tapas Night, a celebration of regional Spanish food and wine organized by the Embassy of Spain and the Spanish Economic and Commercial Office, with no less than Spanish Ambassador Luis Calvo, Economic and Commercial counsellor Enrique Feás Costilla and Undersecretary of Tourism Benito Bengzon welcoming the guests.

And what a feast has been laid out.

Many of the tapas are contemporary takes on the traditional ones.

Cochinillo from the Central and Southern regions is transformed into croquetas served with aji sauce.

Pulpo a la Gallega from the North is enhanced by a cream of cauliflower, while coca, a popular tapa in the Eastern region, is made with puff pastry (instead of plain bread) and is topped with roasted vegetables and black olive paste.

There’s also fideua, noodles simmered in octopus and squid ink, foie gras mousse with mango toast, an abundance of cheeses, from Manchego to Mahón, from the Spanish blue cheese Valdeón to the wine macerated Murcia al Vino as well as a variety of chorizos (del Rioja, Pamplona).

The Spanish wines and liquors are overflowing—sparkling Cavas, San Valentin and Gran Sangre de Toro from Torres Wines of the Penedés region, Ramon Bilbao Reserva and Real Madrid from the Rioja region and Brandy de Jerez from the South.

I am reminded of previous visits to Spain, when the Spain Tourism Board whisked me from Barcelona to Valencia, to Cuenca and Madrid, to experience and savor the best of Spanish food and wine.

“This is like hopping from one tapas bar to another in Spain,” says Jun Santos of the Spanish Economic and Commercial Office.

Indeed it is, but it’s also just a prelude to the bigger event this month: the Madrid Fusión Manila, slated for April 24-26 at SMX Convention Center.

For this gastronomy congress, chefs from Spain as well from other Asian countries will join forces with Filipino chefs to conduct forums, talk about food trends, show their mastery of culinary techniques, and prepare their own specialty dishes.

A trade exhibit will showcase premium food and wine and food service equipment. There will be tasting seminars and degustación of wines, cheeses and olive oils.

Just before we leave, dessert is brought to the tables. There’s the inevitable churros con chocolate, and also dried figs and apricots, almond turrones and large chunks of chocolates generously studded with nuts.

My mind wanders to Toledo, where once a group and I visited the Delaviuda factory which makes the most scrumptious marzipan and nougat confections. At that time I couldn’t resist

buying several packs of turrones, to eat during the trip and to bring home as pasalubong.

This time the confections are as irresistible as they were when I saw them in their Toledo factory some years ago. Gold and I reach for some chunks of chocolate and turrones and savor them with a goblet of Torres wine.