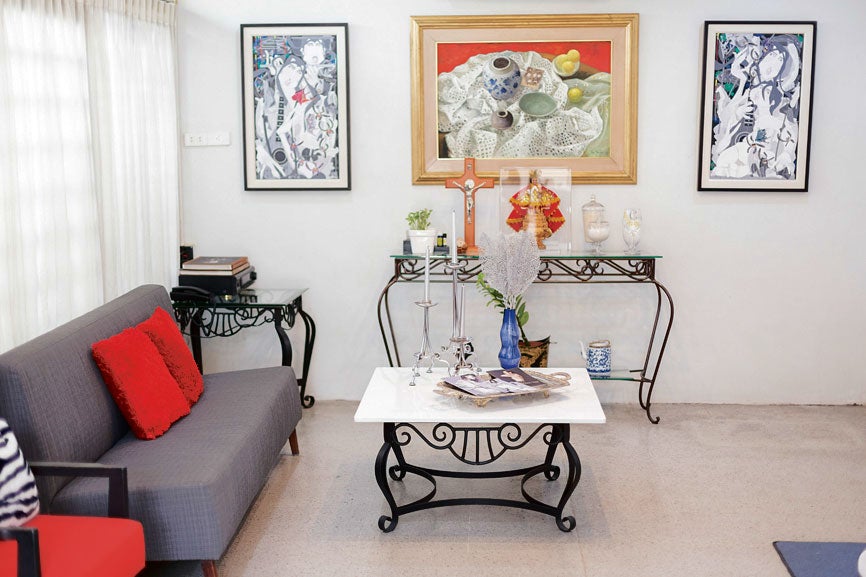 When Rosenthal Tee came home in 2013 to start her fashion business, the management economics graduate from Ateneo de Manila University had three family-owned properties to choose from.

Tee was away for almost two years taking up fashion design at Istituto Marangoni and short courses at Central Saint Martins in London. She was raring to work, and choosing the right business address was crucial in making her fledgling enterprise succeed.

She chose a two-story house in Marikina that was once a warehouse of her dad’s shoe business, over a property in a gated village and a condo unit.

“Friends were telling me to open in Makati,” she said. “But when I visited the three properties, the vibe in Marikina was what really appealed to me.”

Another advantage is that the house is only 30 minutes away from Tee’s Quezon City home.

Tee turned the living room into a receiving area furnished mostly with refurbished furniture pieces such as sofa, boxy office chair and ottoman from her parents and grandparents.

Instead of leather, Tee had the furniture pieces reupholstered in such fabrics as fire-engine red and dark gray plaid. She opted for thicker seat cushion for the retro-looking office chair with wheels that once belonged to her lolo.

“I was aiming for a Bauhaus look by going for such a combination,” Tee said. “Red and gray were also a play on masculine and feminine elements.”

Her favorite colors, royal blue and silver, are in a number of items, including accent pieces on the coffee table and curtain.

“I decided to include pops of red because they echo the exact shade my Sto. Niño image is wearing,” she said.

The wooden image, which her parents bought on a trip to Cebu, is encased in glass next to a wooden crucifix with a silver image of the crucified Christ. Tee’s mother, who used to design wedding shoes, is a Sto. Niño devotee.

“I grew up imbibing the scent of leather,” Tee said with a laugh. “People thought I’d follow in my parents’ footsteps. I considered it at first, but I realized I wanted to do something else. But I’m not closing my doors on designing shoes, especially for my future brides.”

From her family who collects artworks, Tee borrowed from her parents a pair of acrylic paintings by Jeff Dizon and an oil painting reminiscent of Araceli Dans’ style by Jun Tiongco. The paintings hang on a wall behind her religious images.

Instead of facing the street, a frosted glass signage bearing the designer’s name is mounted on the garage wall and faces the living room. Such an attempt at being low-key seems opposed to most millennials’ penchant to draw attention to themselves.

“I didn’t want anything flashy,” she said. “Since I love to write, friends have also been encouraging me to blog about my clothes. If I do that, it would probably eat up most of my time because I tend to get bogged down by details.”

The creative process—from sketching and fabric selection, down to cutting, beading and sewing—all happens on the second floor. Tee has a huge glass-top table all to herself where she sketches and chooses fabrics.

Behind her is a whiteboard where she writes down her ideas.

Tools of the trade such as sheets of paper, pencils, Pantone markers, fabric swatches, lace appliques and a tape measure are strewn on top of her working table.

“I know how to design using computers,” she said. “But I still prefer to do it the traditional way. To minimize errors and make it easier for my staff to do their work, I decided to color my illustrations.”

Since she also loves to jot down notes and take photographs, her influences aren’t limited to clothes she sees in fashion magazines and on the runway. They’re as myriad and as interesting as the people and architecture she encounters on her travels.