At Manila's autism-friendly cafe, it's A-OK to be different | Lifestyle.INQ ❮ ❯ 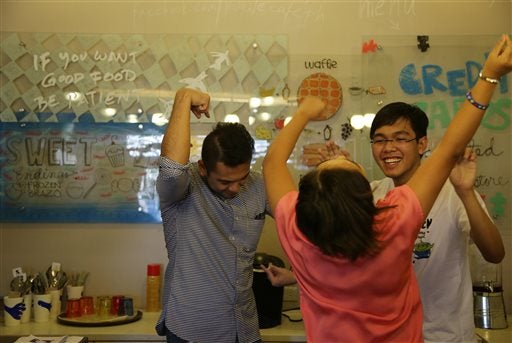 In this April 7, 2015, photo, Jose Canoy, 20, right, a trainee with autism, plays with his siblings, Jose Antonio, left, and sister Isabella inside the Puzzle Cafe which their family co-owns in suburban Quezon city, north of Manila, Philippines. The autism-friendly cafe offers a welcoming space for both autism-impaired young workers and families of children with autism. (AP Photo/Aaron Favila)

At Manila’s autism-friendly cafe, it’s A-OK to be different

MANILA, Philippines— Guided by a therapist and cue cards, Jose Canoy carefully removed a waffle from the griddle, turned off the waffle maker and asked for a serving plate from the kitchen staff at Manila’s brightly-decorated Puzzle Cafe. Each of Canoy’s next moves were similarly laid out in index cards with pictures: A script for greeting customers, offering them the menu, serving the food and finally handing out the bill.

Canoy, 20, is among seven trainees with autism at the small cafe, which aims to provide its workers a place to assimilate into society, improve social skills and spread awareness of the poorly understood disorder, which the World Health Organization estimates impairs about one child for every 160 worldwide.

Canoy’s elder brother and co-owner of the cafe, Jose Antonio, said his family decided to create the coffee shop to help his younger brother become productive and secure his future. The family also wants to promote autism awareness and to train others like Jose to help them find permanent, paying jobs and avoid being ostracized. Two other apprentices have Down syndrome and most of the trainees are in their 20s.

“We’re out here to show people that being different is not bad,” Jose Antonio Canoy said. “You can live it.”

The autism-friendly cafe, with Thomas the Train toys and picture puzzles on its shelves, opened in November and held a grand opening ceremony April 11, in time for Autism Awareness Month. The puzzle piece is a global symbol of autism.

Cards and crafts made by young people with autism are sold in the cafe, where odd-shaped tables are paired with brightly colored chairs. A leaf-shaped wooden table bears these words, painted in red and black: “If you think I’m puzzling, imagine what the world is like for me.”

Dr. Anna Treichler, a developmental and behavioral pediatrician in Manila, said working in the coffee shop helps people with autism because it allows them to develop their social interaction skills.

“We take them from the home, to the therapy, to the school, to the wider community because the aim is full assimilation, or assimilation to the degree that is most possible for that particular individual,” she said.

The cafe has three paid chefs — including one with autism but who is highly functioning — and a salaried cashier. The nine trainees with autism and Down syndrome who cannot yet work independently do not receive salaries, the owners said. Jose, however, receives money from his parents for the work he does at the cafe.

According to the WHO, autism spectrum disorders are complex brain development disorders characterized by difficulties in social interaction and communication and a restricted and repetitive set of interests and activities. People with autism often suffer from stigma and discrimination.

Josephine de Jesus, a Manila-based speech and language therapist, and others with training work with the trainees. She said the cafe’s autistic staff at first had to be pushed to work, and some were upset about changes to their routine schedule. She prepared scripts for them so they can start conversations with customers.

“As we are going on with the operation, we found that they can come up with their own scripts outside from what we have trained them to use,” she said. “And I think that’s great that they are becoming more spontaneous.”

Unilab Foundation’s Project Inclusion, a supporter of Puzzle Cafe, partners with schools and organizations to research and promote employment of people with disabilities. The foundation of pharmaceutical company Unilab has done a study showing the benefits of hiring people with disabilities, and is developing a human resources manual to equip companies willing to hire them.

Project officer Grant Javier said the foundation itself hired three people with autism. One is a graphic artist who turned out to have another special talent — he can efficiently and quickly process tall stacks of reimbursement receipts and reconcile piles of checks.

Mona Magno Veluz, national president of Autism Society Philippines, said there are no studies on autism prevalence specifically in the Philippines, but notes that the U.S. Centers for Disease Control and Prevention says studies in Asia, Europe and North America have found that about 1 percent of the population has it.

That would suggest that in the Philippines, a nation of 100 million, there are about 1 million people with autism. But Veluz said just 100,000 Filipinos have been formally diagnosed, and only half of those have received intervention like therapy or special education because of a dearth of experts and trained professionals. The country has only around 50 developmental pediatricians, and less than a thousand occupational therapists and speech pathologists, she added.

Veluz, whose son Carl works at Puzzle Cafe, said the shop has made autism friendliness a selling point in its business strategy, creating a template that other businesses can follow.

“I feel that I belong,” said Rina dela Paz, who ate at the cafe with her husband and two sons, including her 7-year-old boy with autism. She said it comforts her to know there is a place her family can go and talk to other families who also live with autism, without worrying about getting stares or disturbing other people.