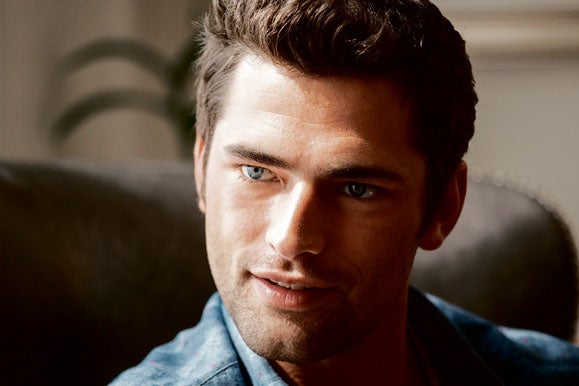 A Super date with Sean O’Pry

“What’s the craziest thing you’ve done in the name of fashion?” I asked Sean O’Pry one sweltering Friday afternoon, and his reply was instantaneous. “Can’t tell you that,” he said coyly, sky-blue eyes twinkling with mischief.

“OK, it’s getting very hot in here,” I said, and he let out a big, hearty laugh.

Truth be told, the thought of sitting face-to-face with the guy hailed by Forbes and Models.com as the world’s most successful male model was a little unnerving. This was, after all, the guy whose piercing gaze and chiseled features have had people exclaiming, “Oh my God, look at that face!” ever since Taylor Swift’s “Blank Space” music video came out late last year.

With the video getting over 7.5 million YouTube views, has he gotten tired of people greeting him with “Blank Space” lyrics?

“She practically ended up killing me in the video, so… They greet me a lot, and I just remember my death,” he said wryly.

Before he became known as the “Blank Space” hunk, the 6’1” 25-year-old American supermodel was already strutting on the catwalk for global luxury brands Armani, Versace and Givenchy, to name a few. He’s also graced the pages of countless glossies for fashion editorials, brow furrowed and lips slightly puckered in that brooding, sensual James Dean frown.

The Kennesaw, Georgia, native was singled out from his prom photos on MySpace by fashion industry bigwigs when he was just 17. He quickly climbed the ladder to become the world’s top-grossing male supermodel to date.

Intimidating credentials, indeed, but as the interview progressed, we realized that the guy sitting across from us was anything but intimidating. Granted, Sean was, in true “Zoolander” fashion, ridiculously good-looking. His smoldering stare really does pack a bigger punch than a stun gun in person, especially when he’s looking intently at you, waiting for your next question.

But there was a warmth and natural friendliness about him that put you right at ease, and it was also evident in the way he laughed and joked around with everyone. Finding out that he had a wacky side was a pleasant surprise.

(READ: Sean O’Pry in the Philippines: “I don’t know how I’m ever going to leave”)

As Penshoppe’s new ambassador, Sean’s sizzling photos for the brand’s Spring/Summer 2015 campaign have been making the rounds in local media, a prime example being that giant billboard along Edsa’s Guadalupe-Rockwell area.

When we complimented him on his photos, he paused and looked to Penshoppe brand director Jeff Bascon for confirmation. “Salamat? Salamat. Yeah. Opo, opo,” Sean said proudly, and we all laughed.

Despite a tight schedule for his five-day trip to the Philippines, Sean looked relaxed and very much at home, clad in a chambray button-down shirt, white tee and dark blue jeans—an outfit that, he says, reflects his personal style.

Any favorite pieces from Penshoppe’s denim collection? “Oh, yeah! I’d take you to my room, but that’d be weird,” he quipped, grinning. “Yeah, I pooled a lot of things. It’s great, it’s so fashion-forward, and they’re doing so many great things right now, so I’m really excited to be an ambassador and part of this campaign at the moment.”

When we asked him about meeting his Filipino fans, he said, “I am ecstatic about the meeting tomorrow. I cannot wait to meet them and just be humbled by the whole experience.” He paused. “I’m so nervous…”

If he was, it certainly didn’t show the next day. Amid deafening shrieks, Sean rocked the runway at the Penshoppe Denimlab Fashion Show.

A surprising discovery is that Sean is actually quite talkative. He grew especially animated while talking about his recent trip to El Nido, Palawan. “It was incredible,” he enthused, face lighting up.

“I woke up at 4 in the morning every day, ’cause jet lag is a beautiful thing,” he deadpanned, drawing giggles, “and I just spent all the time outdoors. I mean, once you wake up in Lagen Island, you wouldn’t want to be inside. It’s gorgeous.”

While there, he picked up a new habit. “I started running, because there’s not much to do at 4 in the morning in Palawan,” he shared. “You get a tan, and you go snorkeling, but there’s a chance you might get eaten. There’s no fishing. You can hike, but you can’t see anything, so running’s good.”

In between raving about tocino (“Now that’s some good stuff”) and recounting his comical misadventures with traditional fishing in Palawan, Sean has come up with a plan to avoid getting stuck in Manila traffic next time. “I hear that when Manny Pacquiao fights, there’s no traffic. Why don’t we come here when Manny’s fighting, and then we do all of our road trips? We’ll get everywhere in five minutes!” 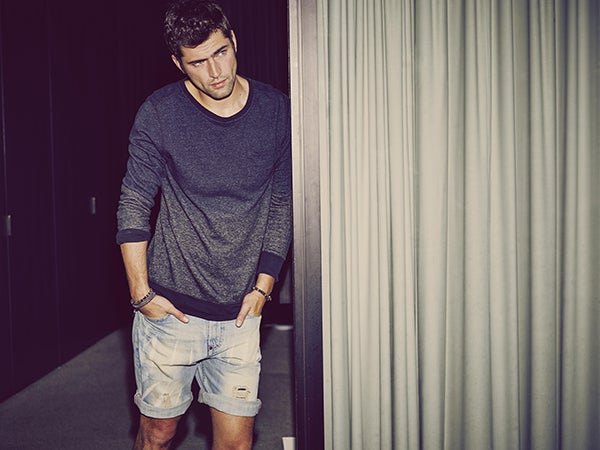 He’s also eager to learn as many Tagalog expressions as he can. When he realized that Inquirer Super editor Pam Pastor was videotaping the whole interview, Sean comically wagged his finger and, after a few seconds of coaching from his audience, said “Ikaw ha!” and the entire room burst into laughter.

Any takeaways from his first (and hopefully not last) trip to the country? “Yeah. I found out I’m really bad at snorkeling and traditional Filipino fishing,” he said with a chuckle. “I’ve gotten really, really proud of my elbows lately. I got a tan in Palawan, so these things are golden right now. And I found out my hair goes really, really curly in Palawan. It’s very unmanageable. I wore a lot of hats.”

For someone who’s claimed to have experienced “a very long period of being awkward” growing up, Sean sure doesn’t look like it. “Well, you’re not hearing me answer these interview questions. I’m still awkward,” he said, laughing. “Ask me in five years—we’ll see if I’m as awkward as I am now.”

Awkward or not, he has to live up to the title of the world’s most successful male model, and it’s genuinely admirable to see that it hasn’t gotten to his head. “I feel like you just have to be very appreciative of the circumstances you’ve been given,” he mused. “You have to honor what you’ve been given and be respectful to everyone around you.”

What keeps him grounded? “My family and my friends, people close to me. And not taking things for granted, like being able to go to Palawan and coming to Manila for the first time. And seeing the beauty in things like that,” Sean said in earnest.

“The Liu family and Penshoppe in general have just been so welcoming, and they made this experience one of the most fun things I’ve ever done in my life. I’m very proud.”