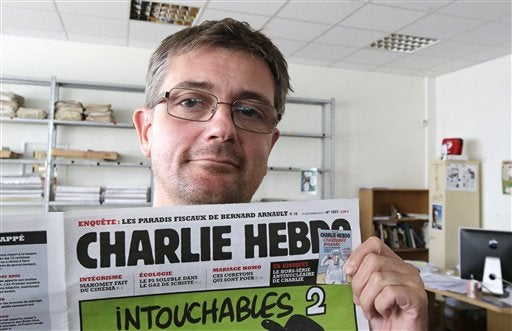 In this Sept.19, 2012 file photo, Stephane Charbonnier also known as Charb , the publishing director of the satyric weekly Charlie Hebdo, displays the front page of the newspaper as he poses for photographers in Paris. AP

PARIS — The late former editor of French weekly Charlie Hebdo takes on politicians, the media and “Islamophobia” as thinly veiled racism in a posthumously published book that was completed two days before he died in France’s worst terror attack in years.

Stephane Charbonnier, known as Charb, was one of 12 people killed by gunmen in the Jan. 7 attack against the offices of the satirical newspaper in Paris.

The book, whose title translates as “Letter to tricksters of islamophobia who are playing the game of racists,” was released in France Thursday. It criticizes those who exploit Islamophobia for their own ends.

Like the newspaper, known for lewd and often insensitive humor, the book takes on many sacred cows. Yet it contains only words, not caricatures — Charlie Hebdo’s signature offering.